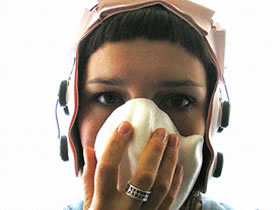 Miguel Álvarez-Fernández, young sound artist and sound designer ( Madrid , 1979), defines his background as a conventional one. Composition studies at the San Lorenzo de El Escorial’s Conservatory, composer in residence at the Madrid “Residencia de Estudiantes” from 2002 to 2005, improvement courses in Germany at the Internationale Ferienkurse fur Neue Musik of Darmstadt, at the Stockhausen Stiftung of Kürten, and at the Elektronische Studio of the Technische Universität of Berlin.

Apart from some activities related only with electronic music  the score for “A Via Láctea” by the Brazilian director Lina Chamie , presented during the 2007 Cannes Festival, and the music for the electroacoustic concert/performance live at the Neues Kunstforum in Köln, next 10 th November , his current work mixes and hybridizes electronic and artistic media in a research devoted to the connections between sound, art and physiology .

Works born from Álvarez-Fernández‘s research use electronic media united with traditional instruments and voice. He is writing a Ph.D. thesis in Musicology at the University of Oviedo that studies the connections between voice and electro-acoustic media. These theories are also the object of the DissoNoiSex project (the trio Álvarez-Fernández, Kersten, Piascik), where Álvarez-Fernández has developed interactive installations such as Soundanism and Repressound.

The work explores the idea of control in an interactive system and lies on the border between public and intimate event, between consciousness and dream. The work evades the categorization as a single installation, as a performance piece or as a musical instrument, but invites for interaction, either by trying to control and dominate the system, or simply by relaxing and just breathing.

Miguel wrote an illuminating text on this argument, ” Del diálogo a la ilusión de control: Procesos interactivos en la instalación sonora Sonanismo“, that starts examining Sonanismo and then investigates those aspects through the notion of interactivity. The work is analyzed in all its conceptual and material elements, describing in detail its lay-out, and voluntarily omitting the particulars related to software and technology, to emphasize the conceptual meaning of the installation.

Key themes at the base of the work and of the artist’s thoughts emerge with the evidence of a perfectly written theory: the work poses some aesthetical problems related to interactive processes. Sonanismo proposes a critical reading of some typical hypothesis of the creative environment that surrounds digital, electronic and media art. Interactivity itself has now gained a stratification of meanings, often connected with positive and creative connotations, but it still should be the object of numerous questions, sometimes ironical, that the work wants to arouse. interactive work mean?> says the artist. <[] Is there a sort of direct relation between this term and the contemporaneousness or modernity of the work? [] Can interactivity be considered as an aesthetic value? []. Inside the work, the function of the subject, the soundanist, cannot be separated from the object itself, the installation, in a way that joins them together continuously, in a constant feedback process>.

In this sense, the idea of interactivity as a dialogue is investigated through a process that shows all its limits and sometimes its impossibilities. It is the breathing of the subject itself that generates an answer from the object, which is in this case another subject, or, better said, “the other” that lies inside the uncontrollable respiration and the unconscious of the person who is breathing and listening.

In this dialogical situation, the soundanist accomplishes his involvement in the process of activation of this mechanism becoming both producer and consumer of the work. The consciousness of this duality appears during the time-lag after which the sounds arrive to the visitor, following a delay the authors used to make less direct and immediate the impression of an answer and therefore the control of the work.

The dialogical component is thus performed through a constant wait, a curiosity, a communicative tension and through the attempts to dominate the mechanism of the installation itself. This dichotomy is also present in our relations with music and sex, as sharply points out again Álvarez-Fernández.

The constant contraposition inside the installation between image/sound, public/private, outside/inside, body/mind, material/immaterial, subject/object, conscious/unconscious, human/animal, technology/biology, is itself part of an attempt to refer to the other , both in terms of sexuality and music, two areas where there is a possibility or a need to get access to the other or to the alter ego which is inside everyone.

Interactivity is also, for Miguel , a way to underline the political dimension of art, in a cultural and social sense. He affirms that it is necessary to be conscious of the fact that we decide to play the game and that this is something we like. Interactivity is a way to experience and share even the less evident aspects of our society and culture and all our doubts about them.

The crucial point that Álvarez-Fernández wants to enlighten is that sound and music, like sex, often seem to be the result of spontaneous attitudes, but they are actually products of different forms of education and cultural practices. Every work proposes a platform that allows for the implication of the visitor, so he can enjoy experiences that try to represent the processes also found at the core of different cultural, social and political practices.

This project tries to outline a parallel cartography of the histories of music, sound and sexuality. < The categories through which we think about music change through time  says Álvarez Fernández , and because of this fact the very concept of music is -must be- equally malleable, flexible, open []>. He points out: .

Another important and interesting aspect of Álvarez-Fernández’s research is related to the idea of voice as a primary interface  in its different modulations, sounds, breaths, sighs, words, accents, pronunciations , as the first medium through which we express ourselves and represent the world. Voice (along with language, a cultural system full of significations) is an emerging element of the installation Repressound , which DissoNoiSex is now developing. Reality and its representation compete with each other inside the installation through sound and images. Fragments of black-and-white films are projected on an extended screen on the surface of a room. The furniture and the walls are painted in black and white, similarly to those recorded in the movie, so the world in the screen is amplified and enlarged in the real one.

The public, surrounded by those fictitious elements, can navigate through the micro-stories presented by the projections, short scenes of old movies that at the beginning are stopped, darkened, or blurred. Only the sounds produced by the visitors of the installation with their voices or bodies can activate the cinematographic fragments. The pitch, the intensity and the timbre of the sounds produced control the sequences, moving them forwards or backwards, modifying their temporal structure, rendering them visible, or altering their visual aspect.

Once again we find those contrapositions that stimulate a dialogical relation between work and audience: reality/fiction, time/space, image/sound, art/game, reinforcing and fading at the same time the distance between what we actually live and what we could live.

Miguel Álvarez-Fernández  understands the research with new media as a way to explore realities through collaborative projects, as open and shared as possible. He is a professional amateur himself, with a taste for impure forms of art and media while remaining committed to the most substantial aspects of the piece, and thus reaching the nucleus of each idea by preserving the conceptuality of the work from the risk of a technical and technological redundancy.