Kunsthalle Wien is thrilled to announce Andrea Büttner’s first solo exhibition in Austria. Known for her acute, poetic and confrontational observations of our world—past and present—Büttner draws on philosophy, art history and contemporary conditions to establish thoughtful links between social or ethical issues and artistic practice.

Andrea Büttner’s work is often presented in specific arrangements that she herself has conceived and Beggars and iPhones is no exception. Using the Kunsthalle’s glass façade which functions as an open door to the urban landscape, Büttner explores the permeation—or reversal—of customary ideas of the interior and exterior, of the perceivable and invisible. Materials accumulated and discarded during the preparation of the exhibition will be displayed outside, while inside, her two- and three-dimensional works will be presented within a classic “cube” space.

“Beggars” is the title Andrea Büttner chose for a series of large-scale woodcuts depicting emblematically reduced views of shrouded figures with downward pointing hands. The duality expressed in gestures of pleading—outstretched hands, shame, concealment—is encapsulated through variations on a simple pictorial formula. Developed from the artist’s ongoing examination of the iconography of poverty throughout visual art, these works speak more broadly to the relationship between public and private, between what is communicated to the external world and inner feelings experienced by the individual. 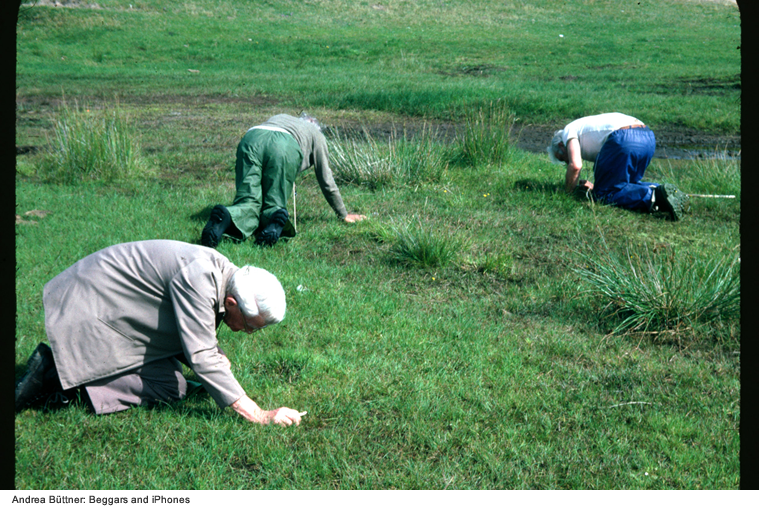 Büttner’s curiosity for the artistic, philosophical, and socio-cultural dimensions of the transitional realm between interior and exterior extends to her series “iPhone etchings.” The manual swiping across the screens of our mobile phones, an individual, albeit very common “gesture,” usually remains invisible as an “expression.” Using a hybrid of old and new technologies, Büttner has greatly enlarged the personal traces her fingers left on her smartphone during various web searches and transferred these to the medium of color etching. Created not only by manual and analogue methods, but also with digital means, these pictures are reminiscent of informal and “gestural” painting.

In addition to the woodcuts and etchings, Büttner will also show reverse glass paintings, photo collages, a 3D slide screening about moss collecting, and dried moss beds. Moss, which usually grows on the ground in the shadow of other plants, is classified as a “lower plant” by botanists, and is of little economic value.

Büttner highlights the latent potential of the plant and of a “culture” that needs nourishment, drawing associations not only with the inherent beauty of nature but with the perpetual dichotomy of high and low. Andrea Büttner’s spatial assemblages, which at first sight seem commonplace, challenge a plethora of certainties and give rise to just as many questions. The position the artwork occupies between the intimate practice of its production and the public practice of its presentation is only one of them. 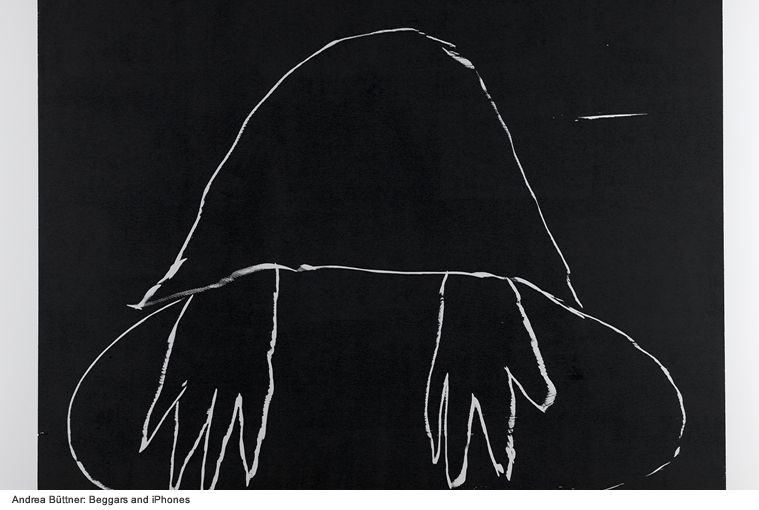 Andrea Büttner was born in Stuttgart in 1972, and lives and works in London and Frankfurt am Main. Since 2007 she has realized numerous international solo exhibitions at venues including Whitechapel Gallery, London (2011); Museum für Moderne Kunst, Frankfurt am Main (2013); Museum Ludwig, Cologne and Tate Britain, London (2014); Walker Art Center, Minneapolis, USA (2015); and Staatsgalerie Stuttgart (2016). She participated in the 29th São Paulo Biennale (2010) and documenta 13, Kassel (2012). In 2015 her work appeared in the exhibition Individual Stories. Collecting as Portrait and Methodology at Kunsthalle Wien.