What if contemporary digital media plays a crucial role in the return to a pre-Gutenberg era? This theory, initially formulated by Professor L. O. Sauerberg of the University of Southern Denmark, suggests that modern digital devices are leading us down a path that will free us of traditional print-based media such as books, letters and pages. Looking at the works of Marseille-based artist Paul Destieu, I couldn’t help but think about this theory. Destieu’s research questions the evo­lution of media and their situation in our contem­porary envi­ronment. He explored a wide range of media, looking for new forms of expression through sound, ins­tal­lations, digital prac­tices and archi­tecture. His work grasps ten­sions between the emer­gence and disappearance of tools from dif­ferent times, exploring the border between emer­gence and col­lapsing of a system.

Filippo Lorenzin: Since 2007, your practice led you to work with a wide range of media, from installation to video projections. How do you approach a new project?

Paul Destieu: Part of my works is based on media experimentation wherein I create more or less discrete shifts between sources, media and techniques. From the time I started, I have been using different analog machines and digital devices, code and other traditional techniques. Through my different projects, I try to understand their specificities, their limits, also the political dimensions they convey and the aesthetic they produce. In this sense, my practice is fed by subjective observations over the evolution of technologies. My works are mostly often the result of confrontations between language forms, tools and time. 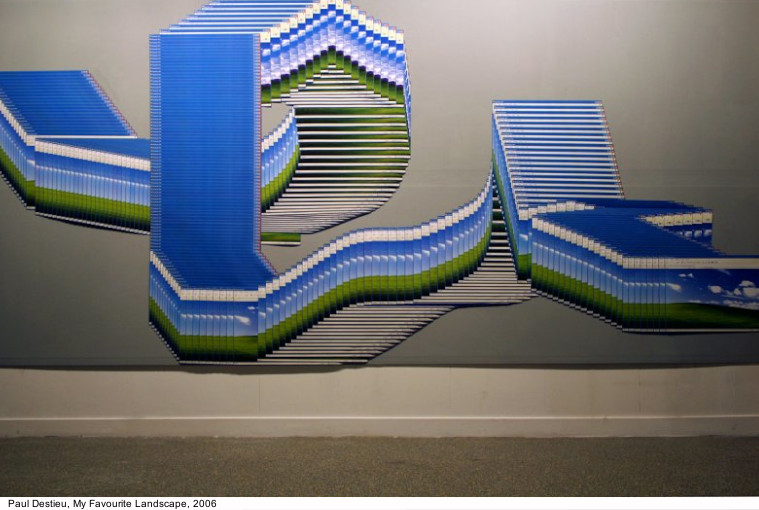 Filippo Lorenzin:My Favourite Landscape (2007) may be called a post-internet work ante litteram. How did it came to be?

Paul Destieu: In the mid 2000s, the Windows picture Bliss and its “expressionist” dimension kept on puzzling me every time I would start my computer. I am not sure if it was about the over saturation of colors whether if it was the ironical perspective of a “natural” landscape as the background of a computer screen, but I became intrigued by the aesthetic and this setting as a whole. I started to experiment with the weakness of the system and its resource. The outcome of this process was the printing of the picture Bliss, back on paper, in order to physically reproduce the erratic behaviour of the machine as one of my favorite landscape. This digital glitch of nature and its manual reproduction, was to me, an emblematic form of the implementation of corporate digital culture and the shaping of our condition.

Filippo Lorenzin: Was it then when you started focusing on the hybrid nature of digital materials?

Paul Destieu: From then on, I have been trying to get over the narrative of “virtual” in digital culture, interested in possible materialization including its dystopic side and its darker effects on our environment. It is the case of the project Option de stockage (2017), which I initiated few years earlier with my friend – artist and carpenter – Colson Wood. This collaboration deals with the architectural impacts of neo-liberalism and trading system on our world – as it happened in 2007 with the mortgage crisis. 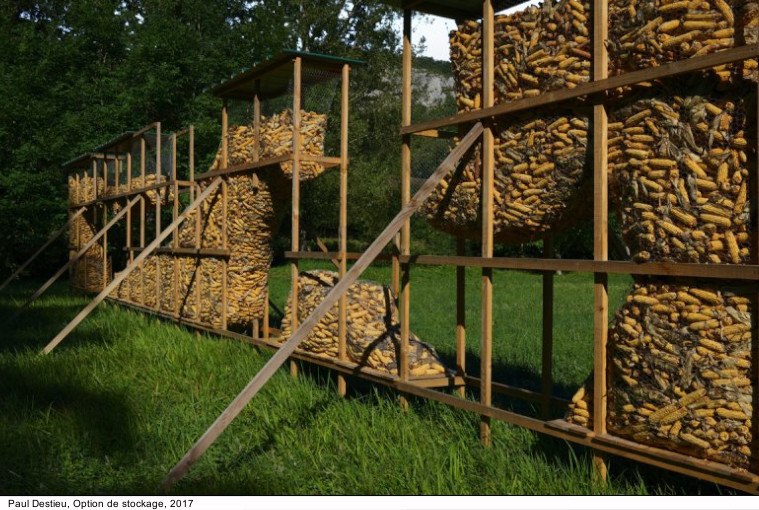 Filippo Lorenzin: Can you tell more about your collaboration with Colson Wood?

Paul Destieu: We’ve been working together on kind of “ready-ruins” produced by the failure of the economic system we live in. Our first architectural collaboration, untitled Subprime was realized in Marseille in 2011. This project was based on a technical challenge at a structural level, with the construction of a house-property materialized in space by its gutter pipe structure. In 2017, for the art event Co-mutations, in the Lot valley, we presented a modified local corn silage structure, taking the term “stock option” as an architecture protocol for the reshaping of this obsolete equipment.

Filippo Lorenzin: I would like to learn more about your inspirations. For example, Révolutions (2012), an installation with a projector showing a loading circle on loop, reminds me the enigmatic mood of Marcel Duchamp‘s Anémic Cinéma (1926).

Paul Destieu: It is a funny connection. Yes, there is quite a bit of derision in Révolutions too. What I particularly appreciate about Anemic cinema is that yet, it rose the question of cinema as a dominating form of entertainment, with a kind of hypnotic satire. It’s probably connected with the wish to free the moving image from the obligation of narration and the need of looking for other format. In Revolutions, I was interested in interlacing the temporality of two different media. I tried to experience at once the technical characteristic of an obsolete analog films through a super 8 loop, while projecting its current digital version as a loading circle. The filiation link between different technical ages and transformations/recurrences of the forms over tools and time questions the way we look at our surrounding and the hierarchy of our perception. 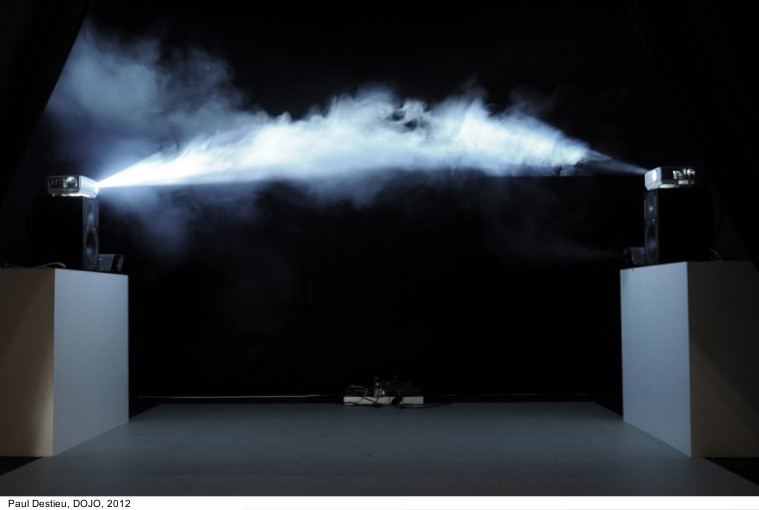 Filippo Lorenzin: Looking at your portfolio, I gather you have a strong interest in remakes and postproduction.

Paul Destieu: I have an appeal for remakes and sub genres. It led me to develop projects like DOJO (2011) for instance, which was realized in collaboration with Julien Toulze. The installation is based on the hacking of the Star Wars collection screening, with a never-ending beam fight of two synchronized video projectors fed by the same audio visual sources. The screening turns into a space dedicated to the rhetoric of fight embodied by a light and sound battle – somewhere between works such as La dialectique peut-elle casser des briques? (1973) by René Vienet and practice such as Bookfighting (2014) by Yves Duranthon.

Filippo Lorenzin: The concept of friction between two or more agents is central in your works.

Paul Destieu: I’ve been working on this kind of technological embodiment in earlier projects such as Nadal (2010) for instance – wherein several tennis training robots are configured to play autonomously against each other. This type of protocol can seems binary but to me it’s also a self-reflexive experience in the sense that it turns our traditional connections with machines into a contemplative approach as it switches our way to portray notions of production and performance. 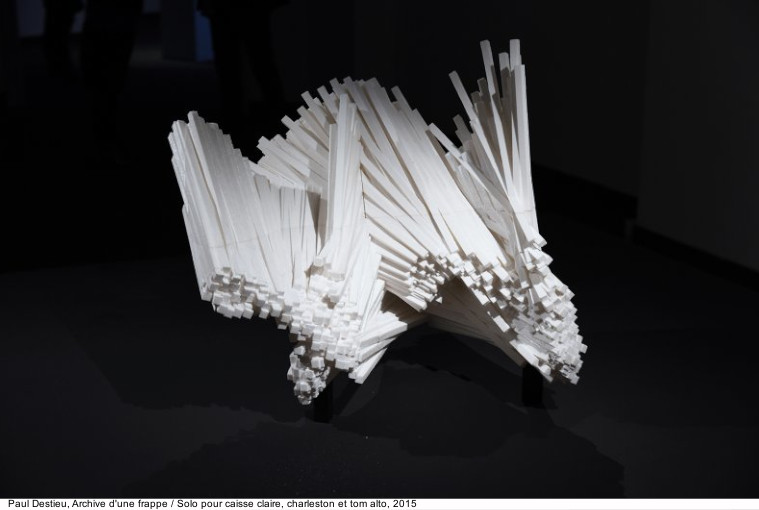 Filippo Lorenzin: The Archive d’une frappe (2015-) series explores new ways to experience sound with sculptures and 3D renderings visualizing the movement of sound waves in the air; looking at them, I couldn’t help but think about some Land Art projects wherein the physical environmental changes are underlined by the artists.

Paul Destieu: The project is not so much about how sound affects its environment, but it is rather a study of a drum rhythm thanks to the moves it required, the potential of gestures for musical score. I could related it more formally to the pre-modern history with chronophotographie or perhaps futurism. For this project I collaborated with my friend Damien Ravnich at the Lab GAMERZ in Aix-en-Provence. He is the formal drummer of the project Postcoïtum which I am fan of. I used an electromagnetic motion capture to record his drumsticks positions 24 times per seconds. To make it short, I have been able to import all of the recorded X, Y, Z coordinates as a printable 3d model. Basically, this collection of models is what remains from his rhythmic compositions once sound is gone.

Filippo Lorenzin: How do you describe the act of recording this?

Paul Destieu: This drum recording session and its post-production process was a quite odd experience as the archiving material wasn’t based on sound but on gesture only. What’s interesting about this procedure is the series of conversions that it required, as the ability to carry and express musical intentions regardless of the different states of the information.

Filippo Lorenzin: I already mentioned one of your earliest works, Favourite Landscape, can be considered a piece of post-internet art, blending digital aesthetics with IRL materials. Post-internet art was a very specific art genre so I wonder if you ever felt part of it and what you think of new artists working on the thin line between digital and IRL.

Paul Destieu: I don’t consider my work in general as post-internet. I think that internet has changed considerably over the last decade and I feel some kind of standardization in the forms which have emerged along with this term. What confuses me about this label is that it refers to the global adoption of internet as the main time marker, which I find too restrictive and not enough critical speaking about our current condition of web users. I’ve been perhaps more influenced by earlier net art approaches such as Vuk Ćosić, wherein I found a greater subjectivity and a deeper perspective appropriation of network and languages.

Paul Destieu: In my latest projects, I have been trying to set a distance with digital cultures working with more ancient network signals such as the steeple of a church. I’ve been working on the imprecision of time measurement and the reactivation of obsolete clocks. It is the case for the sound installation Midi dix-​​huit, contre-​​clocher which I site-specifically realized in 2017, in the village of Saint Cirq Lapopie. For this project, I turned my studio into an alternative steeple in order to hack the original daily angelus, producing a public situation and a distorted stereophonic experience in the village and its surroundings. This kind of reactivated protocol deals with a need for the re appropriation of our reality at a local level, beyond the globalization of the infrastructures and the domination of the information age on our behaviors.