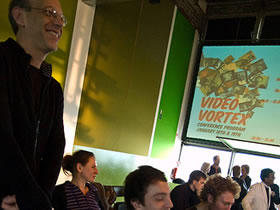 During the latest Video Vortex meeting organized by the Institute for Network Culture in Amsterdam at Club 11, the large networker’s community met to analyze how video and other materials are shared through the net. In substance the questions that were addressed were how video and audiovisual information is used and shared through the net, how platforms like Vlog and podcast are developing and what tomorrow’s television will look like in terms of clustering of information and free construction of programs with independent content.

Participation, sustainability and new interaction strategies between artists, produces and public have been central topics of discussion. Piracy was often at the margins of the conference, and sometimes it emerged and got someone intrigued. I was one of those, and I decided to interview Geert Lovink, curator of the event and author of Zero Comments, published in Italy by Mondadori, in order to give more space to the topic of P2P networks’ production and organization. For years now Geert Lovink has been one of the major analysts of that arena where Internet meets the economy, politics, social action, art. His prolific activity as a writer and as organizer of international meetings had made him one of the main promoters of innovative net culture and of net.art. Already in 1995 he created www.nettime.org mailing list, which is now recognized as one of the main discussion forums of the net and of its capabilities. Co-founder of Adilkno [Foundation for the Advancement of Illegal Knowledge], editor of Mediamatic magazine between 1989 and 1994, organizer and soul of Digital City of Amsterdam project, founder of the Institute for Network Cultures, Geert Lovnik is hard to pin down as a classic intellectual figure, as he effortlessly moves between academia and the countercultural scene: he’s on the borders of both, but certainly not on the margins of either.

He is author of seminal texts such as Dark Fiber (2002), Uncanny Networks (2002), My First Recession (2003) e The Principle of Notworking (2005). Lately Lovnik’s activity has focused on creative practices and on sharing patterns on the net and through the net. On the one hand he has thus published texts and articles that deal with new creative practices, which were born and developed through Internet with low costs and high visibility, on the other hand the Dutch intellectual has focused on the phenomenon of Web 2.0, on practices of content sharing and their organization on the net, on the ever increasing creative and professional networking activities. We met Geert Lovnik at the Dutch Video Vortex meeting, and we jumped on the opportunity to have a chat with him.

Maresa Lippolis: You’ve been studying networks and how people collaborate into networks, how do you describe, in your analysis, p2p, their communities, and the new production of sense they are developing?

Geert Lovink: We need to make a distinction between the official P2P ideology, in which I also participate, and the dirty reality. There is a multitude of reasons why people participate in P2P networks. Also politically there is a interesting range of people involved in P2P, from the post-modern poor, driven by a lack of cash to techno-anarchists to capitalist pro-market libertarians. In that sense P2P is deeply human. It’s like sex. There is so many ways of doing it, and the reasons and intensions are so different, each time, even within one person. I am not saying the situation is complex. I do not mind to explain, and defend, the idealistic version of exchange, anti-copyright, sharing and so on. The fuzzy everyday use of P2P exchange networks is largely happening outside of any discourse. I see P2P networks as a temporary autonomous zones, as described by Hakim Bey, as they are bound to disappear (in order to reappear elsewhere). I do not think it is useful to argue that they should be legalized.

Maybe this is because I am from Amsterdam where we have made a lot of interesting experiments with phenomena that happen in the grey zone between legality and illegal practices. We have often seen that half-way tolerating illegal activities is generating interesting situations. Elias Canetti’s descriptions of how crowds gather and fall apart might help in this context. Complete legalization often kills the activity and neutralizes the problematic field up to the point of disappearance. Legalization of exchange of copyrighted material is not the way to go. What we instead need is an alternative economy, one in which artists and creative producers are financially rewarded directly, without ‘middle men’, for instance through micro-payments.

Maresa Lippolis: In your essay The Principle of Notworking (2005) you say that propaganda is not as effective in networks than in other media. Do you still think that’s true, even considering the extend web 2.0 is growing? Is it possible that p2p could be a good instrument to empower people and develop new channels to distribute sense?

Geert Lovink: You are right that we witness an unprecedented ‘massification’ of web platforms with up to 100 million users of a single website. Average social networking sites have somewhere between 1-5 million users. However, they are not online all the time. At any given moment in time there are around 40.000 people inside Second Life. These numbers might grow and look different at peak times.

Still, they are not grouped together. I believe that we have left behind the television age where we sit around the fire together, as Marshall McLuhan once described it. With the exception of moments like the Olympic Games the Long Tail is bound to get longer. We will have to get used to this and reconfigure our understanding of what power consists of in the distributed age. Power as such does not disappear, neither does propaganda. What diminishes is the spectacular, celebratory aspect of it. The trend of indirect, invisible ideology further continues. It will become really difficult to detect present forms of subliminal indoctrination.

There is a still a great desire for consumer capitalism, in particular when it is glamorous and wild. P2P networks are not a serious counter force in this game. The fact that one collaborates and exchanges doesn’t make you a Gutmensch, let alone a revolutionary. For me it is not enough to ask the question of empowerment. For what? It’s the same with this abstract (but appealing) demand for ‘change’? Change in what direction?

Maresa Lippolis: During Video Vortex 2 in Amsterdam Florian Schneider focused his speech on the idea of imaginary property. He said that in the digital age property shifts from the Marxist concept of fetishism towards the idea of social relations. To own an image or a medium means to define social relations and a network. Do you think this can also be applied to P2P communities? How could use value and exchange value being rediscussed in this case?

Geert Lovink: I am not on top of the P2P debate about value. If you follow interesting forums like iDC on this you would see that Michel Bauwens, Franz Nahrada and Adam Arvidsson have a lot of interesting insights. Five years ago it was a German list community called Oeknonux that discussed these issues. Oekonux as a project got really far into the debate but then stalled because the founder and moderator, Stefan Merten, wasn’t able to let go of the project and so the context dried up. I can only make some meta observations.

Ever since Baudrillard and others of the 1960s generation we have seen a further acceleration of the whirlpool of concepts that were once developed in the time of Smith, Ricardo and Marx. The political economy during the late 20th century has not developed a convincing critical vocabulary of its own, so we’re still in the midst of the debates around the different definitions of value, use value, exchange value, surplus value, price, wealth, and so. If we discuss the economy of free software/open source and peer2peer networks it makes more sense, as Arvidsson and others suggest, to investigate ‘accumulated affect’ and ‘sociality’ that result in an economy based on ‘ethical value’ (driven by brands). I can see this point and do believe that it contributes to a more equal and sustainable society. It will also mean more media madness, not less.

What I would contribute to the debate (I am not an economist) is the ‘free cooperation’ concept from Christoph Spehr. This brilliant essay just came out in an English translation. For me the sociality of the net has to be free in that there has to be a way to opt-out. There should not be a compulsory element. Contributing for no money has to become a free choice, not the default setting.

Geert Lovink: I can see the point of Lessig and his creative commons model. Realistically, it’s something content producers like me can work with. What I do not agree with is the emphasis in the cc rhetoric on the innocent amateur. In my view the amateur is a. not innocent but guilty. There is a pleasure in downloading and sharing illegal material. I wonder if Slavoj Zizek has already written about this. And b. the amateur should at least be given the option of participating in the money economy. If the amateur, who earn money with some other job profession in the day time, feels that he or she want to contribute and share for free, then that’s fine.

At the moment the amateurs are blocking the careers of entire generations of young professionals. With this the rich knowledge of professions is threatened to disappear (for instance those doing investigative journalism). We have to stop this talent drain and not create economies that have to live off charity. Free networks should take themselves more serious. The first step to get there should be to critically investigate the ‘ideology of the free’. New forms of production, as you call it, cost money. We need to circulate money so that it can flow into those circles that have taken up the task to seriously construct tomorrow’s tools.