How much of this is fiction

Showing at FACT (Foundation for Art and Creative Technology) in Liverpool from 2 March until 21 May 2017, the exhibition How much of this is fiction. focuses on politically inspired media art that uses deception in all its forms.

At the heart of the exhibition is the desire to address one of today’s most urgent political issues: the radical shift in the boundary between fiction and reality in public discourse, in a world increasingly governed by “post-truth” politics. How much of this is fiction. shows the artist as “dark jester”, as trickster, using a variety of hoaxes, hacks and ruses to reveal the hidden workings of power structures and the possibility of alternative futures.

As well as acting as a timely reflection on the nature of truth in a time filled with fake news, misinformation, and tactical propaganda, the show also serves a historical purpose. Many of the high-speed media interventions showcased in the show are, to a degree, legacies of ‘Tactical Media’; a cultural and political movement that flourished in the late 90s. Tactical Media was the first to combine the power of art, the practices of PR and advertising worlds, and an experimental approach to digital media, to mount hit-and-run interventions in the media sphere aiming to create chaos as a means of generating political opportunity. 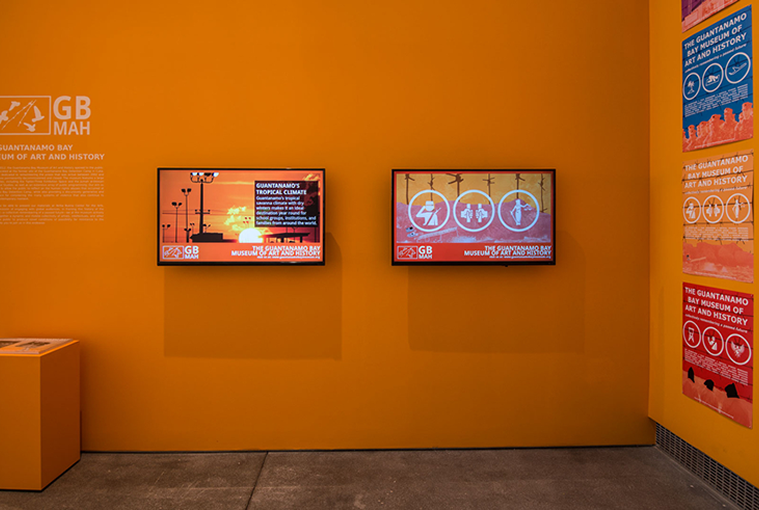 The exhibition is organised into two principal areas, Zone 1: The Newsroom and Zone 2: Guantanamo Bay Museum for Art and History.

The Newsroom looks into hacks and fabricated ‘news fictions’ where deception or provocation has interfered with the media landscape, and opened it up as a platform for discussion and debate. Famous examples include American media pranksters The Yes Men’s impersonation of a Dow Chemical representative apologising for the Bhopal Catastrophe on its 20th anniversary live on BBC World News, and UBERMORGEN.COM’s large-scale action of “media hacking” during the Bush vs. Gore US presidential elections in 2000, where they adopted and revamped the domain name voteauction.com into a website where American voters had the opportunity to sell their vote to the highest bidder. Showcasing a collection of interconnected works, this zone demonstrates how these tactics are grounded in a long history of politicised hoaxes and hacks, eventually morphing into contemporary, web-based activism.

For the second part of the exhibition, the curators invited artist and chief-curator Ian Alan Paul of the Guantanamo Bay Museum of Art and History (GBMAH) to co-curate and present a series of interconnected installations revealing how the trickster ethos is used to address a number of urgent related themes and issues. Works range from the subversive redefinition of spaces and architectures of containment by Wachter & Jud, to digital acts of cultural reclamation from Morehshin Allahyari; a reimagining of the roles of drones in the near future by design studio Superflux; and the latest satirical campaign of The Yes Men. 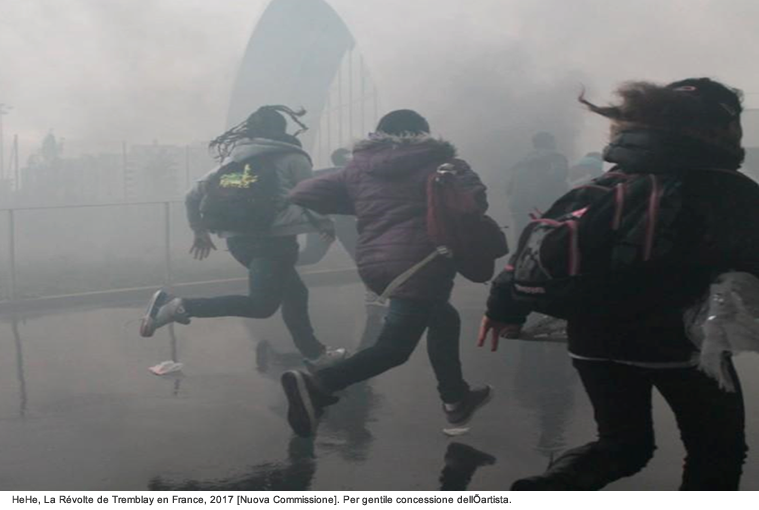 Contextualised by an opening symposium, a public programme of talks, live performances, exhibition tours, and film screenings will run alongside How much of this is fiction. It will explore various aspects of the exhibition, including the roles and risks of hoaxes, and highlight the urgent need to develop a more “populist language” for progressive politics.

FACTLab, FACT’s experimental space for collaborative learning and practice-based research, will host a series of informal “art and knowledge” workshops with some of the artists in the exhibition focusing on rapid prototyping, internet literacy, and the deployment of maker and coding skills in the service of online and offline activism. There will also be public family workshops every other Saturday throughout the exhibition in the FACT foyer.

The title of the exhibition How much of this is fiction. is a reference to a work by Swiss artist Maia Gusberti. Originally created in 2014, this white neon sign poses what seems like a question, but as a statement. The artwork’s context is carefully selected to reflect tensions in that which we believe to be true, and that which we ‘know’ to be a fiction. This quizzical statement sets the tone for the exhibition – how much of what you are seeing is fabricated, embellished, or a complete hoax, and how are these half-truths used to reflect the state of our contemporary collective imagination.

FACT is the UK’s leading media arts centre, focused on bringing people, art and technology together. Based in Liverpool, FACT’s award-winning building houses three galleries, a café, bar and four cinema screens. Since the organisation was founded in 1988 (previously called Moviola), it has commissioned and presented over 350 new media and digital artworks from artists including Pipilotti Rist, Nam June Paik, Krzysztof Wodiczko, Ryoichi Kurokawa, Apichatpong Weerasethakul and Isaac Julien.

Framer Framed is an Amsterdam-based platform and exhibition space for contemporary art, visual culture and critical theory & practice. Throughout the year, the organization presents exhibitions in collaboration with varying international curators and artists. Next to the exhibitions, an extensive public program is organized to contextualize the topics concerned. With this common space for dialogue, Framer Framed aims to show a plurality of voices in a globalized society.

HeK (House of Electronic Arts) (CH) is dedicated to digital culture and investigating new art forms, technologies and design in the information age. This is embedded in a creative and critical discourse on the aesthetic, socio-political and economic impact of media technologies. Promoting information technology as an artistic medium, HeK explores the issues of contemporary art in the 21st century. 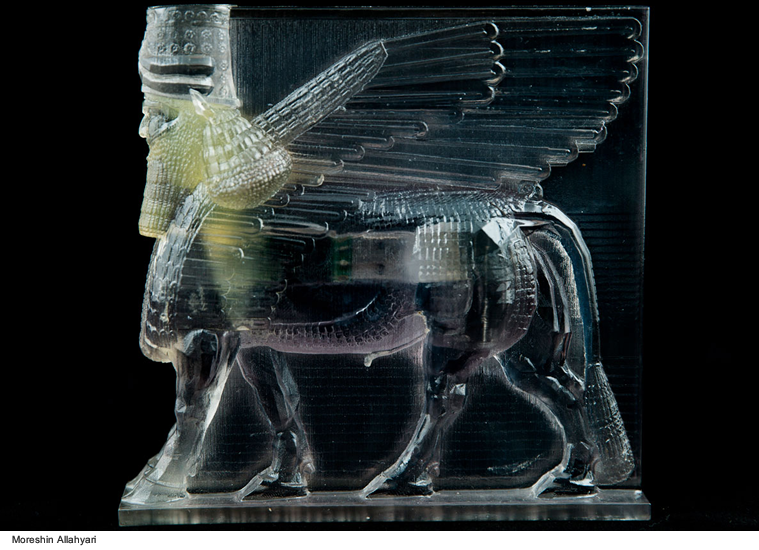 Annet Dekker (NL) is an independent researcher and curator. She is currently Assistant Professor of Media Studies: Archival Science at the University of Amsterdam and Visiting Lecturer at the London South Bank University. Previously, Annet worked as Researcher Digital Preservation at Tate, London, core tutor at Piet Zwart Institute, Rotterdam (Master Media Design and Communication, Networked Media and Lens-Based Media). She was also Programme Manager at Virtueel Platform, Webcurator at SKOR, and Head of Exhibitions, Education and Artists-in-residence at the Netherlands Media Art Institute.

David Garcia (UK) is an artist, academic and organiser. He pioneered new forms of critical engagement with art and media, based on an occupying of the cracks which began to appear in the edifice of broadcast media in the 1990s. Through a series of events, most notably Next 5 Minutes, Garcia (with others) identified these kinds of interventions as part of a wider trend: a previously uncategorised set of cultural and political practices they called, “Tactical Media”. These ideas caught on and have since been recognised as one of the more significant and distinctive cultural movements of the last two decades. To connect the ‘memory’ of Tactical Media to the radical proliferation and transformation of these practices, Garcia co-founded, (with Dutch Media theorist Eric Kluitenberg), the award winning Tactical Media Files, an online repository of Tactical Media materials past and present.

Alongside these projects Garcia has been active in Higher Education in which he has been instrumental in developing and embedding processes that unlock the radical potential of art as research. He has developed these ideas as Professor of Design for Digital Culture University of Portsmouth & Utrecht College of Art in the Netherlands where he launched the (UN) Common Ground project and publication, based around empirically grounded case studies of collaborations in academia, art and industry. He is currently Professor of Digital Arts and Media Activism at Bournemouth University.

About Ian Alan Paul (US)

Ian Alan Paul is a transdisciplinary artist, theorist, and curator. His practice includes the production of experimental documentary, critical fiction, and media art, aiming to produce novel conditions for the exploration of contemporary politics, ethics, and aesthetics in global contexts. His projects have approached a wide variety of topics including the Guantanamo Bay Prison, Fortress Europe, the Zapatista communities, Drone Warfare, the military regime in post-revolution/post-coup Cairo, and most recently with the history and future of Palestine.

Ian is currently part of the faculty at Al-Quds Bard in the West Bank, and has previously taught courses at UC San Diego, the American University in Cairo, the San Francisco Art Institute, and UC Santa Cruz. He has lectured and exhibited internationally, and has had his work featured in The Atlantic, Al Jazeera, Le Monde, Art Threat, Mada Masr, Jadaliyya, Art Info, and C Magazine, among others. He received his PhD in Film and Digital Media Studies from UC Santa Cruz in 2016 and his MFA and MA from the San Francisco Art Institute in 2011.