Anton Vidokle “This is Cosmos”

Death is a mistake. Instead, propounded the Russian philosopher Nikolai Fedorov (1829–1903), mankind should aim for eternal and interplanetary life. As artist Anton Vidokle sums up Fedorov’s position in his Immortality For All: a film trilogy on Russian Cosmism: “Because true social equality means immortality for all […] we must resurrect our ancestors.” And, as a consequence, resurrection of the dead necessitates colonization of space beyond an evermore populated planet Earth.

Russian artist Anton Vidokle’s film trilogy Immortality For All, released between 2014 and 2017, revisits Russian cosmism, and its founding figure, Fedorov, is the first voice Vidokle revives from the past. The philosophy of Fedorov gained ground among a circle of fellow intellectuals in the last 25 years of his life, while he was working as a librarian at Moscow’s first public library housing Moscow’s first public museum, which included paintings, prints, manuscripts and more. 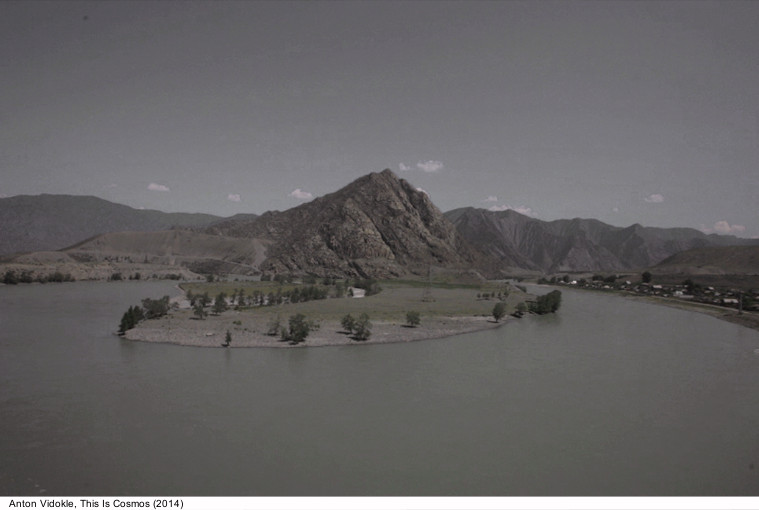 Vidokle’s first solo exhibition in Denmark, This is Cosmos, likewise plays out at a public library housing an art institution, Tranen Space for Contemporary Art. Apart from the video trilogy, the exhibition presents a timeline of Russian cosmism developed in collaboration with Anastasia Gacheva and Arseny Zhilyaev, as well as a small library of Cosmist literature.

Vidokle’s investment in the flow between art space and library echoes Fedorov’s appraisal of the unification of library and museum: “If a repository may be compared to a grave, then reading […] is a kind of exhumation, while an exhibition is […] a resurrection.”

As the timeline attests, Fedorov’s ideas—which are not, as the author Leo Tolstoy put it, “as insane as it seems”—have been hugely influential. Nevertheless, Fedorov almost didn’t publish any of his own writings. Instead, many others, most recently Vidokle and his publishing platform e-flux, have done so posthumously. His legacy lives on in the writings of Dostoevsky, the paintings of Malevich, the films of Tarkovsky, the pioneering rocket science of Tsiolkovsky, maybe even in the construction of Lenin’s Mausoleum, to name just a few examples. 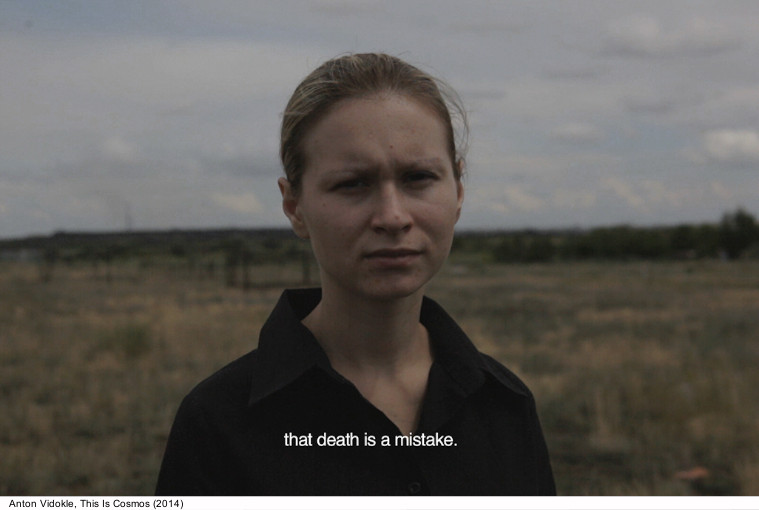 Vidokle’s films, however, are not exactly part of this lineage. They are not the work of a follower, nor the work of a critic. They are rather visual, verbal, and musical variations on cosmist writings at the intersection of documentary, essay, poetry, and reading session. The backdrop to Vidokle’s work might be current private, public, and scientific efforts aimed at realizing cosmist-like ideas about colonizing Mars, resurrecting dead or extinct organisms, reversing aging, transfusing blood and engineering the climate.

The interest of Vidokle’s trilogy is however not a journalistic story about applied cosmism in the 21st century. Instead Vidokle seeks to reignite the speculative and experimental undercurrents in cosmist undertakings and thoughts, which are still at odds with the world and continue to expand and trouble our imagination and worldviews. 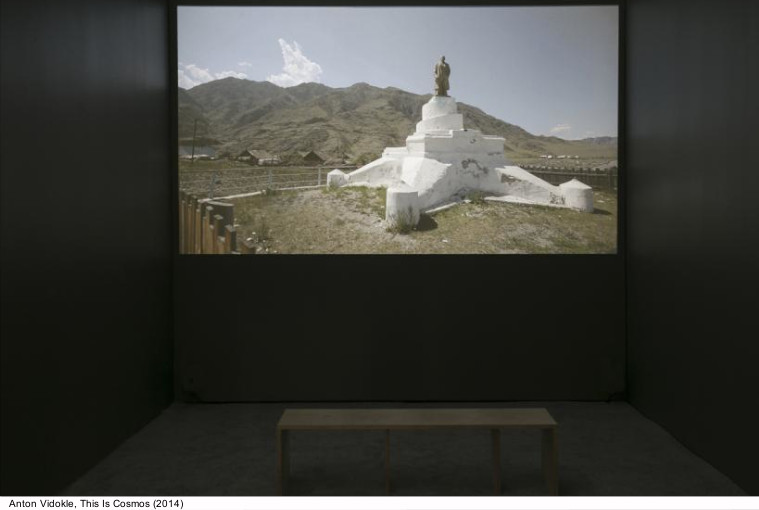 While the films, shot on various locations in Russia and the former Soviet Union, make use of certain codes dear to documentary filmmaking, they do not so much document cosmism and its repercussions on site. Rather, they try to evoke it. All three films do not simply recite and reflect on cosmist thinkers. They also invite people—those who appear in the films as well as those who watch them—to expose themselves to various experiments.

The first film, This is Cosmos, presents itself as “an irradiation session” with “therapeutic effects.” The second film, The Communist Revolution Was Caused By The Sun, includes both a clinical hypnosis script used to quit addictions and a restaging of scientist Chizhevsky’s experiment in the effects of negatively and positively charged air on biological organisms. 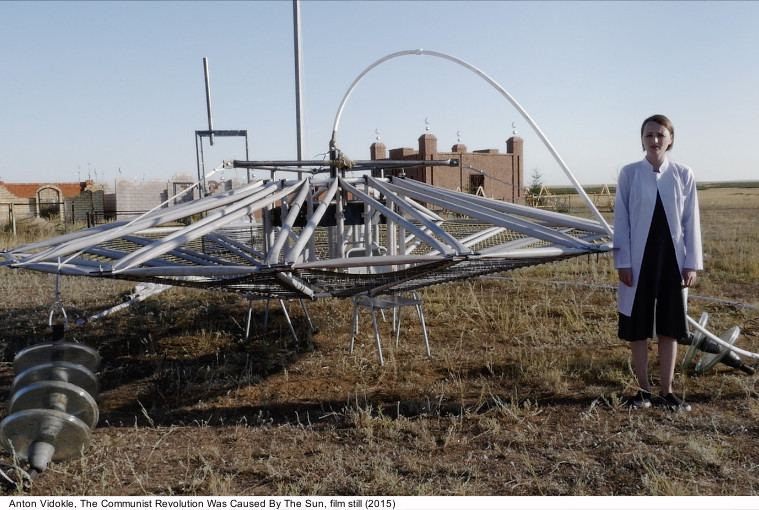 The third film, Immortality and Resurrection for All!, toys with experimental therapy involving a special flicker effect used to treat deterioration of memory. For the occasion of This is Cosmos, Tranen has partnered with the producer Aarnio Originals. In the interior, three monitors float alongside three bubble chairs, leaving visitors and art works suspended in mid-air.

Finnish designer Eero Aarnio’s transparent chairs from 1968 allow visitors to enter an immersive bubble of their own, while displaying the public as participants in a cosmist experience. The exhibition is curated and designed by director Toke Lykkeberg. 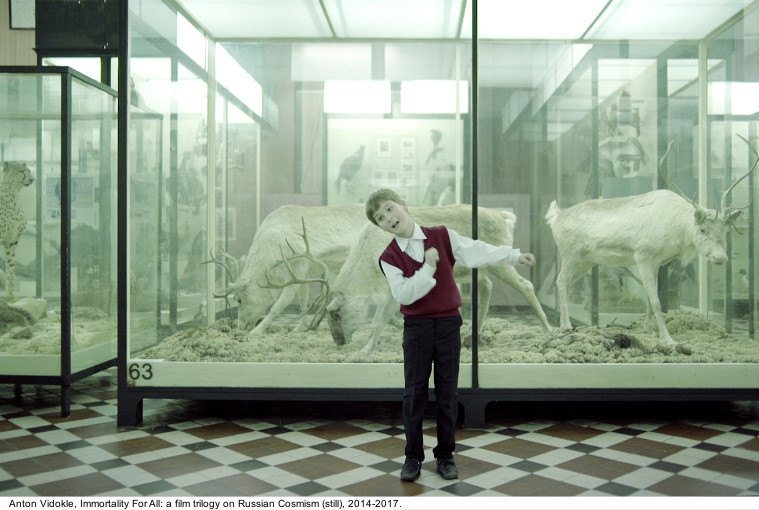 Anton Vidokle (1965, Russia) lives and works in New York and Berlin. He is the founder of the publishing platform e-flux, which has sparked projects such as e-flux video rental, e-flux journal, and an exhibition space in New York. Films from “Immortality For All: a film trilogy on Russian Cosmism” have been shown at numerous museums, such as Centre Pompidou, Paris (2016) and Tate Modern (2017), and various festivals and biennials, including Shanghai Biennale (2014), 65th Berlinale International Film Festival (2015), and the 7th Gwangju Biennale (2016).

This is Cosmos is the third exhibition in Tranen’s current program. Focus is on contemporary art that is not solely focused on our contemporary condition. When everything from climate to technology evolve with ever greater pace, the present becomes ephemeral and intangible. 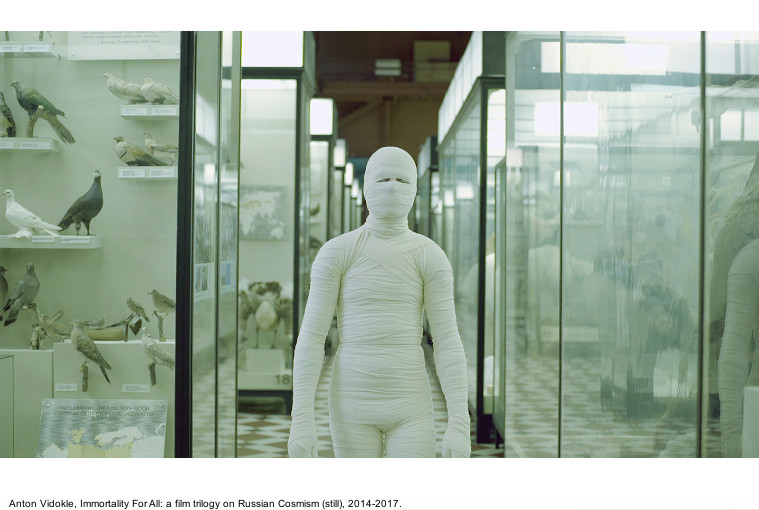 The present starts to shrink and becomes ever harder to grasp. Meanwhile, our knowledge of the past increases. Speculations about the future abound. And, as part of this movement, much art is no longer contemporary, i.e. literally “with time.” Instead, art is rather “extemporary,” i.e. “out of time,” and preoccupied by other and bigger temporalities than the present usually affords.