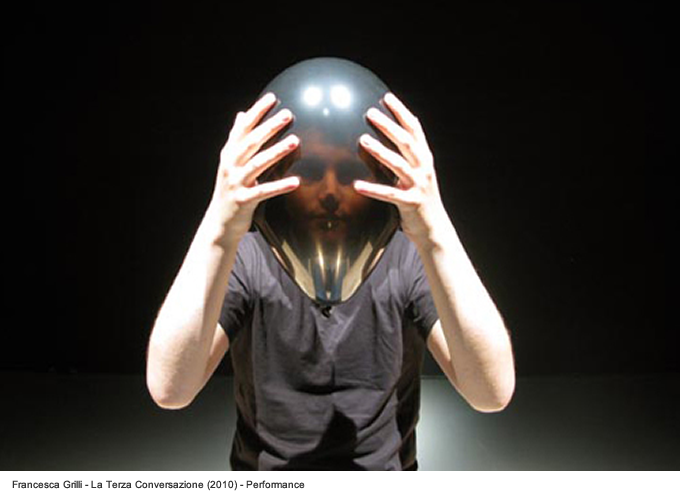 Francesca Grilli, who was born in Bologna and now lives in the Netherlands, has developed her research on the human figure realizing works inspired by her personal memories which are linked to her family and her daily life. Her work recently focused on the obsessive search for the daily miracle, through the manipulation of reality and adding an unexpected variable that produces a sense of familiarity that can also be shocking. As she herself explains, “the daily miracle is a minimal invisible action which often transforms reality into magic, daily actions and tasks into something fabulous.”

The language she has used predominantly in recent years is performance; her performances are accompanied by a profound study of technology that becomes itself part of her work even if it does not create anything new; as in “Moth” where the Rubens tube is used; an albino singer activates it and it turns itself from a simple scientific experiment into something almost esoteric. Technology plays a fundamental role in the series of photographs which compose “effluvia” where, thanks to a special Polaroid camera, Grilli is able to capture the magnetic field given off by people.

The Conversation, the last project she submitted to the Mambo Museum in Bologna and with which she won the new art prize, promotes interaction between art and technology: in it she develops this concept through the use of everyday technology that already exists as an audio system being used in innovative ways. The case is placed horizontally, not vertically, for the performer to detect the vibrations with his feet. She did not make up anything but the performance really is something new. 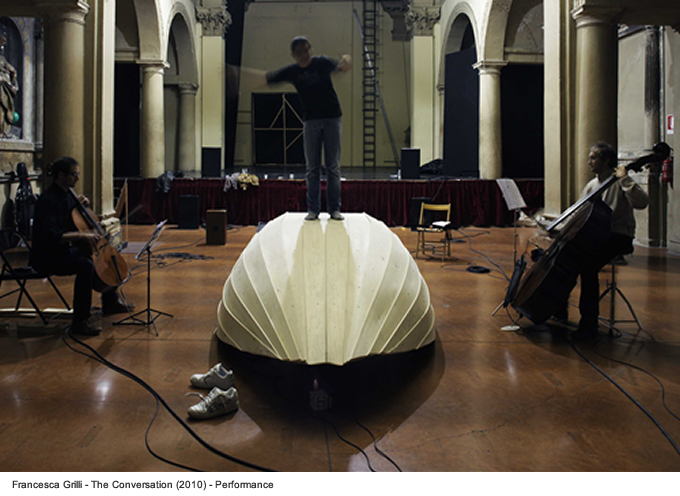 Alessandra Salviotti: Let’s start from the beginning: You started your career as a photographer ,didn’t you? What happened then?

Francesca Grilli: I studied at the ISIA in Urbino a school focused on graphic design and photography and what interested me the most was to develop photograph investigating precisely the aspect of traditional techniques also working a lot manually. Then I moved to Milan, where I attended a more theoretical course which was related to contemporary art; there I started working with an artist, Alessandra Caccia, another photographer. From 2001 to 2004 we worked together, our name was Caccia Grilli, and together we began to explore video. The changeover from photography to video was fairly straightforward. Then in 2006 the International PerformanceTender curated by Fabio Cavallucci was announced and I decided to participate.

Alessandra Salviotti: How did you get to performance?

Francesca Grilli: The shift to performance is linked to a personal fact of my life: a few months before my grandmother passed away and I decided to spend some holidays with my grandfather. During that summer I got into his world, I accompanied him to the dance halls in Emilia he usually frequented. Then together with the prize, I started wishing to realize a performance: Arriverà e ci coglierà di sorpresa was my first performance. This work went well,people were interested in it so, I then realized many other performances.I believe the transition from photography to performance is easy: I re-create moving images, still frames.

Alessandra Salviotti: Many artists working with performance are the protagonists of their performance. You are not.

Francesca Grilli: Paradoxically, I am present in my videos as a physical presence, but not in my performances. Perhaps because these actions derive from images that come to mind or I bump into in my daily life. Because I am fascinated by the life of other people I do not think my physical presence is necessary; having thought and imagined that particular action means I am part of it, the performance becomes a sort of projection onto the others. This does not mean that I am not present; for example in Enduring Midnight , a performance I dedicated to my grandmother , I am present as a simulacrum. The performance was called after an opera; in it an opera singer sings at night: in fact I sing for her. There is another person with some very specific physical particularities that I do not have who represents me. 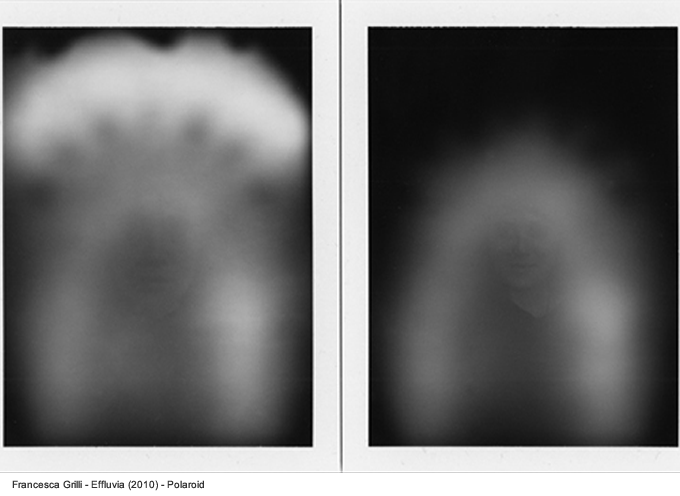 Francesca Grilli: Have you ever noticed scenes in a sense apocalyptic in their banality, or combinations of special characters, or objects and actions that move you so much walking down the street? In my opinion this is the definition of daily miracle: little things that amaze us.Truth at the same time is very important and in fact the only real illusion I’ve ever used in my performances is in “effluvia” where there is a chair that levitates. Had I found a fakir levitating I would have invited him to my performance. The physical effort and skill that the performer has to make in carrying out the action must be relevant and with some risk, although not revealed. Facing risk gives value to the action.

Alessandra Salviotti:Your work with the deaf community began as a “cycle”. What inspired you?

Francesca Grilli: I was inspired by a scene from “Babel” the movie by Alejandro González Iñárritu where a deaf Japanese teenager is in a disco where some techno music is being played very loud. Suddenly the director chooses to turn down the volume of the music in order to show how the same situation is perceived by her. She is also under the influence of drugs and the director shows in her all the cliches of adolescents in a disco, but she does not hear a sound and she lies to everybody because she dances. At one point in the same scene she comes closer to one of the audio boxes and she touches it in order to understand what is really happening; for me this is a moment of great intimacy. So because of this scene I got interested in the music theme and in deafness.

At first I tried to find some deaf musicians, I was interested in people producing sounds without hearing them, but I did not want any sense of pity. Then I met Alfonso Marrazzo, a deaf student of music who directed me to another way of “listening” through vibration. He introduced me to Nicola della Maggiora who then became my performer. He was 14 years old at the time and he embodied all the elements that interested me. From here the trilogy started. 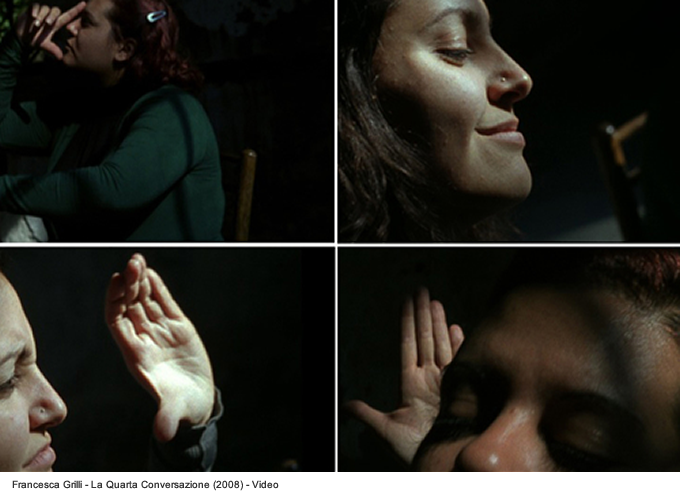 Alessandra Salviotti: What does the trilogy include?

Francesca Grilli: La Terza Conversazione is the first work. In it, Nicola stood on a wooden structure that contained the audio box and he played 7 minutes of techno music in the Italian sign language. The same year I developed a site specific performance for the festival Drodesera, which financed the entire cycle of works, which consisted of a choir of deaf people singing in the woods at dusk. The audience reached the place where the choir was after 20 minutes walking up the mountain; the choir sang quietly.

The following year I shot a film in 16 mm called La Quarta Conversazione in which I invited a group of teachers of deaf children to sing a lullaby. Usually these songs only have a sound aspect because listeners fall asleep; in this case, only the visual aspect is underlined because it is sung with hands. I was interested in the aspect of an impossible communication. The Conversation is the last work of the cycle. It ends it.

Alessandra Salviotti: Regarding The Conversation the installation is magnificent. What do you think about this aspect taking into consideration that you never leave any record of your performances?

Francesca Grilli: This work includes a sculptural part of it which has to stay and live by itself full of the memory of the performance. For me it is a real sculpture. I never present any video documentation as a work; I use it in order to show what happened. On the contrary, the photographs are accompanied by the audio of the performance; they help in understanding the performance. 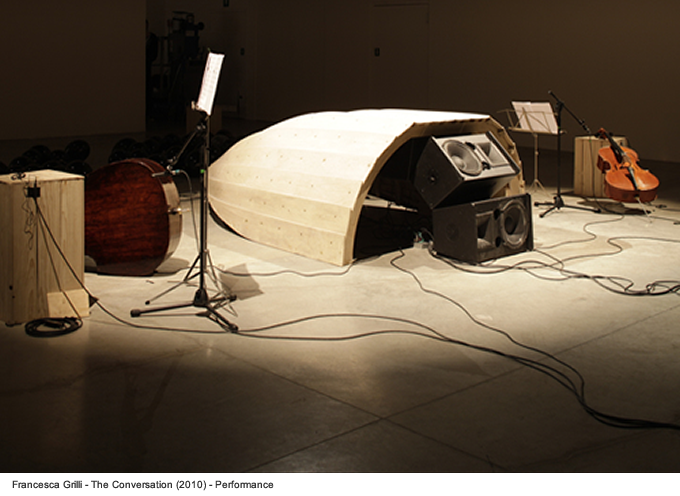 Alessandra Salviotti: What are your references related to art history?

Francesca Grilli: The Pre-Raphaelites and the Romantics, of course Dadaism, but in particular I refer to the film industry. Picnic at Hanging Rock by Peter Weir in 1976, which I saw when I was very small, influenced my whole life; also Maya Deren and her symbolism linked to the ritual, the experiments of mesmerism and the spiritualists of the end of the1800s.