The Power Station of Art (PSA) is delighted to announce the opening of the 13th Shanghai Biennale, Bodies of Water. For the first time, the biennale will unfold as an in crescendo project, launching November 10, with a five-day program titled PHASE 01: A WET-RUN REHEARSAL.

Challenging the usual art biennale format, it will be the first stage of an eight-month extended program that will allow the artists, thinkers and curators contributing to the Biennale to develop their work in close collaboration with the City of Shanghai, its people, networks of activism, organizations, and institutions. Bodies of Water will culminate with the opening of PHASE 03: AN EXHIBITION on April 10, 2021.

The Biennale’s Chief Curator, architect and writer Andrés Jaque, and its curatorial team composed of YOU Mi, Marina Otero Verzier, Lucia Pietroiusti, and Filipa Ramos, are collaborating with the School of Philosophy of Fudan University, the Shanghai Institute of Visual Arts, and the multimedia network DOCU TV to run the five-day performed assembly, where lectures, debates, screenings, and workshops will turn the Power Station of Art into a space for bodily experimentation.  The Biennale is engaging with the history and geography of Shanghai, a long- standing arena for liquid territorial bodies, and the site for the Biennale. The city is intimately connected to the 5,000-meter descent to the East China Sea of Qinghai-Tibet Plateau’s meltwaters, located at the intersection of the Huangpu and the Yangtze Rivers, and in the vicinity of the human-made Jing-Hang Grand Canal. 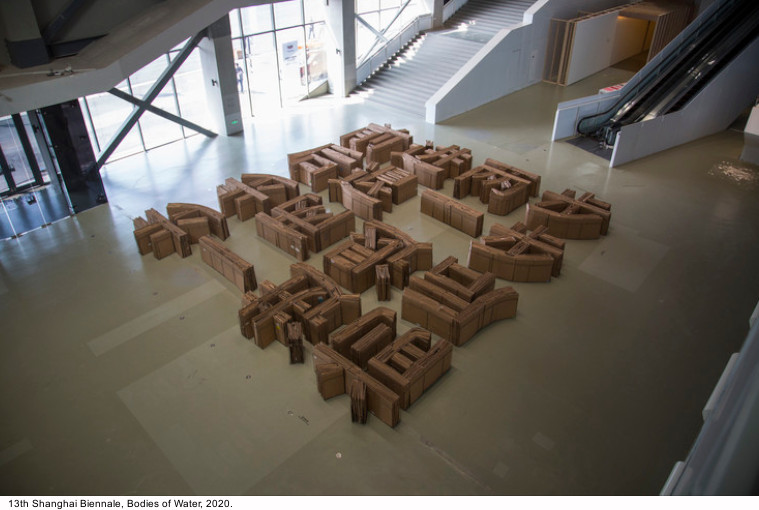 Particles dragged from up to 6,300 kilometres of sediment are metabolized by edible plants at the Yangtze Delta, China’s most fertile agricultural site. Mineral and organic matter, travelling suspended as part of bodies of water, is then rebodied. Not without struggle, the flow of water reconstructs geographies and vitalizes organisms.

The Shanghai Biennale, the oldest art biennale in China, will ultimately interrogate its own situation at PSA, a former coal-electric plant that fuelled the industrialization of the Huangpu River, a cauldron of accelerated production and bodily mobilization. This edition will nurture art as an ecosystem of practices closely connected to different forms of human and non-human knowledge, sense, and intelligence. In close collaboration with Shanghai’s universities and networks of independent art spaces and activism, the Biennale will build on art’s interdependency with science, social constructs, technology, and modes of spirituality. Rather than presenting art as autonomous, the biennale will provide a platform to acknowledge the diversity in which research and knowledge making happens and is disseminated.

THE PHASES: IN CRESCENDO BIENNALE

For the first time, the Shanghai Biennale will operate as an eight-month “in crescendo” project, unfolding in three phases:

PHASE 01: A WET-RUN REHEARSAL. November 10–14, 2020. A summit bringing together contributors to present their work in the form of a performative assembly taking place in the PSA’s Grand Hall and spreading out to networks of art spaces along the Yangtze River.

PHASE 02: AN ECOSYSTEM OF ALLIANCES. November 15, 2020 – April 9, 2021. Keeping a permanent post at the PSA, the “in crescendo” project associates itself with infrastructures where online/offline social and communal life are taking place. These include streaming TV channels, social media, university programs, and serial interventions on urban dynamics.

PHASE 03: AN EXHIBITION. April 10 – June 27, 2021. Opening with a festival, the Biennale will unfold into an exhibition that will run through PSA and expand into a series of locations along the Huangpu River and across the city of Shanghai.