The Eco-Media of YOHA: power, art and media in a globalized world 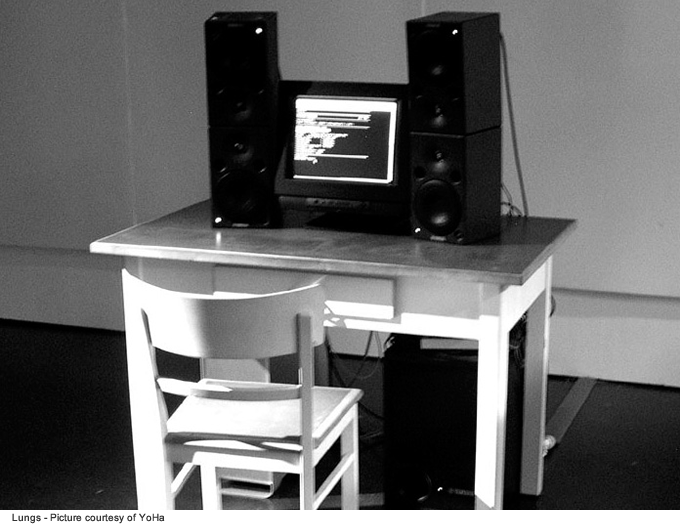 YoHa is Graham Harwood and Matsuko Yokokoji. Formerly part of the seminal media art collective Mongrel (http://www.mongrel.org.uk/ ), since 2008 Graham and Matsuko have conducted a fructuous artistic exploration at the intersection of power and media, and their effects globalized economies.

YoHa has produced, among other projects, a series of works investigating the social and human consequences of the exploitation of materials used in manufacturing computing and telecommunications technologies like coal, aluminum and tantalum. Tantalum Memorial (2008, togheter with the other member of the group Richard Wright, http://yoha.co.uk/tantalum) is a series of telephony-based memorials to the more than 4 million people who have perished in the infamous “Coltan Wars” (Coltan ore is mined for the metal tantalum, widely used for mobile phones fabrication) in Congo since 1998.

Moreover, Coal Fired Computers (2010, http://yoha.co.uk/cfc) is a massive steam-engine powered computer crawling the internet searching for data on coal-related deaths: every time a database record of miners’ lung disease is shown on the computer monitors, a lung prop inhales exhaust fumes from the coal combustion, visually registering the extent of pollution and decay induced in living matter through coal’s use as a source of energy.

Other works of YoHa address more specifically questions of “openness” when it comes to the public sector. Invisible Airs (2011, http://yoha.co.uk/invisible), described as an “investigation of Power, Governance and Data”, is an attempt to render tangible and accessible the expenditure database of the Bristol City Council. The project consists of various interactive pneumatic contraptions: “expenditure filled spud gun”, “Open data book stabbing”, “Pneumatic Brusher” and “Public expenditure riding machine”. 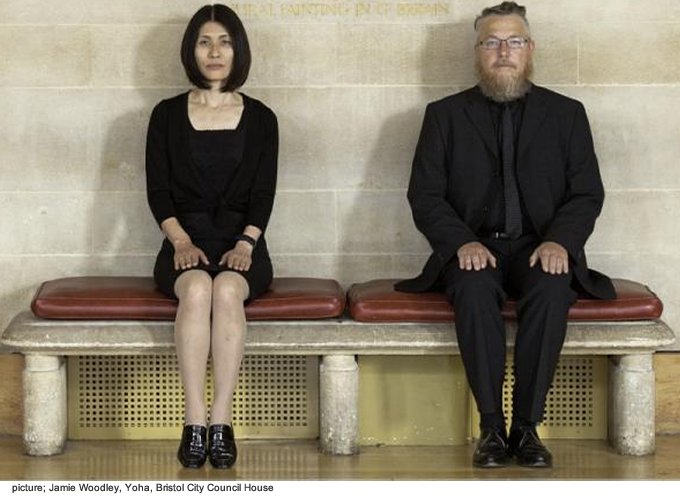 Looking at their artistic body of works and their deep artivist attituted, I have decided to contact Graham and Matsuko in order to have an interview with them…

Mattia Casalegno: Your work engages activist and political discourse. How important to your work is the context of art? Do you think it’s important to describe yourselves as artists?

YoHa: It largely depends on who you are talking to and in what situation. If the process of the work involves acquiring a second world war Database of forced labour from the “Deutschen Waffen und Munitionsfabriken A.G.” as in Lungs (2005, http://yoha.co.uk/lungs ), then that negotiation would reflect the current conditions of the artwork and the art could be seen as the negotiation of how the Deutschen Waffen can avoid too much liability for the data and how much pseudo anonymity YoHa can accept. The art at that moment is the space of negotiation – later it might be something else…

In Invisible Airs the process of asking to see the database table layout of Bristol City Council and its permissions structure was a way of interrogating how ‘openness’ was created, constructed and what meanings were ascribed it, in the context of UK public expenditure.

We like to think about our Art as inquiry, where we imagine the affect of looking, the gaze, reveals, opens up, changes in some way the thing you observe. Coal Fired Computers allows those who man the installation, its miners, its steam engine fed on coal, its computer and attached lungs and the audience, to explore through a physical diagram the shifts of lung disease and coal production across the world since the UK’s 1984-85 miners strike. The politics is here but it is the understanding of technologies of power, electrical, fossil fuel, microbial or mineral.

Art galleries, museums and festivals can be useful to such an enquiry when you wish to present a proposition, assemblage, physical diagram of a set of relations in which a reflective, middle class environment is useful. For YoHa art spaces are useful to reflect on such practices, methods, projects but are not particularly useful for when our enquiries turn to live media systems in a municipal practice: Invisible Airs for instance, or Telephone Networks. Then we need to create other methods of working. 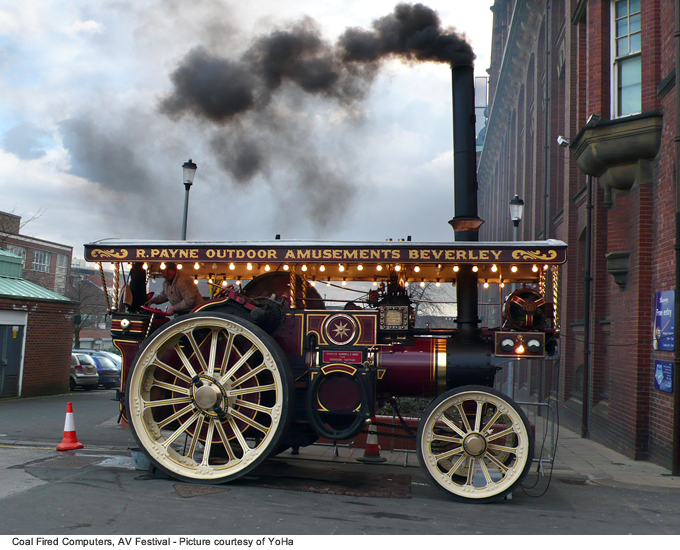 Mattia Casalegno: Describing the genesis of Invisible Airs you said that, after you started working with the huge and cryptic dataset of the expenditure database of Bristol City Council, you came to the conclusion that “power reveals itself through boredom”.  Reading this reminded me about something Villem Flusser in “The Shape of Things” when he said: “The new human being is not a man of action anymore but a player: homo ludens as opposed to homo faber. (…) It is no longer a question of action but of sensation”. People do not wish to do or to have anymore, but to experience. Is access to data becoming less important than the design of the experience, involvement, degree of pleasure that users have with such data?

YoHa: Access to data is always important but information exchange is a technical question. Developing good open standards is very useful and the Open data Foundation is active in this area – it’s just we think you also need to know what the data is being used for, what decisions does it evidence. How does it construct the commissioning enterprise and how does it construct its user. Of course the other big issue is the rise of transparency as new technology of power, but that might be too large a question for here.

We do not design an experience but more create lenses to view, compare, laugh, reveal, complex sets of relationships, as in the Open Data Book Stabber for Invisible Airs, where we took books from libraries being closed down by the Council and stabbed them with pressure from other areas of Council spending. In English pounds per square inch (air pressure) and pounds as in currency (economic pressure) are linguistically related. So using pounds of air pressure made people laugh and comment on the data, the machine, the Council itself.

We could then take these comments and play them back to the council as a film in the chamber room where the budgets were made. 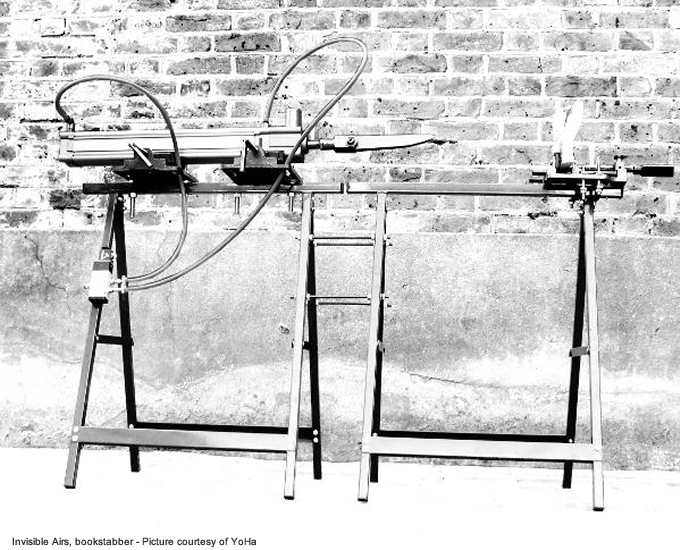 Mattia Casalegno: How did the council react to the project?

YoHa: Hmm…as with all power it flows in different directions. Some were intrigued others were disinterested. The Bristol City Council decided they did not want to be involved with the documentary because it had scenes of rioting in it. In some ways it was a missed opportunity to have a real impact on those working with data and open up the idea of transparency as a technology of power. This could have made a real difference getting a critical debate going in the workplace about how municipal truth is created.

Mattia Casalegno: Most of your “contraptions” are embodied metaphors, rather than representational. Can you talk a bit about your decisions to construct metaphorical interfaces for work that pulls from data or information-based material?

YoHa: We first used the term “contraption” to describe Coal Fired Computers. At its most simple, the word connects the imaginary and the technical. It first come into usage in the first quarter of the 19th Century at a time when Foucault type discourses were still forming and it described the inventions of the tinkerer, the discredited, the inventing other. There is a bit of complicated thinking behind this term but we are happy that it creates a space in which people feel able to laugh, comment, engage.  Our interest is not in pulling data but how the lived logics of the relational machine constructs governance. How we participate in such machines and how they participate in us? 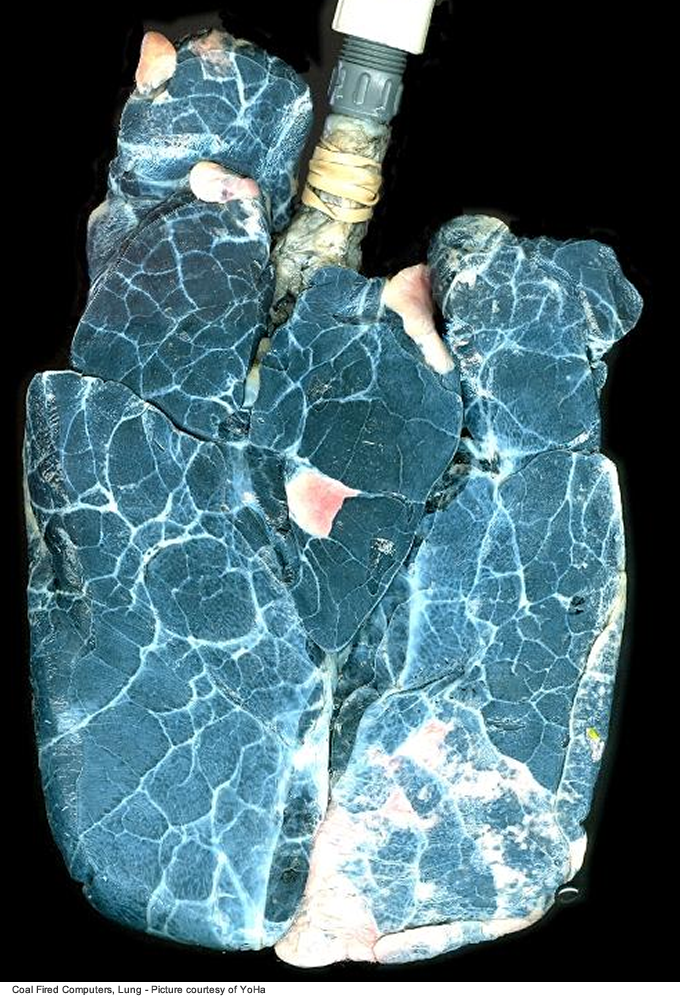 YoHa: The “relational machine” is the formal definition of the Relational Database constructed in the mid 1970’s by the ANSI Sparc group. It is based on set theory and a few other bits and bobs of mathematical theory. It was first defined in a paper by Ted Codd in 1969 and then the CIA commissioned Oracle from that paper. You can think of it acting like an architecture of lists, a truth amplifier. The “Lived Logics” is the way the database needs to be fed. It’s a hungry machine that requires input. It constructs the world around it to feed its needs.

As an instance, supermarkets are just interfaces to databases that govern all aspects of the business, ordering delivery, costing. If you work for a large supermarket then you will have a certain view of the database depending on you role. A low level grunt cannot see what a manager sees. So put another way, governance is built into the conceptual view of the database and constructs different views of the enterprise dictated by your role.

Mattia Casalegno: It reminds me about the current “debate” on Edward Snowden’s allegations about the NSA’s program PRISM ( http://www.guardian.co.uk/world/video/2013/jun/09/nsa-whistleblower-edward-snowden-interview-video ). The NSA is allegedly accused of feeding an ever increasing database of private data parsed through the servers of internet firms like Apple, Google and Microsoft. What strikes me the most is that here in US there’s actually no debate at all, in a recent poll 66% of Americans justify the gathering of personal information to fight terrorism. It seems people are more than willing to exchange data for safety, especially when it comes down to national security. Is this an inherent consequence of how the “lived logic” operates?

YoHa: I think the debate in the US is really interesting and someone summed it for me like this: would you rather trust Google, Microsoft or the CIA and FBI? Given that scenario Google looks the best bet. I think many countries in Europe still imagine we have a civil society which they invest in to protect them, although I’m not including the UK in this which is just an aircraft carrier for financial services. 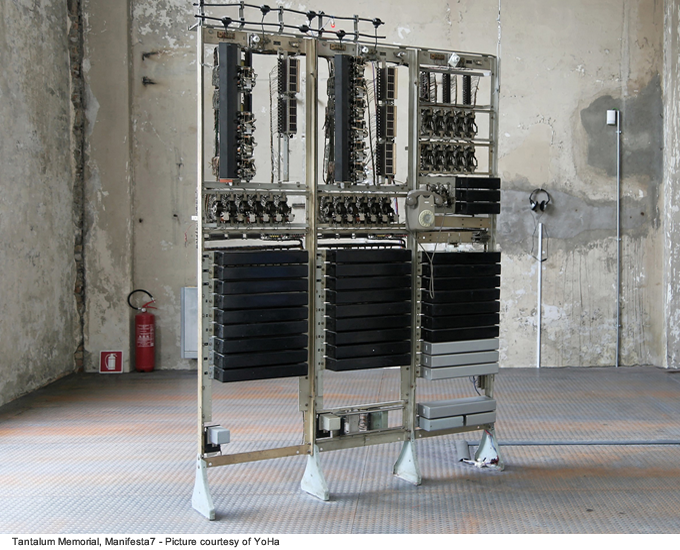 Mattia Casalegno: A lot of your projects investigate the relations between pre and post-industrial materials – coal, aluminum and tantalum – and their uses, abuses and effects on labor, societies and media production at large. You also often relay on bodily metaphors – I’m thinking ad example of the use of artificial lungs in Coal Fired Computers, or the sound of breathing in Lungs. How power, media, bodies, and death relate to each other in those projects?

YoHa: Counting corpses is a useful way to understand contemporary capitalism and I wish in many ways this was our reasoning. But we are interested in something else. What happens when we become collective with coal? How does it remake us as we remake it. What kinds of organism are we when we combine with it as an individual. The steam engine grew from its potential unifying time in the 1840’s making trains an efficient way to control space. Because of the ease of travel pedigree dog shows began to have the same judges and before long breed standards dramatically effected the genes of domestic dogs.

Mattia Casalegno: You researched extensively also the exploitation of aluminum in specific regions of Europe and its connection with labor and power. As for the project Aluminium (2009, http://yoha.co.uk/aluminium) a futurist graphic book and film about the social history of aluminium

YoHa: Ores are an important form of media. All the copper that has ever been mined, for instance, is still in circulation. Also the Bronze Age is in the wires that circulate the Earth. I was interested in aluminum as the Fascist metal of choice and its links to electricity. The 20th century was such a futurist century with the aesthetics, eugenics of the atom bomb, metal Christmas trees, tinfoil, espresso machines.

Mattia Casalegno: You started working together as Mongrel almost twenty years ago: do you see YoHa as a continuation of that experience? What’s the difference between the two projects, and how your practice evolved during this time?

YoHa: We always worked with lots of other people along the way either closely with other core members of Mongrel, or project by project with different communities. Mongrel worked with people who it established some day-to-day relationship with. YoHa works more with systems, abstraction processes and is primarily interested in how machines participate in us and us in them. This is a curiosity with a space that is “not human” but also not “not human”.