Maja Smrekar builds her oeuvre with consideration through various interrelated themes, tackling the last geological period of the Anthropocene, which began twelve thousand years ago with the Neolithic Era and is marked by man’s impact on the Earth’s ecosystem.

This includes the increasingly rapid spreading of invasive biological species that are displacing native species from their biological niches. Yet extinction awaits all living things sooner or later, not excluding the greatest invasive predator on the planet – man.

The exhibition Survival Kit for the Anthropocene – Trailer is conceived as a useful set of equipment for biological survival in apocalyptic situations, while at the same time addressing the process of the disappearance of local cultures and economies in the grip of neoliberal economics. The latter is often presented as a neutral, almost natural occurrence that shares one feature in particular with nature – a mechanism for the brutal survival of the fittest. 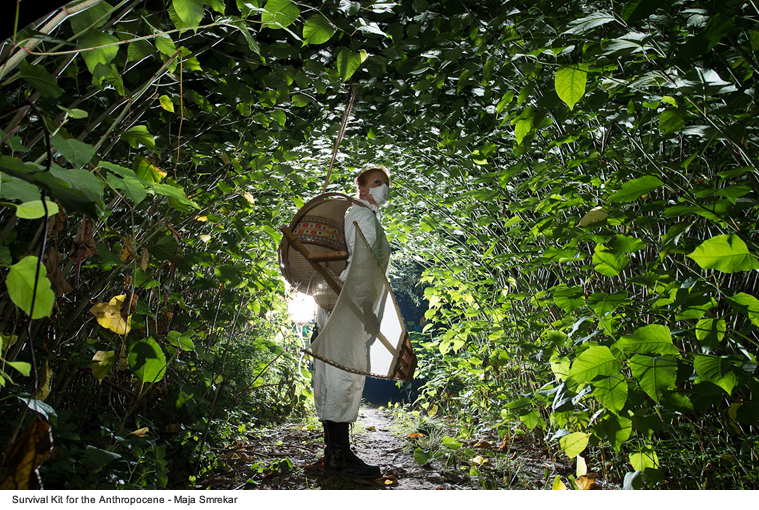 The exhibited mobile kit for survival, which cleverly connects contemporary art with folklore, is a hybrid between a beehive and the Slovenian peasant chest. Its egg-like form reminds of the symbol of life, whereas the small figures reminiscent of folk ornamentation that adorn its exterior feature the species that are becoming increasingly widespread and invasive on Slovenian territory: Japanese knotweed, giant hogweed, zebra mussels and harlequin ladybirds. The kit, in which the author has connected an autochthonous flax rope and pig bladders with the invasive acacia and bamboo, is basically a water reservoir with impregnated pig bladders, into which water flows, through water filters, along a bamboo tube.

The “eggs of life” drawers contain the basic tools in case of an apocalypse, including a radioactivity indicator, iodine tablets and protective mask, with an attached wooden two-pronged pitchfork with detachable mesh that can be used according to the imagination and can serve as an umbrella or a fish trap for catching fish, a pitchfork or a convenient crossbow. The practical and useful survival kit also acts as a paraphrase to the vanishing cultures and local economies that are dissolving in the pool of contemporary neoliberal capitalism, and a critique of mainstream ecology that is “solving” climatic change within the global neoliberal framework, therefore within the existing capitalist paradigms, in which corporations are only being strengthened through tax havens with each passing day.

This is the spirit in which the opening of the exhibition was also conceived, at which the Katice vocal group sang the artist’s poem “The Anthropocene Manifesto” to the tune of the Prekmurje song Ne ouri, ne sejaj (Don’t Plough, Don’t Sow) in the invasive English language. Besides intelligently opening up subject matters, the project – which was in part designed by Andrej Strehovec – also excels in its very imaginative and aesthetic implementation, which can generally be said about Maja Smrekar’s work. 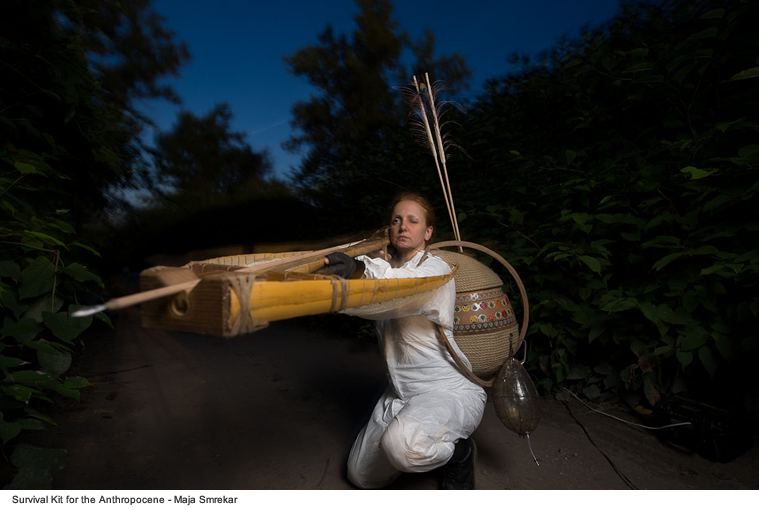 The fast growth of invasive species – a natural phenomenon triggered by the Homo Sapiens species –can be understood as an (un)intentional experiment enabling us to objectively or subjectively directly observe the dramatic sixth extinction of species on Earth. Continuing our opus of the exploration of the typology of invasive species, through intersections of geopolitical parameters on one side and local-sociological paradigms on the other, we picked some of the signifiers of the national cultural heritage and transformed them into the Survival Kit for the Anthropocene (after which the present geological epoch is named).

This kind of intervention into design, design being based on national treasure and therefore imbued with a strong aura of collective emotional experience, which makes it impossible to avoid national and transnational interests, encourages reflection on the dynamics of market globalization. The latter corporately cannibalizes local economic dynamics and (re)directs them to the common signifier (uniformity) – the franchise. The use of the tactical medium in the project comments on the imperatives of the positions of power and ideology, to which Ecology connected at the very beginning.

With the subverted franchise Survival Kit for the Anthropocene – Trailer, which serves as discursive agent, we can, after all, ask ourselves about existential dynamics in the near future reality in which the survival of the species will depend much more on the knowledge of the local environment than on univocal adoption of global ecological ideas on the basis of the common ideological denominator. 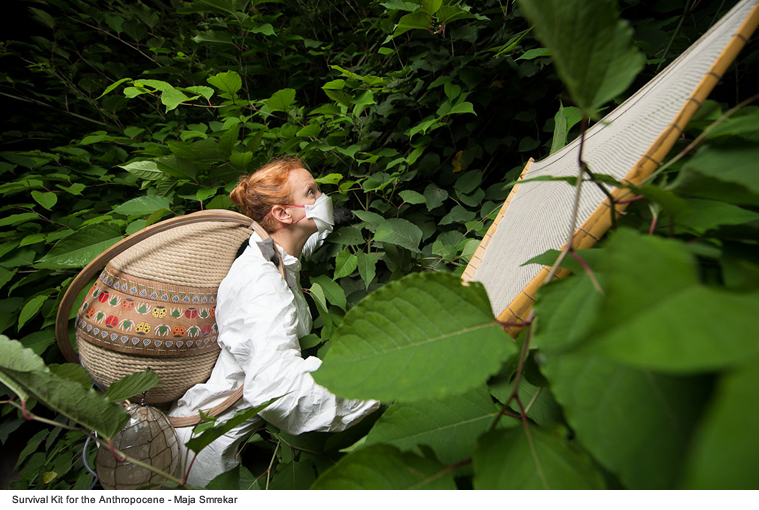 Maja Smrekar was born 1978 in Slovenia. She graduated from the Sculpture Department of Academy of Fine Arts and Design in Ljubljana, Slovenia. Her main interest is dwelling towards the concept of life by connecting humanistic and natural sciences into the interdisciplinary artistic projects. In 2010 she organised the International Festival HAIP10/New Nature. The festival took place at the Multimedia Centre Cyberpipe in Ljubljana where she has been active as an artistic director for two years. She has been awarded with the 1st prize at the Cynetart festival 2012 by the European Centre for Arts Hellerau (Dresden, Germany), Honorary mention at the Ars Electronica festival 2013 (Linz, Austria), as well as the Golden Bird Award 2013 – the national award for special achivements in the field of visual arts by the Liberal Academy (Ljubljana/Slovenia) for the project Hu.M.C.C. Maja Smrekar lives and works between Ljubljana and Berlin.