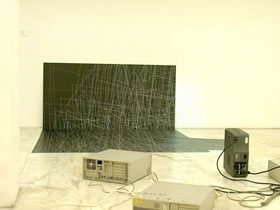 Some issues ago (http://www.digicult.it/digimag/article.asp?id=189), in the historic June 2005 issue 6, to be precise, DigiMag had already introduced Maurizio Bolognini’s work on the occasion of an exhibition whose title was “Programmed Machines” at the “Villa Croce” museum in Genoa.

Some years ago, I had known his work during an exhibition at the Museo Laboratorio di Arte Contemporanea (Laboratory Museum of Contemporary Art) in Rome , where I had started to work in that period. His exhibition, entitled “Infoinstallations“, presented some of his most famous works: the “Sealed Computers”, impregnable cases of PCs that were programmed to generate random images, which were not shown, but lived within the system that created them; “SMSMS”, a kind of intervention aiming at cracking one of his sealed computers by means of a mobile phone, intervening in the flow of generated images that, in this case, was displayed by a projector.

Since then, during the five years I have spent at the MLAC, I have heard much about this mysterious and intellectual artist, who lived secluded (in my opinion) in Northern Italy, far from a chaotic but also lively city like Rome, and who acted poised between the belonging to a world of art that seemed to me, at that period, a bit mainstream (where he exhibited) and the world where there still was an aura of experimentalism, such as that of media. Art system with a capital “A” and festivals that were devoted to media and technologies; works of art and hacklabs; electronic democracy and installations in the museums: what strange character managed to cope with unconstraint, between two worlds that are parallel and, although they sometimes intersect, they communicate by using completely different linguistic codes and self-referentialities?.

To Maurizio Bolognini, Domenico Scudero, the MLAC curator, had devoted a book that accompanied the “Infoinstallations” exhibition; moreover, Bolognini regularly contributed to an editorial project referring to the MLAC, the “Luxflux” magazine, in which I took part for some time.

Bolognini was the writer who was always on time and meticulous, who sent articles in time, full of references, notes, images, captions: I always had the idea that it was a passion controlled by the necessity to communicate, to be exhaustive and make oneself understood. I remember having collected and brought to the publisher interviews to people like Eduardo Kac and Roy Ascott, Mario Costa and Robert C. Morgan: our magazine was swarming with texts that were organised and written by and on Bolognini, where the artistic and cultural avant-garde of the last twenty years was examined thoroughly and explained, pinpointed and discussed, categorized and made accessible. Therefore, beside a bit more academic conversations on contemporary art, this artist-researcher talked also about topics like networks and “new technologies”, bioart and nanotechnologies, art system and festivals, sharing and collecting, digital synthesis and activism.

The limpid language, the urgency to incite critical thought starting from information, names, projects, definitions; the absolute distance from the linguistic cryptic and self-referential clichés of art critics who love “writing in an intricate way”: they were all elements that betrayed the “constructive” will, typical of those who are “producers” and want to recreate the coordinates of a context where they can insert and give a sense to the experiences in which they are immersed.

Those essays and those conversations today are collected in an anthological book, edited by Carocci in the “Storia dell’Arte” collection and which will be distributed from October: “Postdigitale. Conversazioni sull’arte e sulle nuove tecnologie”. The book goes over and documents many years of Bolognini’s research and theoretical exchanges with other artists, curators, critics and historians. Together with the already mentioned articles, published in “Luxflux” (among which there are also two long interviews, respectively of Domenico Scudiero and Simonetta Lux), the artist offers conversations with Richard Stallman, Enrico Pedrini and Gerfried Stocker. With absolute carelessness as regards the limits of the context, Bolognini mixes different topics, gurus of the hacker ethic and of the copyleft with gurus of collecting, famous scholars with enfant prodiges of genetic modifications.

Bolognini himself explains the reason to us in the introduction of this text/research. The art that is based on the use of technologies has come to a turning point, after a first pioneer period. The art that is linked to digital technologies is stabilizing: it is enough to see the slow but gradual opening of museums and institutions (the “art system”) and the introduction of digital instruments in the production of artists that have very little to do with technology. Therefore, this is the moment to break limits and encourage art experts to think  from the interior of the effective experience of a producer and not of the theoretical construction of a critic  over the meaning of the word “digital” (it is enough to read the conversation with Simonetta Lux, where the author explains, in an incredibly simple and illuminating way, the difference between analogue and digital) and what kind of artist is the person who thinks about the functioning of the instruments he/she uses and puts in check the sense of the art at the beginning of the twenty-first century.

In short, a militant book, which tries to clear up mistakes and doubts, simplifications and banalities of that chaotic hotchpotch, whose definition ranges from multimedia to new media , from interactive to virtual , from hi-tech to participation . With a precise aim: to deconstruct the postmodern idea of art, according to which today, in the artistic research, there is not any “chance of choice and radicality” any longer, but a self-referential indifferentiation in which the metaphors of art and not the reality are criticized.

Digital technologies”, explains Bolognini, “introduce some important issues in the artistic experimentation”: nature of media, bioethics, democracy, involvement of the public, emptying of the sense of the authorial paternity (and therefore royalties and copyright). These themes are essential instruments for the interpretation not of the art, but of the world, and thus make this experimentation the true avant-garde of the present time.