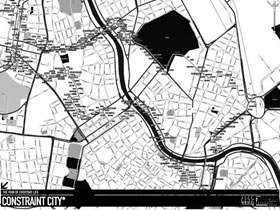 A work of controversial influences, where some thematic threads dear to the artist seem to interact in a redundant way: from Michel de Certaeu’s cristological emphasis, to De Sade’s and Leopold von Sacher-Masoch sadistic pleasures, all the way, not surprisingly, to Baudelaire and his fl?neurs, with their derives in labyrinthine and infernal cities. Sterlac and cybernetic bodyart, immaterial paths in post modern metropolises, chronologically conclude the journey in Savicic’s “poetics of martyrdom”.

Gordan Savicic‘s contemporary fl?neur walks the streets of surveilled cities wearing a corset equipped with constrictive mechanisms. The special garment picks up electromagnetic signals generated by wireless networks that are scattered through the metropolitan environment. In areas with especially high levels of electromagnetic waves, the corset tightens around the brave rambler’s waist, marking the skin with deep wounds.

The access points are picked up by a Nintendo DS Lite console, and a Linux Gentoo release attached to it transforms the radio waves into kinetic energy.

The performance closes with the production, through a GIS system (geographic information system), of a series of maps of his dangerous metropolitan hikes, where the areas with the highest density of electromagnetic waves are highlighted. These correspond to the deepest wounds on the artist’s body.

The artist and the city fuse together and get lost in the splitting of invisible paths. While the individual and his traces seem to dissolve in the numerical decodification of their passing by the technological extensions sensitive to the space that is crossed, the city manages to leave physical traces on the epidermis of the passer by, almost like an eloquent metaphor of the violent intrusion of the digital tech’s tentacles.

.
Cronenberg, after his “carnal” musings and videodrome systems, turned to the analysis of more interesting forms of control. Is this really how we imagine the future? And what about the present time? Let’s leave the masochists to their revolting technological frolicking. Let’s leave the fanatic martyrs of modernity to their quest for redemption.

For my part, I am unbuckling my corset.