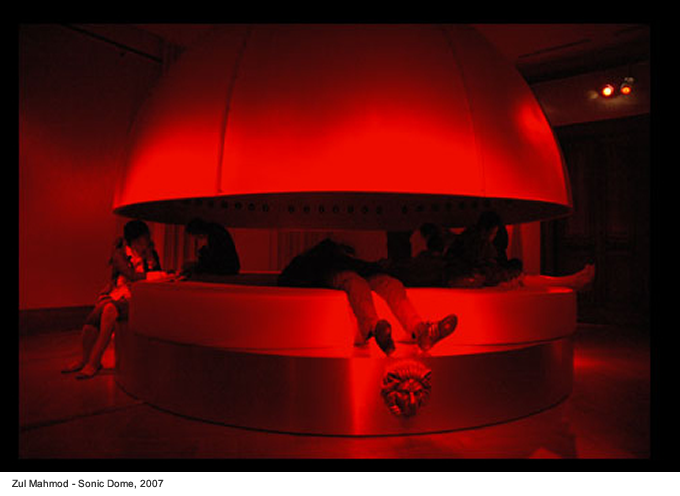 One of the most high-profile of a sound art scene in Singapore also including figures like Yuen Chee Wai, Zai Kuning, and George Chua, Zul Mahmod sets his own sonic practice apart by using techniques in sound to explore the relationships between media including drawing, sculpture, and architecture.

His work is often concerned with realigning and configuring the viewing or listening experience, working with the genre conventions of the gallery or museum environment to create new possibilities for critical reception.

Chosen to represent Singapore at the national pavilion of the Venice Biennale for a group exhibition in 2007, Zul presented there an installation entitled Sonic Dome: Empire of Thoughts that invited visitors into a hemispherical space to hear spatially constituted recordings of Singapore and Venice inserted within a composition framed by sounds produced by the artist’s own circuit bending DIY sonic machines.

Having come across his work on a number of occasions, including Biljana Ciric’s “Migration Addicts” exhibition series in Shanghai, “Accelerated Photon” at the Guan Shanyue Museum in Shenzhen, and most recently at the Hong Kong Arts Centre during a residency there, I interviewed Zul Mahmod to learn about how he sees his practice in terms of the relationship between sound and space, particularly in the Singaporean context. 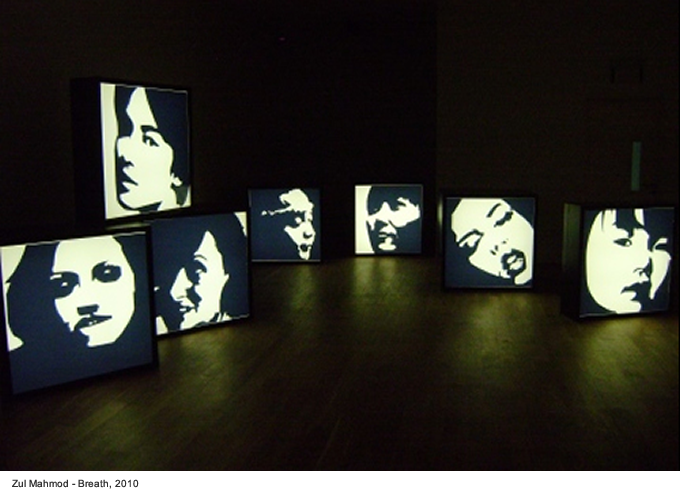 Robin Peckham: Could you tell me first how you see the sound and new media scenes in Singapore compared to other places you’re traveled and experienced?

Zul Mahmod: I feel the performance side of the sound art scene has been growing healthily over the last five years, but installation and interactive components remain slow compared to other places I’ve travelled. In Singapore, there are different communities exploring sound art, including theater and dance, music, new media, and design, even if each of these communities is represented only by a handful.

Robin Peckham: Is there a sound community? How do you position yourself?

Zul Mahmod: I do see that it is expanding now compared to 2005, when I organized a sound art festival. We are only a handful of artists. Personally, I position myself on both sides of sound art, performance and installation. Coming from a background in sculpture, I have begun to incorporate sculptural and spatial elements into my sound work.

Robin Peckham: Interesting. In your work, how do you see the relationship between performance and installation, particularly in terms of the different infrastructures–for instance, the tour of music venues vs. exhibitions in galleries and institutions? What kind of themes and issues crossover between these two worlds in your work?

Zul Mahmod: In my work, performance and installation are related to one another and based on shared concepts. It is a usually just matter of presentation. In my performance, I almost always create new sound instruments from which the sounds produced can be used later in an installation format, or vice versa. Installation is always more site-specific, in that the audience can only experience it in that particular space. Using the same concepts, I try to expand these possibilities into performance. 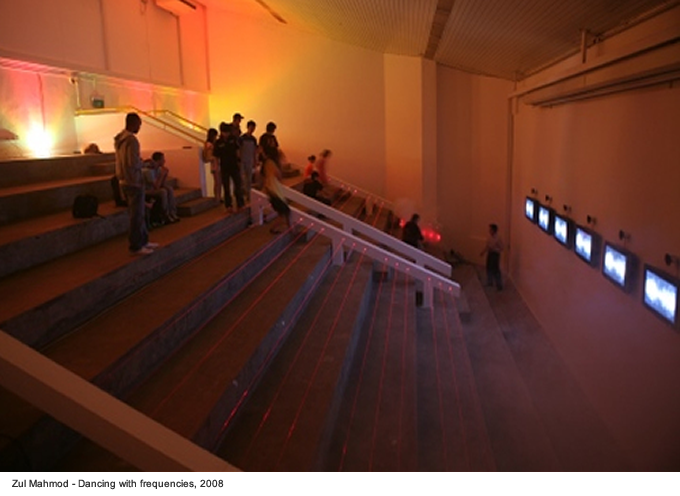 Robin Peckham: I’m particularly curious about how you fit in your earlier drawing practice, which often incorporates mixed media on paper in certain interpretations of appropriation and graphic design sensibilities. Do you see an evolution there, or a direct correspondence between drawing–the production of line–and sound?

Zul Mahmod: Drawings have been a big part of my work, from the beginning until now. This is how my thought process works before I start on new projects: I always begin with drawings followed by research and development, and only then move on to the final presentation.

Robin Peckham: This relationship with drawing is interesting because of your interest in activating architecture, as with the Arena show you did at the Substation a couple years ago, or W.O.M.B. in the same venue, both of which approached the distinction of space-in-sound and space-for-sound by using the building various as an instrument and an audience. But where architects would be interested in constructing that space, you are reading it, interpreting it, playing with it. Is this your idea of site-specificity, or is there another level of architectural design at work here too?

Zul Mahmod: That is my idea of working with site, but with “Arena” it is also very much about giving the space a new aural architecture. I approach different spaces in different ways: at various times it might become about the physical space, while at others I am more interested in the historical background of the space, the acoustics of the site, and the social functionality of the place. 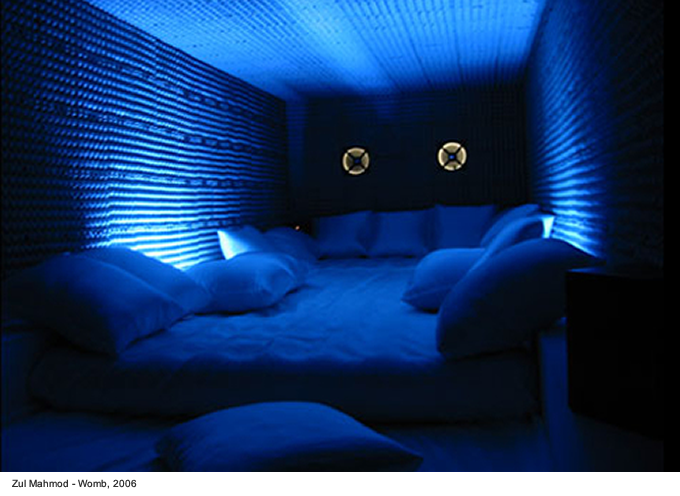 Robin Peckham: And, speaking of the Substation, what has your affiliation there been like?

Zul Mahmod: I am an associate artist with the Substation, which basically means they provide me with space, administrative assistance, and marketing.

Robin Peckham: Tell me also about the DIY instruments you were using during your residency performance at the Hong Kong Arts Centre last year, when I saw your work live for the first time. You were using a laptop, pedals, and then some objects you had assembled–can you describe your setup and what you wanted to do with it?

For the Hong Kong performance specifically, I was interested in exploring the ideas of a fantasy and reality city. I recorded the sounds of the city and played them back during the performance, adding another sonic layer. There was also live sound from the actual performance space in the Art Centre, which I picked up using a microphone and also existing sound without mic up. I wanted to use all of these resources to create different layers in an almost spatial composition. 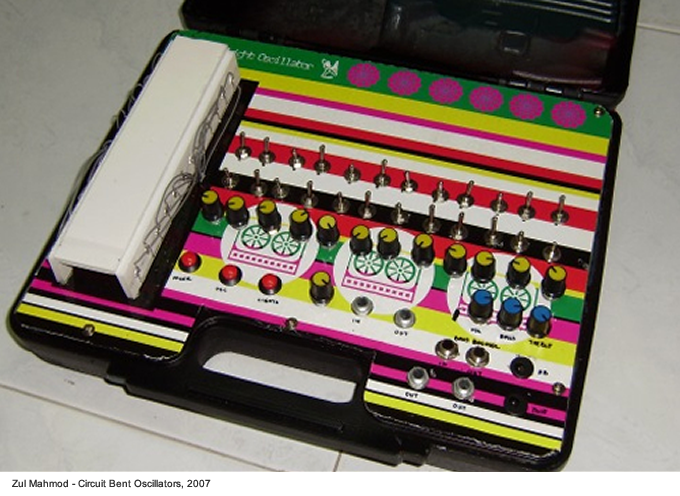 Robin Peckham: I saw your Dancing with Frequencies when it was installed in Shenzhen a couple years ago, which forced viewers into a matrix of responsive sensors that controlled the sound environment. Have you done stage collaborations as well, with dance and such? In mainland China stage productions are considered very uncool in the sound scene, but in Hong Kong there are some, like Dickson Dee, doing interesting things in that regard, so it is not a failed territory. It seems like the movement of the body could fit well with your interests in interpreting space.

Zul Mahmod: Yes, I have done several stage collaborations with both theater and dance productions before. For me it is about exploring and expanding further the use of sound art in multiple different forms. I just did an improvisation session with a couple of dancers last week, for example, using the basic idea from Dancing with Frequencies. It worked very well. The dancers basically composed the sound through their movements. I am also thinking of expanding the project further, where the dancers might control not only the sound but also the lights and servo motors.