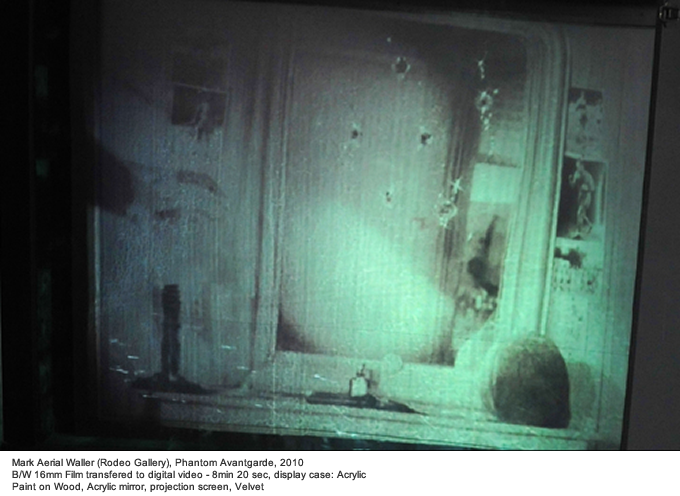 Collectors, curators, galleries, and curious visitors attended the eighth edition of the Frieze Art Fair: the Main International Fair of Contemporary Art held in London – Regent’s Park from October 14th to 17th. The dynamism of the 173 galleries members who represented 29 countries and over 1000 artists shows that Art Fairs are not only about money.

Although Frieze Art Fair was born with the main intention to sell the artworks, the show has become over the years a cultural event that includes discussions with artists commissioned ad hoc, projects and collaborations with International Institutions such as Signal (Sweden) and Vector (Romania) in 2010.

The artists that I have chosen to follow at the Fair are working primarily in the area of ‘innovative media”: video art, installations and sculptures that often include the use of consumer goods (household appliances, designer items, technology products ) located in non-conventional settings. What emerges from this report has a flair for the remix, for the recovery of both analog and digital materials and for the installation of archival documents; moving from recovery of archive images from the 60s – 70s as in the case of the Israeli artist Elad Lassry, to the video mute Floor, shot in super 8 transferred to 16 mm film by Charles Atlas, and continuing to the assembly and use of appliances, film extracts, fragments of furniture and pieces of art existing that Haroon Mirza associated to produce audio composition. 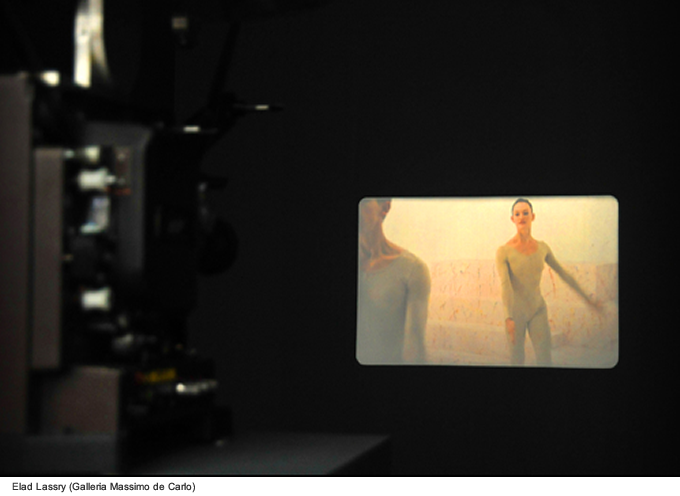 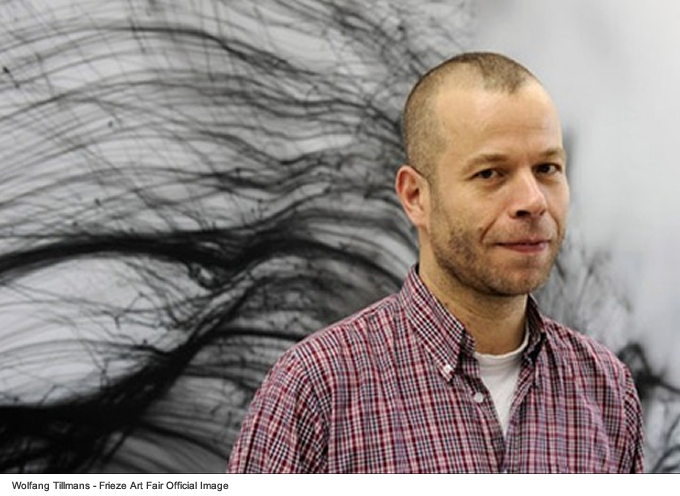 This report focuses on the artists themselves who then become reality through their work ranging from surreal sound installations and visual performances – the images are used as a means to transport the viewer into an other space-time, real or imaginary, past or future.

Where does the contemporary artist stand in relation to art history? As stated by Wolfgang Tillmans (keynote speaker at Frieze), even when the artist touches on topics and styles already used in the past, the originality of the work is the fact that the time and the context in which they are situated are in continuous change. Therefore they leave a space for innovation. By its nature, contemporary art questions the relationship with the classical past. For the artist, sounds, images and objects are no longer sufficient for themselves. The harmony between the individual parts has to be broken to create a remix between culture, history and fiction.

Wolfgang Tillmans is a photographer that began in the late 80s to use the printer as a medium for his work – this “mechanical medium” has over time become his main “love affair”. Later, he found interest in laser printers that allowed him to enlarge pictures of magazines and reportages. Then he discovered a “digital texture pattern” and he started to work with those degradation of color that have made his work unique. These are images that seems to be drawn with softwares as photoshop, but that turns out to be simple photographs of fluids or weathering.

The artist loves the purity and charm of the paper as a medium, which allows him to see the photos as “photo”, in other words as physical bodies and not as “images” that have an information content. Therefore Tillmans uses equally the words “picture” and “image” because the photos are not perceived only for the content they represent. In his opinion, the camera often lies about what is in front, but never lie about who is behind it. Tillmans is not interested in the proliferation of images, the quality of the picture lies in its simplicity and transparency. It is for this reason that his photos neither aim to enhance the staging nor invite us to understand how they were created. 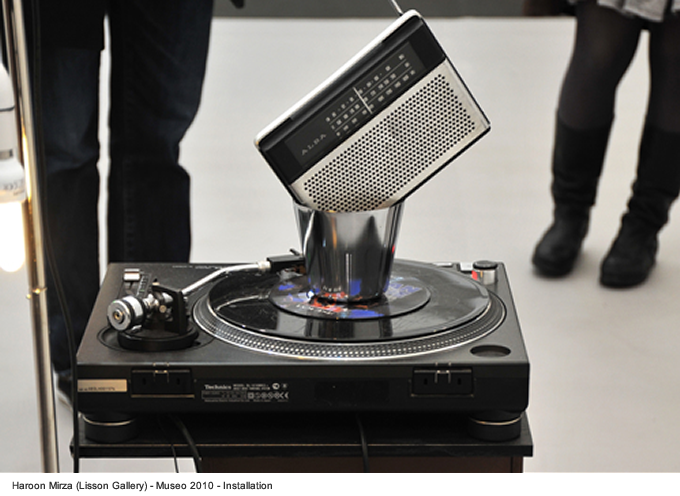 Israeli artist Haroon Mirza, born in 1977, studied at the Chelsea Art School and Goldsmiths. He now lives between London and Sheffield and his work focuses mainly on sound and installation. The artist arranges sound sculptures that are mostly composed of vintage furniture and objects mixed technology, where the use of acoustic elements and sound in general are an integral part of his work. Haroon Mirza tries to deepen the study of visual and acoustic as a pure aesthetic form, limiting the perceptual distinction between music, sound and noise. One gets the impression that the artist is fascinated by the idea that his works remain open and in continuous movement and contains a sense of experimentation and research. A truly experimental work relationship between the artist and his work where the sculptures can be seen as autonomous creatures, since it is unpredictable to know what kind of sound they will produce.

Phantom Avantgarde is a film composed of elements of collage (pictures of Parisian intellectuals of the mid-1960), photocopied and enlarged to life size and a selection of key films of Existential Cinema. Once removed from their historical and cultural content the cutouts regain their life and their three-dimensionality. The artist gives photograms a second opportunity to express themselves by adding subtitles from the novel by Louis-Ferdinand Celine, Journey to the End of the Night. In this way the characters seem to become curious about themselves in their new awakening. Both film and its staging have been designed to create a stable architecture that holds together perfectly the frames that Waller was selected by Jean Cocteau’s Orphée (1950), Louis Buñuel’s Simon of the Desert (1965) as well as references to Le Jour se Lève (1939) by Marcel Carné.

The choice of using a full length mirror that reflects the video projected onto the rear projection screen is quite unique and is part of the staging of the opera. In this way the image can be displayed both on the screen and on the opposite mirror making it possible to have two different perspectives on the work. This allows the viewer to enter the installation and to become part of the reflected image. 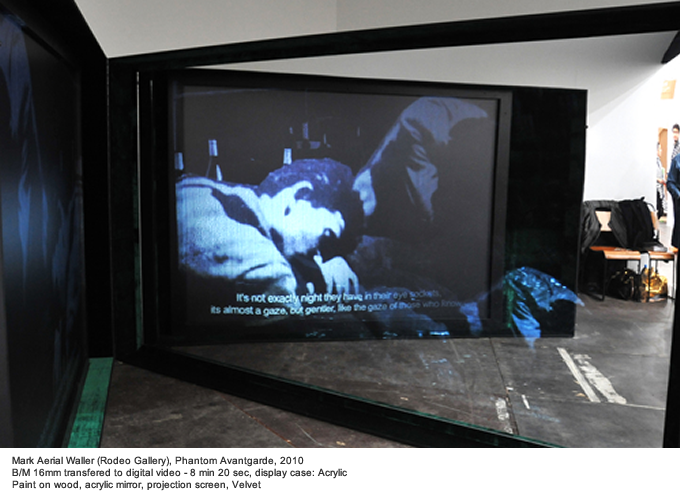 Impulses to Reanimate a Dead Alsatian, 2010
Ink on paper and recorder
Variable dimensions

The piece evokes the performance of Dennis Oppenheim, Unitled Performance, 1974  in which an Alsatian dead dog was placed on a keyboard: the decomposing body created music by pressing different keys, depending on the movement of his body. Atkins’ work was created in a similar way, using the artist’s body and the keyboard to create the feedback, bringing to light this little known performance.

In addition to Ed Atkins the Gallery represents also the artist Cosey Fanni Tutti, a founding member of Throbbing Gristle, that in my opinion deserves to be mentioned since we are talking about art and music.

They are artists that rework existing material, artists whose works revolve around socio-cultural systems, such as religion, mass consumerism and advertising. Artists that study the movements of the body, which break down to the smallest components the dance, the music, the film frames, the photos, in order to reflect on the simplicity of the elements that constitute them. We find then a carousel of pictures, music, video, photos, noise, lights, silences that seem trivial, fruits of a everyday collage that leaves an appropriate balance between the new and the already seen. The artists displays a knowledge of the tools of expression available to them. In the field of cinema, for example, many interventions are made at the level of framing, context, sound or non-sound, color and focus. 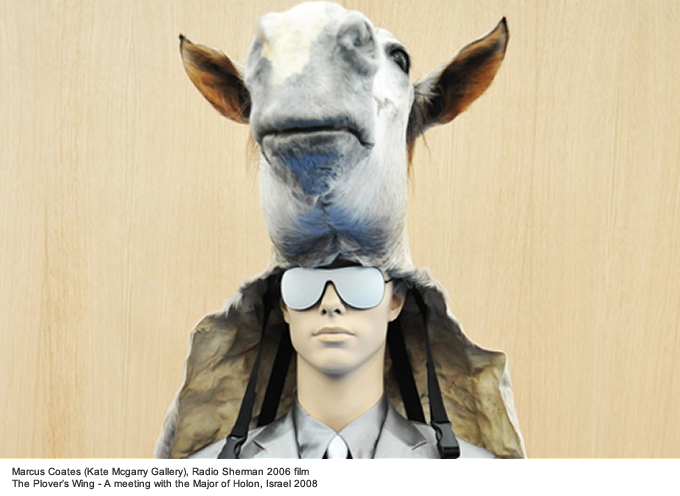 Recombining these elements we can get installations and video art  which are ways of expression quite complex and multifaceted as they lends themselves to the use of different tools for their staging. In other words it is a desire to make art that does not end in the aesthetic taste of the artists, but includes also a mastery of technical means of expression that are the basis of commercial media production.