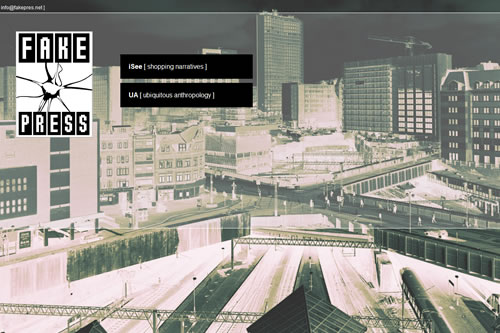 The scenario described by a timless flaneur as Baudelaire has been significantly modified during the last one hundred and fifty years, but the image of those “mysteries that flow like saps in the mighty giant” belongs to us. An information layer in multiple levels and distributed over the space, as well as objects, people and architecture, determines the possibility to change the world into a hybrid reality generated by a great variety of viewpoints, voices, shapes, gestures and sounds.

SPIMEs (1), location based media, augmented realities, a distributed interaction, sensors that capture changes and distribute them, emotional and experiencing design: these are the main tools that enable the transition and help the transformation process.

Enormous implications, anthropological, philosophical, political, economic and relational: reconsidering the way we communicate, exchange, share, distribute and disseminate knowledge within and through Infoscape(2), where to interact with the inhabitants/elements (both physical and immaterial) of the new landscape, a desire/need is evident and it deeply affects the collective mind

A new idea of publishing house

How does the role of the publisher change in this context? And how do literature, essays and the reading experience change? Which and are the media involved and how do they get involved? And finally, what are the faces and voices of these stories? How are they told, and where?

According to Salvatore Iaconesi (3) and Luca Simeone (4), as well as for Federico Ruberti who soon joins the conversation with great enthusiasm about the project, the answer is FakePress (5). A new model of publishing house, based on the creation of open narrative, cross-media, multi-artist, able to use location based technology, augmented reality, SPIME and natural gestural interfaces to build layers interpreting reality through non-deterministic and intrinsically pluralistic network issuing processes.

The publishing house does not lose its basic requirements – select, package, distribute information. But it expands. Interstices, distributed displays and projections become a stage to represent the information, the spime stories and the sentient cities(6): everyware. the book shape is disappearing, and it has been disjointed and rejointed through media tracks made by a variety of subjects: wide-tagging, geo-localised contents free to download, open-ended stories.

In short: ubiquitous publishing and storytelling distribution. A process where design, learning methodologies, education and narrative forms cross together and easily tend to adopt strategies p2p, by changing theorists, specialists and “staff” in new types of authors/publishers/communicators.

A FakePress publication is made according to precise methodologies. The topic – that was the result of a selection through projects, authors, social networks and territories – is described trough many media that can express a geographic and time distribution of the contents, possibilities and forms of interaction, the creation of social relationships, the interaction of bodies, emotions, ideas and knowledge, according to the case. This step is performed through the contribution of some groups

According to this description, the contents are joined together using a series of existing platforms (and made from some mashup works) or specially prepared. In the case of the first publications, for instance, three communicative channels have been created: one in relation to the web, one to the territorial consultation and the last to the paper format consultation. These are able to interact with other modes.

“The contents – as Salvatore Iaconesi explains – have been joined thanks to a modified version of the WordPress platform to create a fluid process in which a group of publishers/authhors could prepare the contents for all the channels. On the one side the elements of the publications are arranged in a visual way through georeferenced coordinates given by GPS, Google Maps and Google Earth functions. On the other side the same contents are organized to be accessible both from the web and on mobile devices ( iPhone, Android and Symbian platforms with adequate number of technical requirements, by now), covering the territory. And on paper format, for books that through a crystalised form of hypertext allows to serf on places, times and points of view”.

In short: a web application; a mobile platform to view the publication in the form of location-based contents and of an expanded reality; a paper publication in the form of a hybrid (half touristic guide and half a crystalised hypertext) produced in self-publishing and printed on demand, and wordly distributed online. The three levels are not competing but correspond to different needs and use different objects/products, while other publications have other channels of communication, and there will be different forms of interaction and different technological devices.

.
Then, reading becomes a complex activity, which consists of reading the classics, or looking at geographical and architectural locations – where you can experience contents through the places in which they were conceived and see the reason of their existence  or as well, it can be the ability to make continuous changes of perspective between authors, topics, times and spaces.

To get a better idea of the browsing experience, of visualisation and of the type of platforms used, we can finally surf the website of NeoRealismoVituale-Nervi (7), an ongoing publication by FakePress, but perfectly serves its purpose .

The newborn FakePress has already had its official baptism in Rome at the Frontiers Interaction V (8), an environment that deeply belongs to it and which has shown interest to blend its stimuli

Ubiquitous Anthropology is instead a project in which it will get involved in the future. Anthropological research by Massimo Canevacci on the Bororo, population of Mato Grosso that the professor has been studying for about 20 years, turns into a cross media publishing and location based web application where access is a prerequisite for the creation of a “tourist guide “ethnographic evolved and a new way of conceiving the academic publications /research.

We’ll talk about Ubiquitous Antropology in another article.And we leave with a clarification: apart from its name, FakePress is a real publishing house open to work with artists, researchers, institutions, and entrepreneurs interested in experiiencing the same viewpoint and the same themes that inspired its creation.