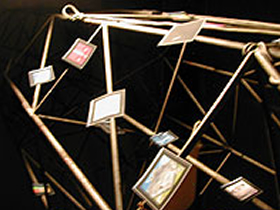 The number of images surrounding us is everyday increasing in events and place of every kind. Sometimes probably you have thought about the existence of a secrete meaning behind the images that are projected on screens of club and festivals and about that meaning construction.

The existence of a meaning does not appertain and feature all vjing works, but is often subordinated to an aesthetic use of images turned on sensation and emotions. Semantic vjing born from the need of giving images a sense and of building a narration also in the absence of a story board. Various projects appertaining to this section experiment different ways to play with images starting from words.

We start in these review from the work of Eugenio Tisselli, artist of mexican origin based in Barcelona, author of the software “Semantic Vj“. Already know in the Net Art world as founder of the group Vaina System, Eugenio Tisselli, won in 2003 edition of Ars Electronica, a special mention for the installation ‘POL’.

“Semantic Vj” explains Eugenio, ” belong to a project series called “The Motorhueso net experience“, containing various projects focused on the image research and on synonymic links trough web motor of research. The first project, called Dada newsfeed (http://www.motorhueso.net/newsfeed), works taking in a first moment fresh news from the server and then searching for an image related to one of the words of this news and presenting it on full screen. Clicking on the news, words are substituted from they synonymous.

At the end Synonymovie (http://motorhueso.net/dcr/synonymovie/synonymovie.htm) produce a sort of film composed by images linked one to each other by their meaning: the first image is related to the first word, the second image correspond to a synonymous of the successive word, and so on..

Last of the series comes Semantic Vj, a software tool ironically defined “a tool for lazy VJs”. The VJs that use this software have only to write a word that corresponds to the images that they want to show and then images appear on the screen and move themselves.

At a first sight the Vj could seem doing a little work, but behind this process stay a very strong idea: the possibility of manipulating images’ sequence in real time respecting a semantic logic. “I have seen” tell us Eugenio ” many vjs projecting really complex images, with very interesting special effects, but without narration purport .”

The work of Tisselli deal with the subversion of the vjing canonic manner of production, working before on the process of meaning construction and after on a images research process, helped by the semantic nature of the web. There is a double work in the meaning construction, in a first moment is requested to the user to digit a word to activate the narration mechanism, in a second time the web act as a big resource of meaning and values, linking the word to a concrete image. The link between the words and the images depends on the arbitrarily value of meaning and from the role of tag as selectors of the informatics choose of the information.

A software such as Semantic Vj allow the VJ to work on the construction of a narration in an easy and fast way. Obviously it is not possible to create a film in real time: films follow a linear structure in which, except experimental films, images concatenation generate a story.

Anyway is possible to maintain a certain narrative intentionality also without having a story board and at the same time without renounce completely to meaning as the VJs that project effects and images in a fragmented manner do. Semantic Vj has been inspired from the ideas of Lev Manovich on narration and Database, and from his project: “Soft Cinema”.

Lev Manovich sustain that in a “database” of well organized audiovisual fragments, where each fragment has got his “tag” or “metadata”, is possible to create emergent narrative axes , introducing words describing what we research as final result. For example if we put in the words “car” and “night” the database should answer with a images, sounds or videos sequence containing effectively cars in the night.

The precision of this process depends on the algorithm operating in the database and on the optimization of the information contained inside it. If we think to internet as a big database, we can find very sophisticated algorithm, such as for example the ones used by Google. But what happens if we insert the word “cane” in the images’ research motor? We will obtain images representing what the word means in English but also dog images, as dog in italian is cane.

This happens because the organization criteria in internet are not yet standardized. Images on the net has not got tag associated and we cannot know as them have been classified. An exception to the standard is Flickr, where every image has got it’s own tag and metadata, but this represent only a little example. Tisselli sustains that in the future exploring the link between “VJing” and “image search engines” will become everyday more interesting.

“Up today” says Eugenio, ” I have done only a few VJ-sets using Semantic Vj, but this is due to the fact that only a few clubs have got internet connection here in Barcelona. My most recent session had been in an event associated to the festival Pixelache (http://www.pixelache.ac). Semantic VJ is a sketch of what I would like to focus on in the future: I’m already considering to work on a Semantic VJ 2.0, which may leave more possibilities to the VJ. .

Internet research is becoming an important element for several vjs: take as a sample the software Satellite Jockey (http://satellitejockey.net/), by the brazilian Rick Silva, which use material coming from Google maps. Take a look to the interview by Marco Mancuso on Digimag 16 – July/August 2006, without forgetting the project WJ-S by Anne Roquigny interviewed by Marco Mancuso on Digimag 12 – March 2006.

I wrote a Manifesto Text Jockey in 2002 too; there you can read some of the ideas behind MIDIPoet.