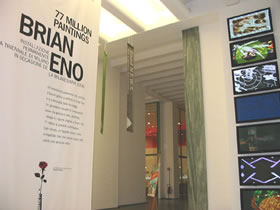 Milan is always the same. It’s got potential but it doesn’t buckle down. It’s the Italian cities pupil: the one which could, but doesn’t ply. The one which does the needful, that impresses, but has little new to say.

The phlegmy and lazy Milan showing itself doesn’t betray its character. It uses well-known artists as a screening to the lack of will to experiment (or to risk) setting itself against that underground humus made up of individuals, professional people and artists working to overturn this discouraging trend.

The 7 th edition of Milanesiana , festival promoted by the province and held at the Triennale, was a clear example of this deep gap between appearance and quality. It opened with 77 Million Paintings, a Brian Eno’s audio-video installation presented as an “exceptional artistic/video event”. The only exceptional thing was the money they spent.

21 high-quality plasma display panels welcomed the visitors at the Triennale entrance. They were placed horizontally and vertically to create different perceptive environments. In the monitors there was a never-ending video flux managed by software which self-generated virtually infinite combinations among about 300 images created by Brian Eno in the last 20 years. Music environment was perfectly coupled to images. IT was offered by Intel Integrated Performance Primitives for Apple .

As we were saying, the only potential was the budget spent. Maybe the exhibition organisers aimed at using the appealing name of a well known artist such as Brian Eno to attract the audience  and they succeeded. But if they wanted to show the state of current generative art, they didn’t. Many visitors wandered puzzled and bored. Younger people were captivated by the impact of the structure and not by the content. Some old people were caught peacefully sleeping on sofas.

Brian Eno, music player, multi-instrumental player, and king of ambient music is unanimously considered a genius in sound; he’s admired and esteemed for his musical production, but he’s less known as video artist because  I’m not afraid to say it  he’s not a great video artist.

His works are aesthetically noticeable but they lack in deepness and freshness and above all they are not innovative software art works. This exhibition seemed a waste to the people really involved in multi-media arts. In this field there are dozen of more representative artists who are more insightful and innovative, but they are artists who find room in minor and above all not-sponsored events and festivals only.

In opposition of other European capitals, which are trying to give good quality artists visibility, Milan is going on preferring well-known artist and it is missing the opportunity to invest in the spreading of something new and original. The city is stuck in an outmoded perspective and it is losing all the creative spurs in front of a more and more wide and prepared audience.

While Milan lacks in ideas, we are always waiting for an advance signal.