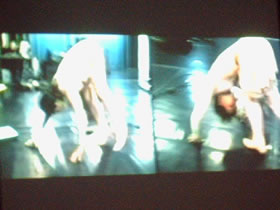 May will be a month full of dates in Barcelona this year. The many and unmissable spring festivals can represent the way to explore more or less remote corners, but always very interesting, of a city that seemes to be always discovered. Among these, OFF LOOP ’06 , a four-year-old video-art festival, seems to fit perfectly the suggestion of a route to discover the most active meeting points, essential tesserae of the cultural mosaic that turns Barcelona into an international attraction point. This festival is indeed situated in many places of the city, such as small galleries and cultural centres.

These often flowered from the meeting of few devotees and started with district activities that found the backing of the inhabitants, just like Almazen , central office of the cultural association La Ciutat de les Paraules , born in the heart of Raval in the rooms of an old shoemaker’s shop. It’s spaces are on a human-scale and are characterized by a family atmosphere with something antique. Some of the festival dates have taken place here, such as the video-art performance of the Colombian Liz K. Peñuela and the video projection of the dancing company of Barcelona Erre que Erre .

Interesting also Saldestar , lively “confluence space” in the bohemian district of Gràcia, open to “travellers, friends and supporters”, that for three nights has projected in its show window la video selection Escaparate High & Low Tech , for the audience that passed by in the street or that, expressly arrived, sat down on the pavement opposite the place. In the area also the selection Monográficos y Temáticos has been projected, seen also on other dates in the Galería dels Àngels .

The Coldreation instead hosted, for the whole festival, the videos of Xavier Gavin , who has personally opened the exposition with the performance Be Lie Ve, where he uses physical and psychological pain for his philosophical explorations (and also the audience is obliged do the same, if it is minimally impressionable, because he is hung to the ceiling by means of hooks directly inserted in his back.

Also Miscelänea is a sprightly gallery born in the Raval district, two steps from the marvellous Palau Güell made by Gaudì. Here the projection of the Programma Fluxus, from 16th to 21st of May, has been opened by the performance of Bartolomé Ferrando , that has brought a piece of poetical audiovisual experimentalism, a tribute to the Fluxus tendency and a really refined representation of “visual music”, during which he “played” a watering-pot full of flour drawing fading pictures in the air.

Another tribute to the most important representative of the video area of Fluxus, the Korean Nam June Paik, recently disappeared, was represented by a special at the mediatheque of Caixa Forum and a three day conference at the Casa Asia , in the beautiful building Baró de Quadras, on the smart Avinguda Diagonal.

Indeed the OFF LOOP has occupied different spaces during its rich programme, also in some areas of the most important institutional centres.

The CCCB , for example, where La Mekanika took care from the 16 th to the 18 th of May of Rendez-vous, different projections of excellent contemporary video-dance. In between these projections the most important were: some shorts on the experiences of dance and theatre companies born in difficult countries (such as the Arabian world or the Black Africa); the documentary about the ideation and realization of the living sculpture that the Portuguese choreographer, Vera Matero, and the artist Ruy Chaves have proposed in the Biennale of Arts in Sao Paulo (Brazil) in 2004; the study on the slowness and elasticity of the French choreographer, Myriam Gourfink, surrounded by the excellent music of Kasper Toeplitz and, above all the masterpiece movie of Vicent Pluss “The Moebius Strip” (2001) , realized upon the homonymous choreography written by Gilles Jobin with music by Franz Treichler and award-winning at the International Dance Film and Video Festival of Munich “Dance Screen 2002” , at the Art Cinema Festival of Bergamo and at the On Camera Festival of New York (2004). It was a pity that because of the afternoon hours in working days the affluence was scarce, indeed the quality of the selection would have deserved much more.

At the CCCB some thematical night projections have been realized, among which you could see the one dedicated to the local producer houses. In between these the most important noticeable work was by Goalstudio . For the festival audience the entrance to the exhibition Erice-Kiarostami/Correspondencias was free.

At the Italian Institute of Culture the selection Videominuto was projected. Except for the videos of Hey Presto , of the unerring Austrian Timo Novotny and of the Italian duo Milycon/EN (composed of Daniela Cattivelli and Lino Greco), the others have achieved a better effect with the lucky ones that have run into the random projections in the underground net. Regarding Timo Novotny, in the rooms of the KBB (Kültur Büro of Barcellona), until the 24 th of June, his work will be projected, once again result of the lucky connection with the Sofa Surfers, Life in loops: A Megacities rmx de Timo Novotny .

This is not the only exhibition that will go on longer than the Festival. Also in the rooms of La Capella , municipal expository space linked to the Palau de la Virreina and to the Institut de Cultura, the show Berlintendenzen and the projection of videos about Alexanderplatz of Berlin coming from Trasmediale will continue till the 23 rd of July.

In the end, the calendar was crowded, much more than it is told here, often the main characters of the festival were the ones who opened the exhibitions, with performances or stories about their job, while the exhibitions overlapped, started and finished just like a score, allowing those who had time to follow the more they could.

In the rooms of the civic centre Pati Llimona, in the fascinating gothic district, the French group Ultralab presented personally their experimental video {366 Days}, interesting but made dull by the many images taken from the videogame Unreal Tournament .

Marcel.lì Antuñez should have made his exhibition at the Paloma, famous dance hall always in Raval district, Saturday the 20 th night, with his “Meccatronic Conference” Transpermia , together with the group Moonbootica. The appointment has been delayed to the 21 st of July because of some problems. In the end a certain attention has been paid to the affirmed show of Vjing. The whole night of 12 th of May, at Maumau, a small place in Poble Sec district, has been dedicated to a ping pong of VJs among whom you could see BH Project , Offnoll and the group Pixelbirds . Instead in the rooms of Niu Audiovisual, cultural space recently opened in the ex-industrial district of Poble Nou, the night of Saturday 20 th the DVD VJBR#1- Visual Jockey do Brasil has been presented.

All this took life under the careful eye of the young and passionate coordinator Alex Brahim , and without any entrance ticket, except for really rare cases in which the price was however accessible.