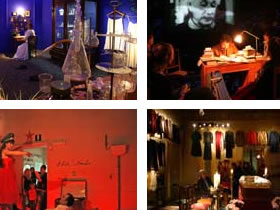 Lots of people thinks he is not so nice, and they are probably right. He is a snob, too self conscious, with a huge ego, and by the way he is anglosaxon, with all the bad habits this mean. Loving him or hating him, once again and underneath it all, we are talking about Peter Greenaway. It is hard to resist to the provocations of his Welsh man, working for years on the huge multimedial project Tulse Luper.

Three movies, a book, a web site, and last February a vj performance at the STRP festival in Eindhoven , and Greenaway is bringing Luper to Neaples.

At Roccella Palace, also known as Pan (Neaples palace of art), from April 1 st to May 8 th , there is the multimedial work The Children of Uranium, directed by Saskia Boddeke, Greenaway’s wife, and with Andrea Liberovici’s musics. The show, presented at Genoa ‘s Science Festival, was created for the 3 anniversary of 2005: 100 years since Einstein’s relativity law, 50 years since his death, and 60 years since Hiroshima ‘s Bomb.

This work make people think about the importance of science and of is protagonists into the last century, after the discovery of atomic physic and nuclear fixation. The show, where it is easy to find Greenaway’s hand, mix technologies and ambientations together with bitter sense of humor, and a story with lots of different point of view and solutions. Numerology, linguistic tricks, hidden meanings, these are the real protagonists of the show.

Just like Tulse Luper, the common aspect is the number 92, the number of the element Uranium, connecting story, facts and relations of the 8 characters of the 8 installations. The table of elements, that after uranium wasn’t anymore the symbol of a safe world, become the playground of the characters, moved in and from the scene by the theme of nuclear, abuse and fear of it. A journey through the discoveries, paradoxes, in a one way street that also nowadays could be a scary scenary, like Ahmadinejad brings to our mind a politic of self distruction.

Isaac Newton, Joseph Smith, Madame Curie, Albert Einstein, Oppenheimer, Kruciov, Gorbaciov and George Bush are the protagonists, connected by the element of uranium. As Greenaway said, we are all children of uranium, and the director push the audience into a labyrinth full of symbols, symmetries, talking objects, just like they were elements of a huge rebus, that the audience should be able to solve.

Each viewer is into the action, that moves from an ambient to the other. Into the net built by the characters, talking to each other, fighting, or just repeating their monologue, the audience is a passive and invisible character.

It is not difficult to ask ourselves “Why am I here?”, while looking at Gorbaciov talking to the body of his dead wife Raissa, or while Bush is playing a lonely shangay with his pencils. In Greenaway’s vision, the audience is like a puppet, able only to see what other men have decided.