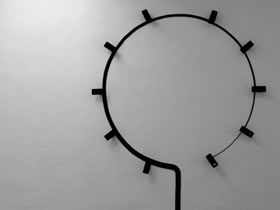 The solo show of Chiristina Kubisch in Turin is an important occasion to approach the work of one of the undoubted reference points in the field of visual art connected to audio. And silence on the corners , the solo show of the German artist, was housed in the e/static Gallery (Digimag#11) from the 1st of April to the 13th of May.

Meeting Chiristina Kubisch, during the opening of her show, has given me the chance to understand that, behind her intense work of research, there is a person who appears, at first, extremely simple and friendly and whose willingness to explain me her work and whose attempt to introduce me to the superior concepts of pure aesthetics were an interesting occasion for reflection.

The light: a daily source it is given little or superficial attention to. What would it happen if each one of us stopped to observe the mutable poetics of light? Chiristina Kubisch managed to seize it, turn it into the main character of many of her recent works. A clean and minimal art, which, with its spontaneity, manages to bring nature within the artistic process, making it evident to the spectator what sometimes such evident isn’t.

Ten solar cells, outside the gallery, catch the light. As the artist underlines, the luminous energy, under different forms and features, is always present. The panels catch the intensity of an afternoon light of a sunny day, rarefaction in a grey day and variability in the twilight. Significant fluctuations going beyond the division sun/clouds.

Cells seem to ask light to reveal itself within the gallery, to become evident and sincere. Her skill in materialising a natural phenomenon as simple as it is wonderful is probably one of the most striking aspects for the spectator.

The light stolen from the cells is transferred into a series of electronic circuits able to transform the signal, generated externally, in an audio signal. The possibility of controlling, through computers, some musical parameters able to make the final result even more astonishing. Chiristina Kubisch creates a technological bridge between the hidden phenomenal reality and the artistic reality. A reality at times made”cold” by an approach too much technical and devoid of feeling.

A circle: simple and with the refinement peculiar to simplicity, feature of her whole production. Ten open speakers, each one of them connected to electronic circuits. At first sight, the work reminds you of a clock which, instead of beating time in 24 hours through 12 points, breaks the rules dividing it only in 10 points. A clock reflecting faithfully the passage from day to night. But her original idea, maybe, wasn’t this one; the sounds of a typical grey sky of Turin, awakes me from this mind call, short and acute sounds, barely audible, able to change of intensity and presence in a sunny day.

A second work devoted to silence was housed in the gallery. A series of Plexiglas panels with white sentences about silence arranged on an e/static wall. The shadow is projected through the light and thanks to the distance between the slabs and the spotless wall. Chiristina Kubisch’s message is disclosed. A further confirmation of how refinement and effectiveness differ from complexity.

All works characterised by fascinating completeness and maturity, with a natural ability to strike and surprise. Chiristina Kubisch manages, once again, to obtain a limpid art, different from schematisation and repetitiveness.