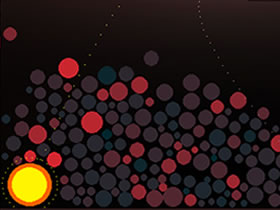 Let’s start from the beginning: The Dumpster is an online project born on Valentine’s day, visualizing with a cool design (Processing), a huge number of data, collected from blogs and related to people, usually teens, dumped in a romantic affair.

Its author is Golan Levin, that created and realized the project together with Kamal Nigam and Jonathan Feinberg, two high level programmers (Nigam works for Intelliseek and Google, Feinberg for IBM). Together with a text by Lev Manovich, The Dumpster is supported by Intellieseek, and it is the the fisrt project of a join venture between Whitney Museum and Tate Online, that will brought two other works (The battle of Algiers by Marc Lafia and Fang Yu lin, and Screening circle by Andy Deck). The Dumpster can be analysed not only in its contents but also as a real phenomenon. There are different levels of access to a really huge number of data: almost 20.000 romance interrupted, told on blogs and that took place in 2005.

In the central area 200 bubbles are floating, coloured from dark blue to red. When we click on one of these, it become yellow, while on the right appears tha text and next the shining bubble, containing similar stories. The left bar shows, as shining points, all the content of the database, showing us tha position of the one we choose. Below, a timeline point out the day of the broke up, and the number of broke ups of the same period.

Social data browser, as said Manovich, allow a 3d searching, and this is a huge news . Manovich said also that the project, described as a collective image upgraded to data mining and database, is a point in common between traditional novel and sociological analysis, between Tolstoj and Durkheim.

In my opinion, I don’t like so much the idea that these data, full of humanity, are seen in a white cold browser, that seem so far from its contents, that social analysis and sociological research behind the project created a database full of stereotypes about love and that there is no referring to the original person, so that it is impossible to follow the life of the blogger, as it would be possible just adding a link.

n other words, it seems to me that materials deserve a warmer and more human treatment, and that the novel style isn’t so well developed. The image is missing a face, and also some humanity, Maybe it is not Levin’s mistake. Maybe it is just too soon and new media have to conquer the complexity so that it will be possible to reach the aim of this project.

Moreover, I said something about the phenomenon: The Dumpster is a perfect example of the media art. It is a complex project, with a long period of elaboration and two important structures like Intelliseek and Blogpulse; esthetically very classy, it is together astract but very simple, perfect for a big audience: nothing is naïve, like the DIY approach that was a important aspect of the net sperimentation.

It is an interesting mainstream project, with good and bad aspects. There are no critics, just the punctualisation of a phenomenon. This project deserve to be read, as a various and hilarious anthology of bitter love in the days of Internet. Example? “ok me and my girfriend recently broke up ya see I think it was cuz we have different signs see im a sagitariuos she was a whore tune in for next weeks”.