The Softspace Of Usman Haque. Choreographies Of Sensations 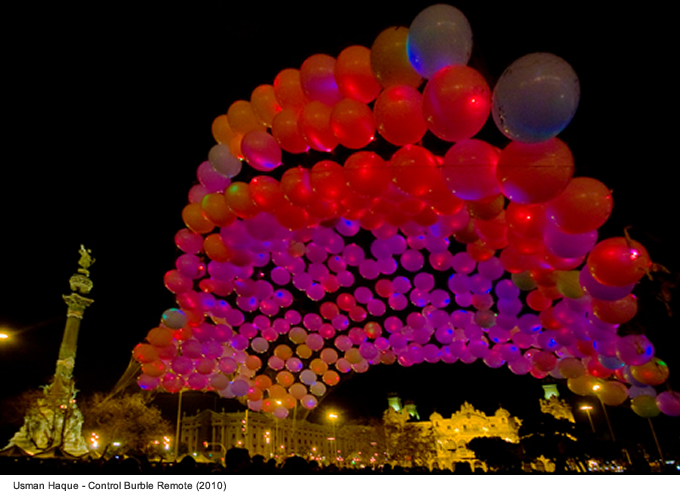 Architecture, according to Vitruvius, is the sum of three factors: utilitas, venustas and firmitas. Usefulness and beauty are for sure features that cannot be renounced in order not to cross the border into sculpture or into the simple and unfortunately rampant building industry. But what about  permanence? Is it truly something that cannot be renounced ?  Is it truly a must that an architectural work has necessarily to be solid and lasting over time ?

When, on the contrary, a work is ephemeral, short-lived ,  transient cannot  belong anymore to the domain of architecture ? And if the term “ephemeral” rather than bearing the negative connotation of  something fragile and subject to speculation, could instead carry a different meaning?

A possible response to these questions has been provided by Usman Haque, an architect and artist leading an interesting research group based in UK. Born in UK but of Pakistani origin, from the paternal side, Usman had the venture of being raised across two different cultures and also due to this, he was able to develop a personal point of view in the crack between the most technologically advanced societies and those still mostly linked to traditional values. . A point of view that has found new additional feeding elements from multiple experiences that Usman  lived around the world and particularly in his Japanese years.  .

Everything began when, still very young, Usman started by observing the way of living the space of  his Asian family  and the way that social relationships were intertwined with the space.. While getting older and studying he entered the communication society and, as everybody did sooner or later,  he found himself engaged wit his cell-phone in a dowsing chase  to the signal. 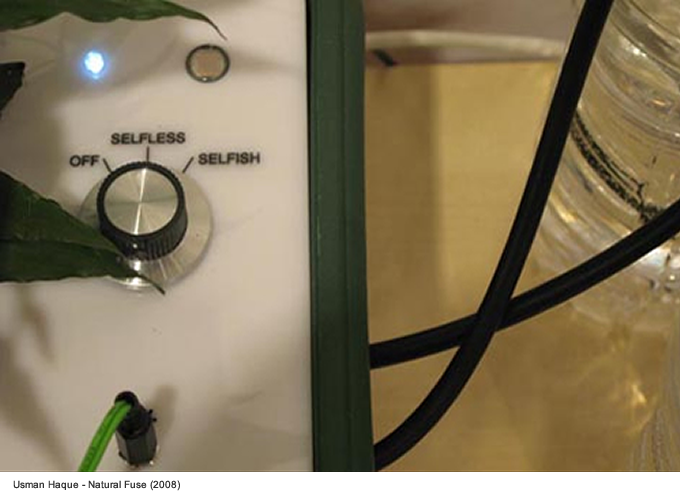 So it happened that it became increasingly solid in his mind the idea that opposite to the hardspace there is a fluid reality, an array of dynamic elements like sounds, smells, ventilation, temperatures which contribute, as much as if not even more than the hardspace, to create the experience of a building, of a flat , of a space. Also part of this softspace is an invisible map overlaid on the visible one. It is made of electromagnetic fields and radio-waves

Usman explains his concept of architecture by using IT metaphors. Walls, floors and roofs are the hardware. The fluid reality previously mentioned, linked to the social infrastructures is the software. In this framework, architecture becomes an operating system offering a working environment that everybody should be entitled to personalize and within which should be allowed to create his own programs. Obviously, everything must be made through open codes so that everybody could introduce modifications without jeopardizing the integrity of the collective work. The key concept is interactivity exactly as in the IT systems , allowing people to become interpreters and designers of their own space,

Here it is where the concept of ephemeral gets a positive and realistic connotation: architecture is not in fact something immobile and unmodifiable but something that can be adapted to   the ones who live it, to the uses they make of it, and to the dynamics originated from it which are ever changing by definition.

Usman in the meanwhile teaches in various prestigious schools, so getting the possibility of realizing projects and meeting many people with whom to exchange ideas and opinions, a value certainly not to be denied by somebody profoundly believing in relationships and interactivity. All his projects are well documented on his web-site, with descriptions, photos and videos. 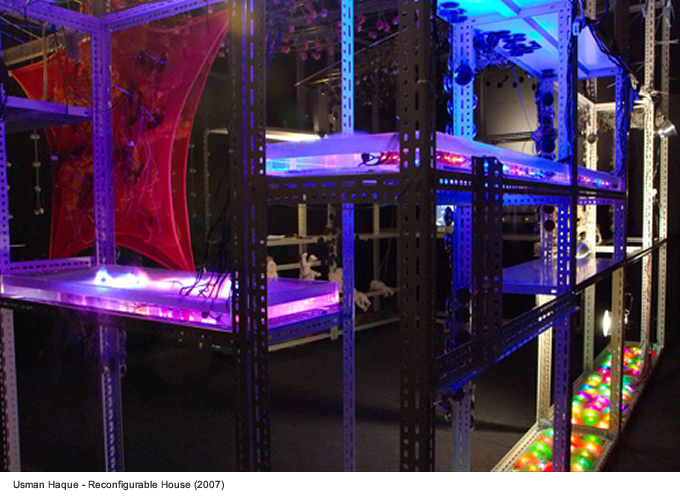 Out of them we are citing here only a few. Like the Reconfigurable House (firstly presented in Japan and then in Belgium in 2008), the reconstruction of an intelligent house which instead of hiding the technology for avoiding its tampering makes it totally accessible to inhabitants so that they can personalize its behaviour as wished. Or Natural Fuse a system inviting to energy saving by carrying the CO2 emissions into a network of plants showing its effects by growing or dying.

Or also Primal Fuse a spectacular aurora borealis artificially made on the beach of Santa Monica in 2008 on a screen of steam reactive to the music or to the screams of participants. Or still Sky Ear , a cloud of balloons full of helium becoming the portrayal of the hertzian space reacting to the call of cell phones of participants.

Based on the same use of personalized electronics and coloured LEDs inside balloons is the Burble project which is however conceptually and technically apart from Sky Ear and was slightly re-adapted each time in the different locations where it was realized. From the Singapour Biennial in 2006 to the London Fashion Week in 2007, to the opening ceremony of  the Dubai World Cup in 2009, to the Phish Festival in Vermont in 2009. And lastly in  Barcellona on February 27,  2010, for the most beautiful exhibition of Cultures of Canvi organised by the Centre d’Arts Santa Mònica by Josep Perelló and Pau Alsina.

For that event Usman Haque came to the capital of Cataluna accompanied  by some members of his study and some collaborators. Also on the first day of the Santa Monica performance he organised a series of family labs and he convened a group of fifteen volunteers helping him in assembling and disassembling the Burble project structure slightly modified on the occasion and renamed Control Burble Remote. They were to remain in the public to explain the performance and for safety reasons.

On trhe morning of February 27th we split in two groups: one taking care of the electric circuits at San Monica (connecting batteries  to cards, checking their functioning, making small modifications if needed and lastly inserting them inside the balloons) and the other of the network constituting the backbone of the structure (laying it down on the performance’s place and preparing it for the insertion in the balloons)).

With the help of the Hague team the volunteers spent their afternoon on inflating their balloons using helium cylinders and inserting them in predefined places between the two layers of the net. They then took care  of fastening the electronic components to the net in order to avoid their accidental chute on the public in the not infrequent case of a balloon exploding during the performance. 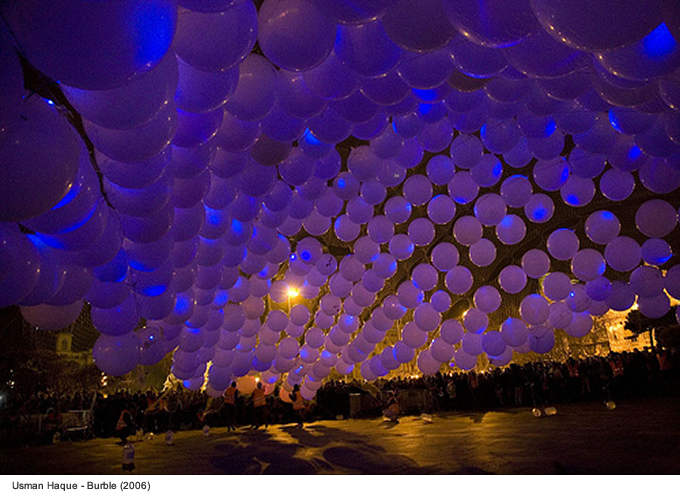 Working side to side with Usman, even if only as unskilled workers, means testing on his own skin the signification of softspace, becoming part of a structure planning group , seeing it growing while contributing to its development, interacting with it and feeling the sensations given by a collective creation experience. Exactly as for the installation, the volunteers were part of a single body working for the same single objective . But the peculiarities of each person spread out like bushfire through the  neighbours handling the cylinders. Overall, a technical and artistic experience but also a profoundly human one.

The public participating to the performance, as it was required, came in equipped with all sorts of remote control devices from the one for TV to the Hi-Fi one, from that for the desktop to the one for a remote-control machine. “Intimate” devices as defined by Usman Haque, meant for the privacy of your own house starting from bedtime when one closes the exterior-facing doors. And exactly here lies the idea of  Control Burble Remote a device which allows you to drive something which gives some feedback exclusively to you, while allowing you to interact with something external, public so becoming an instrument for a collective action..

And at this point in time it became visually evident what was not visible but still existed. The remote control activated on the balloon to which it was targeteted  a modality of colour/intermittence which was specific among the pre-programmed ones.  On its turn the balloon communicated through an infrared sensing device to a neighbour balloon the same command.

All the balloons became therefore a giant canvas on which one could do distant painting without having a unique and total control of the brushstroke as  others were doing the same at the same time and because the different balloons were talking each other contagiously spreading  the selected modality. When the public had already mostly left and it was time for disassembling, the painting effect,, while interacting alone with the structure, was pretty evident. 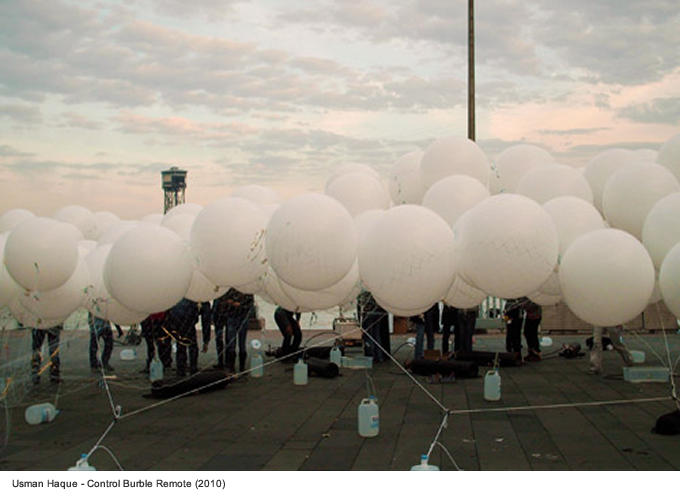 The weak point of Control Burble Remote in Barcellona was the lighting system of the place. Out of the many streetlights of the zone on the seashore up to the Ramblas too few were turned off and a giant moon reflecting on the surface of the sea made the rest. By all means a deeper obscurity would have made the colours choreography more spectacular and more visible into distance.

But despite this problem, the presence of Usman and his architectural ideas should have suggested some profound reasons for reflection to a city famous for its beauty when seen from outside but which mostly obliges its citizens confined in cramped spaces, rather often without ventilation and natural light. This, despite the lesson of Gaudi  who was so attentive to the ergonomics of the housing spaces and to their  environmental impact.

At a time when also the architecture is undergoing a critical revision, in which the  need of retrieving its sustainability becomes more pressing as well as the need for integrating the technology in an intelligent and useful  way, Usman Haque makes its voice resounding and makes use of his art showing what is invisible but still exists, reminding us that despite the estrangement caused the urban realities, the presence of each of us is influencing that of our neighbours and this reciprocal invasion of spaces can be turned into a point of strength.