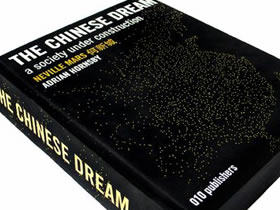 The Chinese Dream is book of more than 700 pages about the urbanization in China, published by the Dutch editor NAI Publishers. This project of colossal dimensions is on the shoulders of an architect Neville Mars, and a researcher Adrian Hornsby and the Dynamic City Foundation. The disproportionate growth of the agglomerations in China is at the centre of this publication.

The Chinese Dream is a story, a newspaper, a critic, an instant, the arrival point of a field research, an editorial project based on the graphic communication of jamming culture, and on-line and shared publication in progress ( http://burb.tv ), the relation of an architectural project in the urban context of Beijing, the visual output of a years of observation and documentation of the territory.

Not always easy to read (the graphics of the page-layout, which is integrating to the contents of the editorial project, is usually invasive with respect to the text) but certainly immersive, The Chinese Dream is a pitiless participated and intriguing analysis, of the New World of 21 st century, published by the publishing house in Rotterdam by concomitance with the celebrations of the Beijing Olympics (June 2008). As the authors rightfully point out in the post-script, the things change very fast in China as if they could been frozen by the ink. The news of the last months already seem to confirm this departure point. Towards the beginning of the February 2009, the companies of the whole world claimed ”Crisis. China: 20 million of people loose their job and return to countryside” some weeks before there came the countermand ”Economic recovery in China, workers return to cities.”

A volume, which talks of the evolution of the urbanism in China, therefore cannot analyse and present a phase of a route, which is destined to change immediately. “This book has become old-dates soon as it was published and rapidly became an historic instant rather than an analysis of the present.” as warned by the authors. “The understanding of the Chinese policy implies the reading of the 9290 articles which Google News publishes only in the last 3,8 days  The world continues to move in order to remain useful, our interpretation has to be continuously reviewed” And just for this reason, the platform of the Burb.tv contains continuous updates and editorial materials and documentation which complete the volume.

The subtitle of the volume, A society in construction seems to be perfectly in tune with the Chinese reality in continuous update, which seems to represent its natural expansion. While the urban China seems actually as a project without defined borders, but developed constantly and rapidly following the flux of the economy, the book itself presents the (even the historic) premises of this development, outlines some principals, yet will never be able to reach to the state of the things, an arrival point which is not arbitrary, fragmentary and temporary.

And actually, the entire research project initiated in 2004 from Neville Mars and from the Dynamic City Foundation, dedicated to Urban China 2020 (the back-cover of the book asks with enormous characters just this question ^2020 what will China be like?^) just aims to analyse the disproportionate urban growth of the country until the first twenty-years of the new millennium. The selected date is not casual: the Chinese government had in fact announced its intention to build 400 new cities right in this period. Twenty nine cities each year, in order to cope with the immense migration of the population searching a job from rural toward the cities. According to the statistical researches, in 2030 a good 930 million Chinese people will live in city.

The question, which underlies the entire editorial project, aims to be imaginary rather than a scientific data: given the premises, how will the future be? On one hand the volume presents images (7000 as told by authors) market researches, sociological texts of urbanisation in China, graphics and stories: all summed up, it’s the real product of a careful on-site research, realized by Chinese and international researchers together.

But Neville Mars above all is a designer architect: From his privileged point of view, in the heart of Far West Chinese (in fact he lives in Beijing), also tries to understand and imagine how “designing” can have a role in this constructive proliferation which doesn’t have the time to think and plan in the long term.

Comes to be defined as ” Flash Architecture” , for which a small fraction of time is dedicated instead of what would be dedicated in Europe or in the United States. The architects are called to solve the urban problems or expansion plans which will be put in operation very rapidly. Very often the development plans prove to be inefficient, uncontrolled and uncoordinated.

The growth of the Chinese economy, which used to go on the average levels which decuplicated the values of the western world until some years ago, together with the political power, which China has been awarded in the last decades in the international context, are the elements which initiated a process of transformation of the physical, urban and social landscape of the country. Satellite city, demolished and completely remodelled old-districts in order to contain billions of inhabitants, commercial centres, and roads: which is defined “sprawl”, uncontrolled extension of the urban fabric.

What role does the vision of the architect have in this context? The turning into a cement jungle of China has attracted hundreds of architects from the entire world, which don’t have too much left to do in the west. Neville Mars asks a question with a difficult answer: What behaviour should an architect attain in front this state of things? There exists an ethic according to which, one can design social environments for the society without having to satisfy the brutal necessities of the market?

And here’s BBT (Beijing Boom Tower), the imaginary district of the city of Beijing signed by Neville Mars, and presented in the heart of the book, the reification of the problem. The real absence of the Chinese dream, BBT will contain 12500 people, 5000 apartments, 6 hectares of land for an area whose density will be ten times of that of Manhattan. Towers for apartments with commercial areas on the base, highway which surrounds them, a green area next to it (view reserved to richer clients): Seems to be the materialization of Condominium of J.G. Ballard or the 3D version of the “ideal cities” designed in the 1930’ies by Le Corbousier (by chance they haven’t been realized), counter to which there raised the critics of Lefebre and the international situationist practice.

“BBT is the theoretical product of a trial, genuinely marketable to contain the demands of the market: the suburban luxury in the centre of a city. In BBT you can have your desert and eat It.” says the presentation of the district. Now the trend in China is to construct luxurious houses with green areas, two steps to metro, apartments whose dimensions equal to 200% of the average: What limits have to be crossed to contain the market? In order to do all that, is it legal to construct “vertical districts” (60 storey high) social classes divided according to height? Seems like a nightmare rather than a desert, and whoever plans the urban evolution of the Chinese far west, has to answer to the ethical problems.