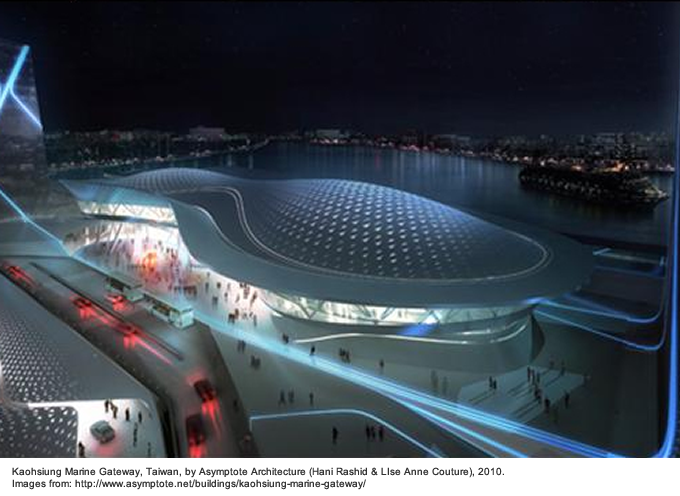 It is through an in-depth study of drawing and particularly, of its types developed in the context of architectural design, that the origins of the word ‘operative’ can be defined and its contemporary meaning may be expanded. Tracing is the primary and fundamental form of drawing. This type of drawing can be also termed indexical imprint, that is, a visual trail left from a particular process.

As such, tracing is relational, and although it involves physical processes, it expands beyond them, as it is a means of forming propositions that can be abstract. In some cases, such a basic form of drawing still directly or indirectly affects the ‘workings’ of even the most advanced types and processes of diagramming (that it too, derives from drawing), computer-generated animation as well as the status, operation and aspects of the intended end-product itself. 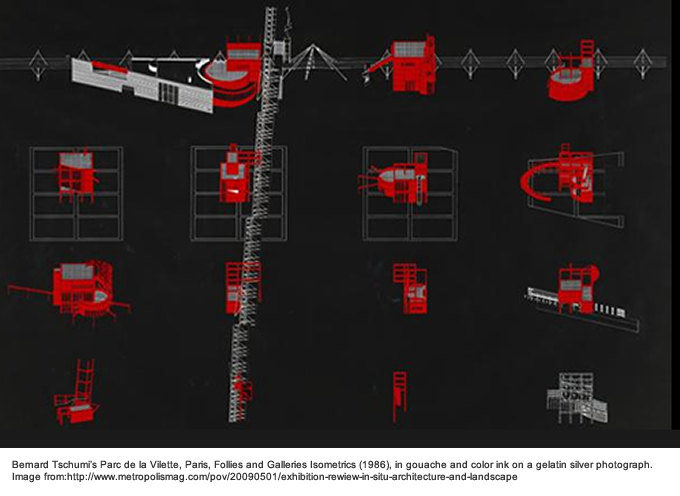 As discussed by Anthony Vidler, diagram can be best defined as a “delineation used to symbolise related abstract propositions or mental processes”. [1] A diagram always involves the purposeful activity of tracing, through which, it ‘un/re-makes’ reality and unlike an architectural plan, it is non-buildable. [2] Nevertheless, in contrast to Anthony Vidler, diagrams are not overtly utopian. [3] A diagram is characterised by a kind of virtuality that, as the architect Greg Lynn explains, contains variable potential. As such, diagram is contrasted to the operations of simulation, because the latter operates rather as a “visual substitute” of reality.

Coined by architect Bernard Tschumi, “operative drawing” may be created in any discipline, through using any medium provided that, it functions as a purposeful activity of critical thinking and positioning. As Tschumi describes: Drawing, whether done by hand or using computer software, can be either descriptive or prescriptive… prescriptive drawings are intended to be operative… They are devices for thinking as well as presenting positions… form is never their objective.. [4]

In particular, based on Tschumi‘s description, operative drawing involves the following categories: “conceptual diagram”, “transcript”, “transformational sequence” and “interchangeable scalar drawing”. In “conceptual diagram” the inherent complexity of architecture may be reduced and conceptualisation is facilitated. Through “transcript” architectural reality can be interpreted, or in other words, ‘read’, often through theoretical and non-realistic scenarios.

“Transformational sequence” includes animation that may be applied not only to forms, but also, to spaces and programmes. Process and end-product are of equal importance. A transformational sequence is ‘open’ if it has no endings, as for example, when it contains concurrent or juxtaposed sequences of another order, and ‘closed’ when it has a predictable end due to the exhaustion, circularity or repetition of process. Finally, the “interchangeable scalar drawing” is essentially, the combination of all the aforementioned categories into a “singular heterogeneous transformational concept” [5]

In opposition to what Tschumi defines as a “descriptive” kind of drawing (in an either subjective or objective sense), operative drawing occurs between its visual manifestations because it is a propositional non-pictorial and a process-based, non-formal activity and a field of potentiality that unfolds in time. Operative drawing is a strategy of thinking-in-progress that cuts through the stages of the creation process that may include intention, realisation, evaluation etc. and diverse fields, such as, architecture, psychology, philosophy, perception and others. 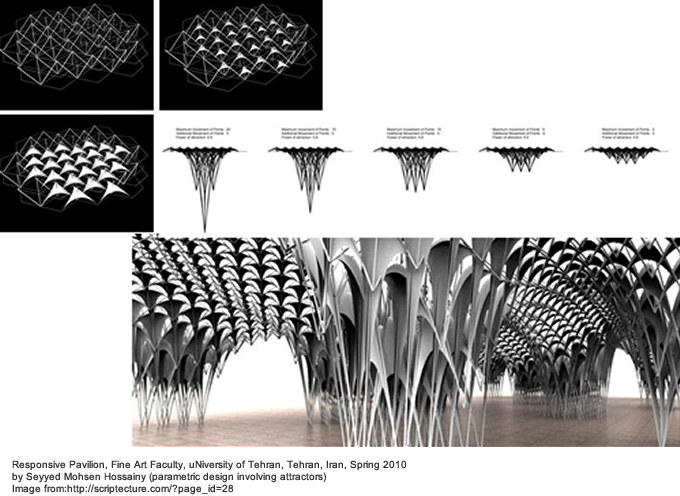 Attempting to fully map the categories of computer-generated animation, poses as a rather impossible task, as they continuously evolve and involve various heterogeneous processes. Animation categories can be, more or less, defined in relation to the types of computer-generated modelling.The basic groups of tools that are used for modelling built architecture include volume-based modelling, surface-based deformators and dynamic systems. Volume-based modelling affects the original interacting solids ‘globally’, while surface-based tools deform the individual geometrical elements of a digital 3D model.

The basic type of animation is key-framed animation. This type of animation enables the presentation of the successive transformations of solids. Each transformation and its effects on other solids can be easily deciphered. Consequently, those animations can be thoroughly analysed and any ‘causal’ relationships can be identified. Dynamic systems are used in architecture primarily for enabling non-linear modelling that includes self-evolving forms and interactive designs. Dynamic systems have a variety of applications including the simulation of real-world environments, the visualisation of changing and interacting environmental and statistical data etc. 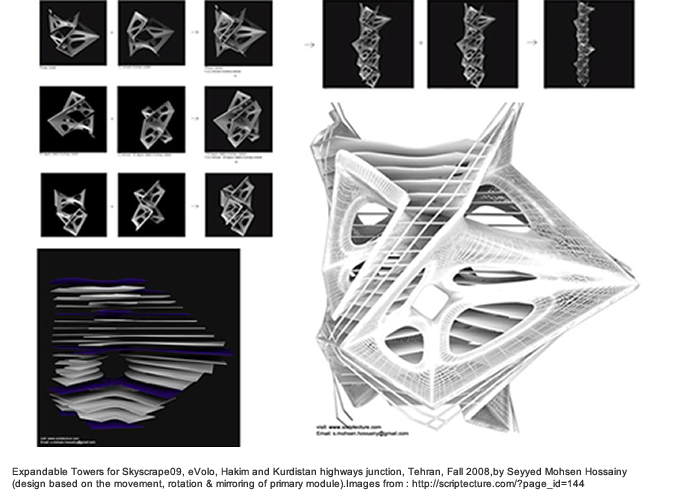 The elements of the resulting dynamic animations may have complex and synchronous interactions with each other, automated by programmable constraints. As can be seen in Eric Bucci, Fernando Burgos and Kuk-Hwan Mieussett, those tools are coupled with ‘genetic algorithms’ for enabling the creation of interactive designs of built spaces and urban designs in architecture. As those architects explain, such designs are self-evolving and generated from the data that has been collected either online or directly from the physical world. [7] These complex programmable tools are suitable for creating highly irregular or fragmented surfaces that are self-evolving.

As a transformational sequence, animation tends to be arbitrarily additive, as an effect may derive from multiple causes. In fact, digital transformational sequences can be almost inexhaustibly additive, as the number of causes that can be added may be infinite. According to the architect Ali Rahim however only key-framed animation may be characterised as being causal i.e. determinate, reversible and metaphorical, as opposed to the “high-end” animation which is non-linear and “endogenic”.[8] High-end animation enables not only the direct, but also, the indirect complex morphing and a multitude of concurrent transformations. High-end animation may also involve real-world data.

In a transformational sequence, the qualities of transition between its ‘frames’ or, in other words, its instances, is of major significance. As Tschumi describes: All sequences are cumulative. Their “frames” derive significance from juxtaposition. They establish memory – of the preceding frame, of the cause of events. To experience and to follow an architectural sequence is to reflect upon events in order to place them into successive wholes [9] 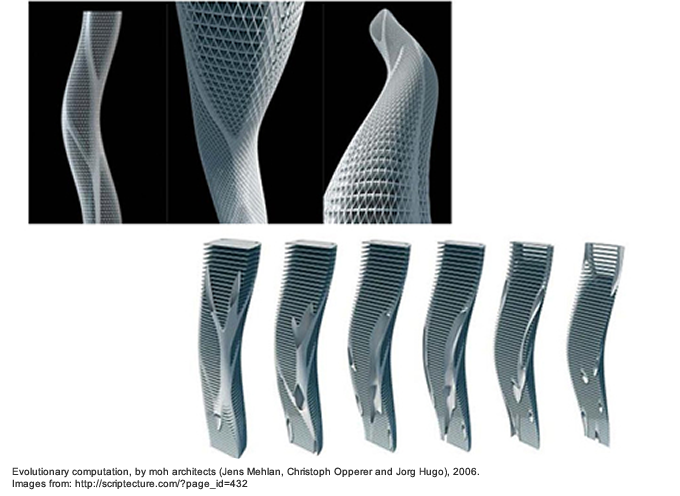 Tschumi proposes that this deceptive continuity between cause and effect, which is achieved through the use of juxtaposed frames, can be ‘broken’ by using superimposed frames as when introducing the cinematic element of montage. According to Tschumi, the superimposition of disparate frames is expected to reveal the irreducible contradictions occurring between the stages of the architectural transformation.

Such a superimposition may result in “ruptures” through which, the architect’s underlying, conflicting but evolving decision-making, can be exposed.[10] Inevitably however, montage functions rather as a transition between two disparate transformational stages or as the means of linking various transformational sequences through their superimposition. Montage seems to operate in both cases as an inter-connective device, yielding a compositionally (re)structured animation as a self-contained virtual sequence. Instead of a design tool, montage proposes another editing technique for animated architectural previews.

On a more analytical level, the workings of a hand-drawn or digitally generated transformational sequence (that may function as an integral part of a linear production process or presented as an end-product), depend on the qualities of the difference involved in its progressions. According to Henri Lefebvre, despite the fact that an “induced” difference derives from the existence of “opposition”, it does not undermine but “remains within” the system it constitutes. On the other hand, a “produced” difference derives from the existence of “contradiction/ transcendence” because it “presupposes the shattering of a system [and]… it emerges from… chasm”.[11]

It has been argued that animation is usually presented as a singular flow of idealistic creation, isolated from any real material relations, interactions and experiential time. Animation has its roots in cinematic modes of presentation and spectatorship as well as scientific simulation and data visualisation. Architects like Greg Lynn investigate the mutually challenging ‘dialogue’ between animation and architecture and develop methodologies for creatively and systematically adapting animation as a dynamic tool for architectural design, instead of using it simply as a means of previewing static architectural prototypes. Greg Lynn’s work with animation enables a better understanding of the role of animation as an endogenous design tool for architecture. 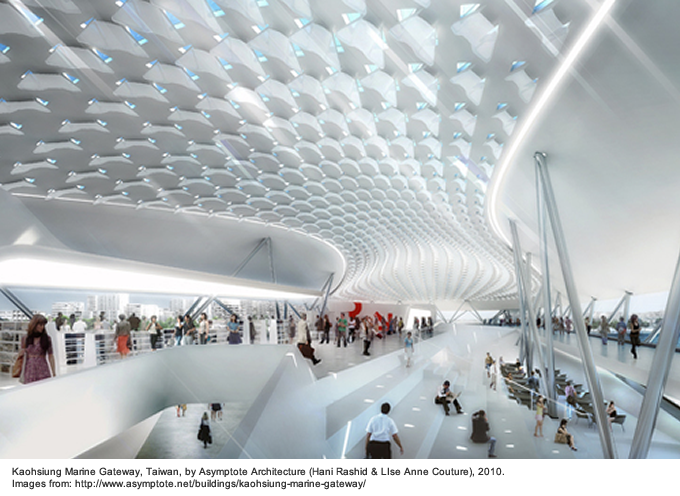 Transformative series may be either “discrete/repetitive” and thus, mathematically predictable (as far as this can be possible), or “continuous/iterative”. The latter do not have “origins” as such, but “points of departure”. [12] Depending on the variables used in an animation, the resulting series may be open, if they have an “indefinitely structured system”. In the second part of this essay, characteristic cases of Lynn’s work are discussed in conjunction with the broader interdisciplinary context, in search of why and how operative transformations can be achieved in architecture.