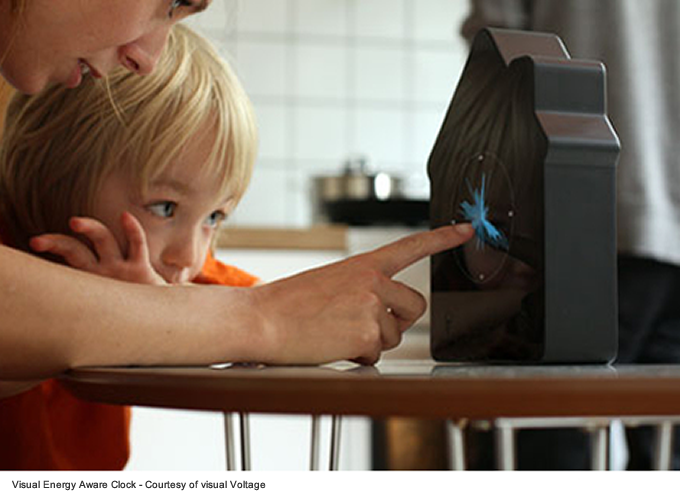 Visual voltage is the travelling exhibition promoted by the Swedish Institute and the Interactive Institute whose Berlin version Visual Voltage Amplified had its opening on last January 7th at the Felleshuset, one of the buildings of Scandinavian Embassies complex in Berlin.. The exhibition, supervised by Susanne Jaschko shows projects, concepts, and experimental works from artists and designers who critically deal with of energy production and consumption in an age of global sensibility to the environmental issues.

Clocks and cables visualising the domestic consumption of electricity, lamps working as dryers, artificial environments fed by the of CO2 meters, are only few of the solutions on show in the Aware Objects section, “conscious” objects, that is objects capable of communicating data about their energy consumption and making their owners aware of their good or bad behaviours as to their environmental sustainability.

The Aware Objects on exhibit at Visual Voltage Amplified make tangible a research perspective highly relevant as to the hot issues impacting on the future. In the exhibition, both art and design converge and contaminate and overlap each other, making to coincide approaches and methods that, albeit already consolidated, lead to innovative results by introducing new technological features. 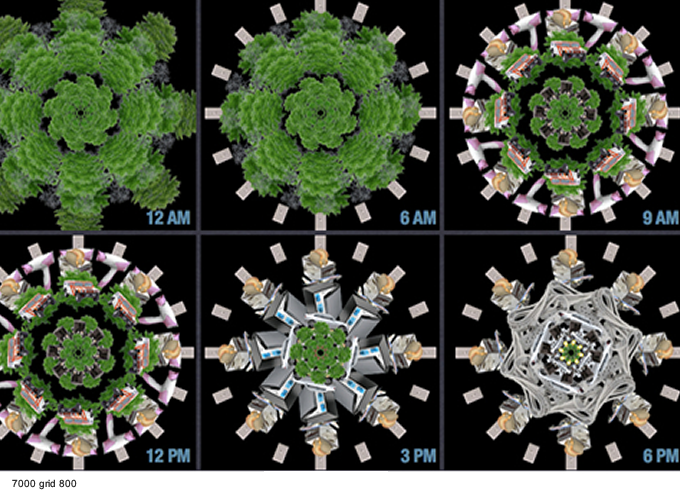 This research approach characterises the interdisciplinary environment called eco-visualization or in other words adoption of art and design techniques in order to confer visibility to otherwise invisible environmental data in order to promote the awareness of energy depletion and environmental pollution through visual feedbacks.

The Eco-Visualization finds its historical roots in the Environmental Art, in the cultural and artistic activism of the ’60s as well as in some collective performances of the ’80s (J. Beuys, 7000 Oaks, 1982). It is based on the convergence of three fields media art, information visualization and affordable design.(1)

Pioneer and theoretician of the eco-visualization is Tiffany Holmes. In 2007 Tiffany Holmes realised 7000 Oaks and counting an animation visualizing in real time the electrical power consumption at the National Center for Supercomputing Applications of the University of Illinois. In 2004 she realised Floating Point, , a web animation visualising in real time the variations in the water oxygen concentration, monitoring therefore the qualitative and quantitative impact of the human pollution on the marine ecosystem.

Originated by the cooperation with research centers dedicated to measuring and monitoring environmental data, the eco-visualization projects are aimed at opening a scientific perspective to a wide audience, spreading the information through artistic visualizations computer-generated, transforming the data into images, lights, colours, abstract graphical elements so communicating intangible values fostering the adoption of sustainable lifestyles. 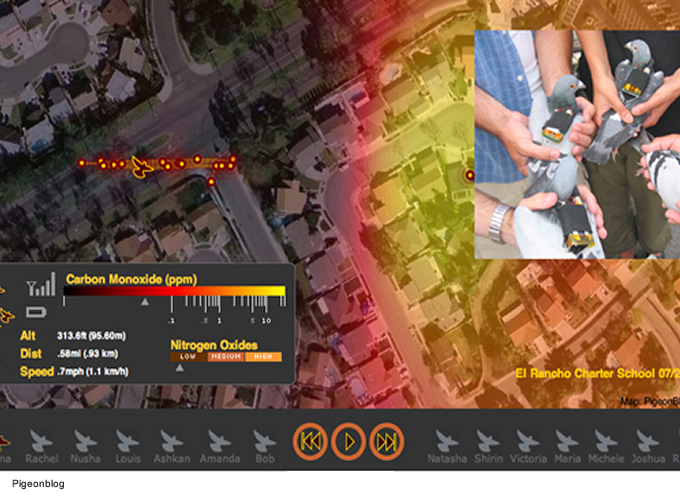 For instance in the Pigeonblog project of Beatriz da Costa, Cina Hazegh e Kevin Ponto, a group of pigeons equipped with sensors, GPS and microcontrollers monitored the CO2 data in Los Angeles skies and sent them to Google maps. Accessing a personalized platform on Google Maps the users could follow the pigeons visualizing the pollution data with their geo-coordinates in real time.

In the same year of Pigeonblog, 2006, the Air – Area’s Immediate Reading experiment was started. People from a Manhattan District were required to monitor the CO2 and ozone levels through wearable devices built by an independent group of researchers ad artists called Preemptive Media.

Analyzing these projects, one notices that the research horizon of the eco-visualization extends to other domains and addresses other questions. If the goal of eco-visualization is that of instilling more consciousness into people and consequently modifying their lifestyles, how much the efficacy of its methods and techniques depend from the actual involvement of the users?

Which are the strategies, systems and technologies to be developed in order to generate the social activism, out of the self-consciousness, so transforming the people from objects of the change into subjects promoting such change ?

Strictly linked to the field of eco-visualization, was then born the concept of Citizen Science, i.e. a new kind of mobile computing in which the cell-phone through the implementation of new sensors is changed from a communication device into a personal instrument for monitoring environmental data and hence a catalyst for the so called Participatory Urbanism (2). 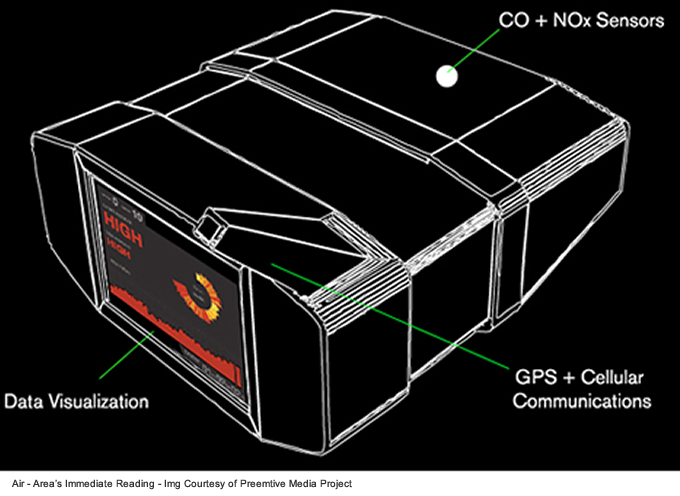 A recent example of citizen science project is CamMobSens (Cambridge Mobile Urban Sensing), developed at the University of Cambridge within the triennial project Environmental Sensing System Across Grid Environments (MESSAGE). The project was providing for the implementation in 2006 of pollution sensors on Nokia mobiles for monitoring the pollution of the Cambridge area. Data and itineraries of the bikers group involved were sent to a webmap through a GPS system.

In 2009 thanks to the evolution of the mobile-sensing technologies the project MESSAGE from an experiment tool became an actually usable system which allowed London citizens monitoring the environmental data of their town through their cell-phones (3).

Eco-visualization, Citizen science, Participatory urbanism and mobile sensing are highlighting this phenomenon: the new technologies, on one side are extending the capabilities of monitoring the invisible data characterizing the living environment around us, be it inside or outside, on the other side they are extending the modalities and solutions for rendering these data through informative visual systems based on very beautiful images generated via techniques and approaches increasingly different from the analytical-scientific ones and closer to those more properly defined as infoaesthetic.

In this phenomenon we wish to outline two aspects. The first one being the cross-contamination between different disciplines, the convergence between art and design and their re-configuration as to the need of formulating questions and issuing answers such to satisfy the expectations of our society in terms of scenarios characterized by climate changes and scarcity of energetic resources. The second one pertaining to the goal of defining new strategies for inducing mankind to behavioural changes in their lifestyles. 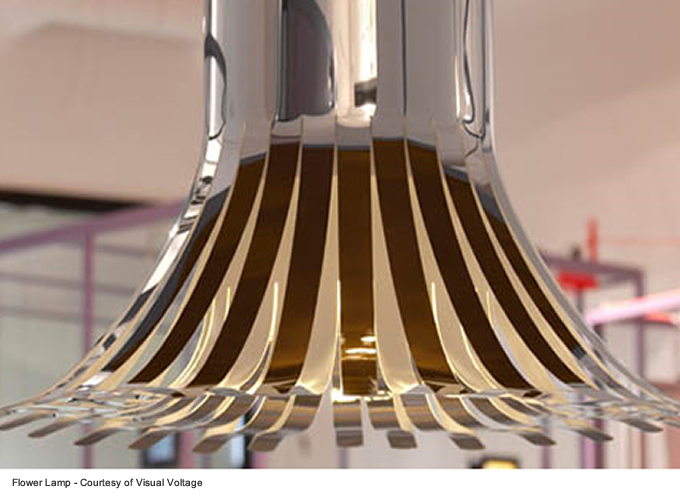 What is worth of mentioning with regard to the second issue is that in all the project aspects both as to arts, design or technology the general framework for generating the behavioural change is based on concepts such as “consciousness acquisition”, ” social activism”, and” agents for change” rather than “persuasion”, “sensitization”, and “passive information users”.