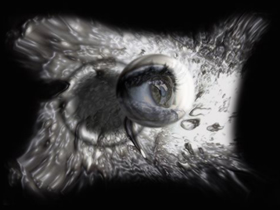 Dynamic and provokative, but also strong and sober. This is the Interfacce style, Roman show about mediated communication languages, this year at its sixth edition.

Photography, video, movie and special effects, electro music, modelling and 3D animation, the Net and man-machine interation are the principal discussed themes. The inauguration was last October at Tor Vergata University of Rome contemporary with the Interaction-day , the first collateral event dedicated to the design in the interation between human beeings and computers. Cospicuos the istitutional participation, but interesting as well the presence of significative social actors that gives a tone to the rassign. Organized by Mifav from Tor Vergata University , with the collaboration of the Rome Conservatory “S. Cecilia”, Interfacce as been a manifestation by the interdisciplinary content, promoted as a model for the promotion of creativity-innovation, basical element of next competitive and soustainable developments in the ICT, cultural industry and Experience-Design sectors and in general in the communication mediated by a machine.

It is not a case that near forums and panels of theory created with traditional settings (?), there’s a full calendar plenty of initiatives. Real occasions of comparison and contact between experts and curious, professionals and managers with the objective to promote the meeting of young, institutions and worlds of information, research and industry, with a new, convincing formula.

The workshops , for example, realized in collaboration with the Master in Advanced Technologies of Interactive Communications , oriented to the production world and the contests to promote the young talents under 36. The proclamation to the participation ends the 15 th of November are found on the manifestation website. Between the other events, the cinema debate called Cinekorto and the exhibition Fotoesordio .

An event that proposes a moment of reflection and redefinition of the rapport/interaction between man and machine, so the rapport between “people” and “places” mediated by the technology, between the scenery and the way to interactive communication. And in general the design of “experiences”. A sort of resonance of the new Renaissance, of whom Interfacce wants to be petition evenkeeping an “alpha release” profile.

Two sides: the first one was about the progress state of the “future vision”. From Knowledge Navigator by Apple, to Minority Report , they get to commercial reifications of Philips Design marked products.

The second about the commercial face of this phenomena . Why didn’t this product penetrate the mass yet after twenty years? Which are the future directions of the experience and interaction design? These seem the most interesting questions. But when the mass could be easily pierced by the videogame, where a more natural situation began recently with Wii by Nintendo , the interaction and experience design in the videogame are more debated in this second panel.

During the exhibition have been presented the books Theories and Practice in Interaction Design by their editor Sebastiano Bagnara and Gillian Crampton Smith , and Information Design by its author Massimo Botta. Medialab and Interaction Day(s )Awards prizes have been handed out, while an exhibition of prototypes realized by the students of mediated communication and IxD was accessible.