“Computable–Incomputable”, the ZKM in the Digital Art Hall

In the ZDF Digital Art Hall visitors move through the virtual ZKM where they can discover computer-generated artworks.

Is the universe a big computer? The question is not new: Konrad Zuse, pioneering computer scientist, described the universe as a large cellular automaton back in 1969. In his opinion it is imaginable as a discrete computational system composed of cells that evolve following pre-set rules by considering the states of other cells in their locality. Cellular automata can compute functions and solve algorithmic problems. Zuse called his hypothesis »calculating space« [Rechnender Raum], and it can model the universe as a combination of many small computers (in this case equivalent to automata) that adds up to one large computer. This exhibition reflects the idea of calculating space, but also Seth Lloyd’s »programmed universe,« which proposes that the universe is one huge quantum computer.

With the development of computation and graphical user interfaces, it turns out not only that reality can be described as a computational system, but that sets of computing »executables« can generate new virtual realities. This capability of computers has fascinated artists, who have been exploring generative aesthetics for half a century to date.

While the computability of environments now seems clear, the question of whether the self can be computed hasn’t been answered in the affirmative, although the promise of artificial intelligence already threatens to reproduce the thinking subject. Despite the fact that current computers are unable to simulate human thought, and so the self as yet remains incomputable, this recognition has functioned as a powerful stimulant for speculative fiction. 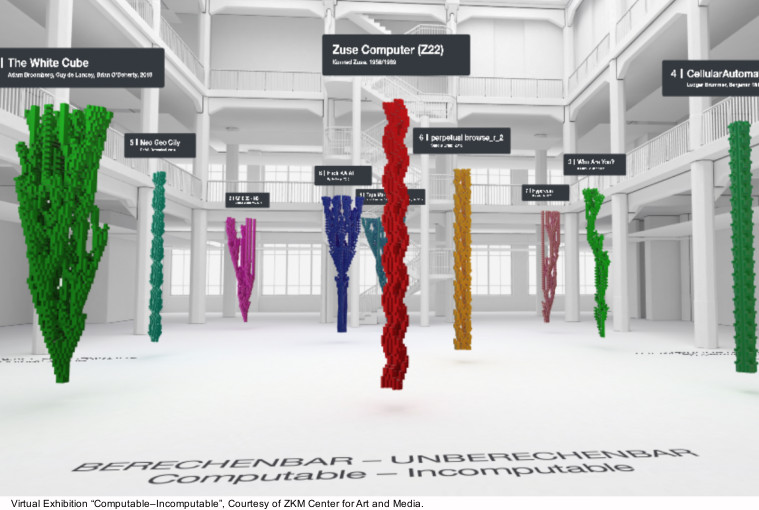 The collection at ZKM | Karlsruhe focuses on media art: an artform defined by the medium with which it is created, distributed, and received. The apparatuses created by computer-related disciplines emerging throughout the second half of the twentieth century—such as automata studies, cybernetics, information and communication technologies, and artificial intelligence—have gradually expanded the definition of media, and made the computer one of the most important tools and media for visual arts.

Computable – Incomputable showcases software-based digital artworks in a computer-generated environment. A digital copy of an atrium at ZKM | Karlsruhe is populated by multiple cellular automata, generated completely algorithmically. The exhibition support structure, just like the artworks it displays, reflects upon its apparatus and medium: the computer.