November 3 + 4 was an unusually hot weekend in the Bay Area, with temperatures in the low 80s (28 degrees Celsius). The Leonardo community gathered together at the Fort Mason campus of the San Francisco Art Institute in San Francisco for its flagship event: The Convening. The weekend was the commemoration of the publisher’s founding.  Leonardo, the international publishing initiative dedicated to art, technology and science has celebrated this anniversary 35 times since 2017, when it launched the first birthday party at ISEA in Caldea, Colombia. Since then, birthday celebrations have included panels, symposia, lectures and exhibitions hosted by major art and science events, and special events collaborated with and presented by institutions with which Leonardo has formed partnerships. A year-long reflection period, the idea for the celebrations was a board decision, introduced by Nina Czegledy. These encounters have provided diverse opportunities for deep listening to understand the goals of Leonardo’s international community nodes around the world and was the basis for The Convening program.

A long-time admirer of Leonardo, I was attracted to this event not only because it featured several influential speakers, it also offered Intersections, an extensive performance program of new talent organized from an open call by CODAME. I was also interested in the interactive format of the two-day event: attendees were expected to participate, to interact with other attendees (especially with those who they did not know). It was not designed to simply sit and listen, and over two days we did participate, often leaving our comfort zone. The venue, a 67,000 sq. foot (6,224.5 sq. meters) warehouse on a dock that extended out, into the San Francisco Bay, now houses studios for 160 SFAI students and faculty. It has 3,300 sq. feet (306.58 sq. meters) of public space, which became the meeting hall, performance and exhibition space for The Convening.

At the San Francisco birthday party, approximately 100 people responded to the call for participation, and came together to provide guidelines for Leonardo to consider for its future: the next fifty years (or not).  Roger Malina, executive editor of Leonardo Publications at MIT Press and son of the founding editor Frank Malina (1912-1981) called The Convening to order with introductory remarks that recounted Leonardo’s unique history.  It all began in 1968 as a journal for writers about artists using science, started by Frank Malina in the family’s Paris kitchen. Produced using offset printing, the small but committed effort has grown to become an international publisher of books and journals; a supporter of art, science and technology projects; and much more. Roger has been the leading spokesperson of the organization since his father’s death, and he admitted openly that he now contemplates the prospect of ending Leonardo. Therefore, he beseeched the attentive audience to consider this possibility, but to also reflect on Leonardo’s successes and determine if Leonardo had reached its goals. The dominant questions: what could Leonardo’s role be 50 years in the future, what language would be used, and what technology would dominate? 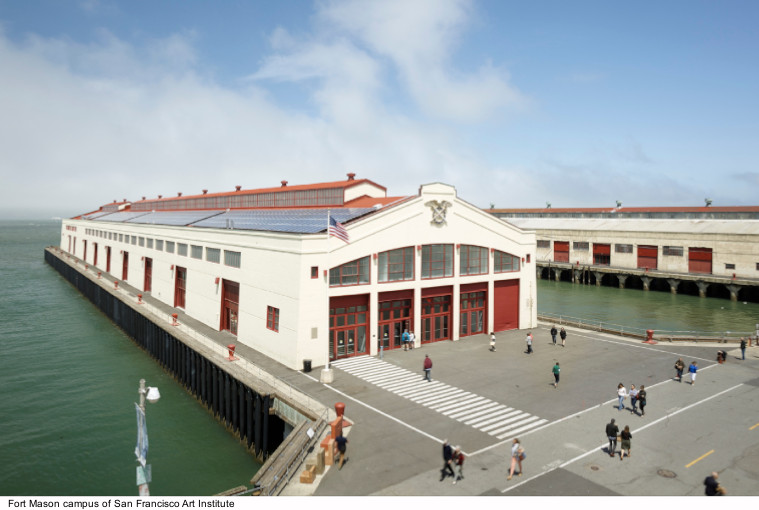 With this challenge in mind, day one was devoted to six unique workshops called Experiential Sessions organized to motivate us (in small groups) to interact, often with performative elements (each Session was repeated in the afternoon). The morning Sessions began after a ‘get to know each other’ break, a half hour of speaking with a stranger. This exercise was repeated often, and it encouraged participants to open up and find out about one another. The Saturday keynote address, strategically delivered after lunch, was a presentation by Domhnaill Hernon, Director of E.A.T., Nokia Bell Labs. Entitled The Future of Innovation at the Intersection of Art and Technology Hernon proceeded to bring the reassembled group up to date on the celebrated Lab’s residency program and current artistic projects.

After the second, afternoon ‘Session’, the much-anticipated international women’s panel was chaired by Diana Maria Gallichio Domingues, from the University of Brasilia (Brazil). She introduced the panelists:  Jadwiga Charzynska, director of the Laznia Centre, Gdansk (Poland); Luz Maria Sanchez Cardona, Chair Arts and Humanities Dept., Universidad Autonoma Metropolitana, Lerma (Mexico); and Anna Frants, Director/Founder, Cyland Media Lab, St Petersburg (Russia).  Unfortunately, the esteemed panelists mainly recounted their art/science activities and programs connected to Leonardo. A real chance to understand the challenges that affect women in these heavily male dominated, politically conservative regions was missed. It would have made a strong contribution to The Convening’s dialogue and was information that many of us expected.

After a short break, where attendees ate dinner either in paper bowls from a very busy food truck parked outside or at nearby cafes, including the famous Greens Restaurant (which required reservations and took more than the allotted hour).  I opted for spaetzle and a beer at the nearby German Biergarten, which offered outside seating. Because the weather remained unusually warm, the fresh ocean air was revitalizing. We reassembled at 6 pm for the cross-disciplinary performance program that would continue until 10 pm, held in the same hall as the day’s Convening (sans chairs).  It started almost 40 minutes later. CODAME, a network of Bay Area creatives, was curator and program master-of-ceremony for the evening. The event was well attended (it was open to the public for a $20 ticket). 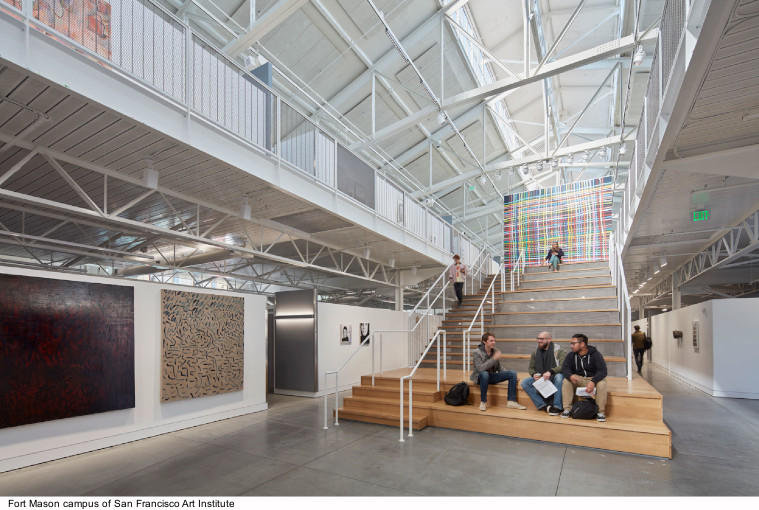 There was no printed program, but the online schedule was followed very precisely.  The selection was mostly durational, but two works stood out for me as being exceptional.  A surprise addition to the announced schedule, was a vocal performance by Anna and Enrica Bacchia, two sisters from Lugano, Switzerland. I had attended their afternoon storytelling Session, Con-SCIENCE Theatre of Being led by Anna, who is a self-evolution trainer (with her sister performing vocals). For their non-digital presentation, they announced they would be using one of the most important and earliest known ‘machines,’ the human body, to communicate across language. Their short duet of jazz-like chanting and humming was a stimulating departure from the otherwise electronic sounds that resonated throughout the evening. The second performance that deserves discussion was the performance of David Rosenboom, the pioneering cross-cultural composer who has been Dean of the School of Music at Cal Arts since 1990. Rosenboom has explored digital synthesizers and neurofeedback since the 60s, which he uses to create compositional algorithms, perceived as electronic music, with his bespoke violin. He captured the predominately young audience’s rapt attention. These two performances by mature artists dominated the event, and for this writer were the most professional, engaging and entertaining of the evening.

Manifesto Workshops or think-tank style break-out groups were the primary activity on day two of The Convening. They were held in the morning and afternoon, and after the mandatory ‘get to know one another’ experience, each group was challenged to reach deep to identify Leonardo’s main successes (and weaknesses).  Each group was asked to collaboratively present three ideas for Leonardo’s future. A non-profit organization, Leonardo/ISAST is based in Oakland, CA with a separate sister organization founded by Roger Malina Leonardo/Olats in Paris. However, new prospects for income are possible.  It was announced that, as a total shock to the organization, in the first year since its archive of articles has been available online, more than 400,000 PDFs have been downloaded from the website! Many of the articles are free. This new response to Leonardo’s journal represents a huge interest, and income stream, from a geographically diverse community. The Leonardo Journal is the most recognized of the organization’s publications and Malina reported that to date, 15,000 people and groups have published and have been presented in the Leonardo Journal.

Our groups collectively -and seriously- pondered the years that Leonardo has survived with a skeleton staff, and the contributions Leonardo has made through its network of partners. We tried to list what, exactly, it has accomplished. Across all Manifesto Workshops, most agreed that Leonardo has first and foremost helped artists, especially those on career paths in academe, by upholding a rigorous peer review policy for its several publications; it has brought to the art world’s attention, the expansive field of art-science and technically complex art, establishing artistic credibility for this area. There is no doubt that without Leonardo, the work of artists working in this once unaccepted, even obscure area of experimental art, science and technology would still be largely disregarded. 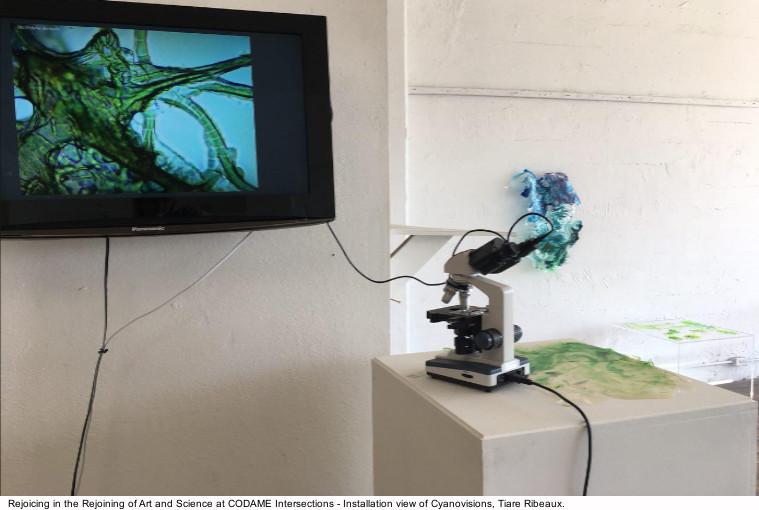 Leonardo has, through sheer persistence, established a meaningful dialogue between art, science, and the academy. This dialogue has multiplied and prospered over the past half century, bringing art using technology, science and electronics more openly into the mainstream of art discourse.  One of the most celebrated new activities supported by Leonardo is the independent network of LASER presentations (Leonardo Art Science Evening Rendezvous), which are talks, performance events, and gatherings on diverse art/sci topics, mainly held on university campus locations around the world. LASER has a strong presence and community support that is destined to grow. Each group presented three main points for the Leonardo board of directors to consider (they were to meet the following day).

After the short presentations by each of the Manifesto Workshop groups, Roger Malina accepted the Golden Nica award from Gerfried Stocker, artistic director of Ars Electronica, to commemorate the award for Visionary Pioneers of Media Art.  This was a repeat presentation, first made at the 2018 Ars Electronica festival in Linz, Austria, but made again in San Francisco to include the larger community of artists, scientists, researchers, writers, editors, reviewers, volunteers, and organizers who could not attend the first presentation.  Roger Malina’s final remarks supported his opening assertation: Leonardo represents a Network of Villages (and not a Global Village as McLuhan prophesized). The Leonardo community is a strong multi-national, intergenerational, collaborative, inquisitive creative community that connects across borders. Malina confirmed Leonardo’s dedication to continue its challenge to academic silos through transdisciplinary practices. 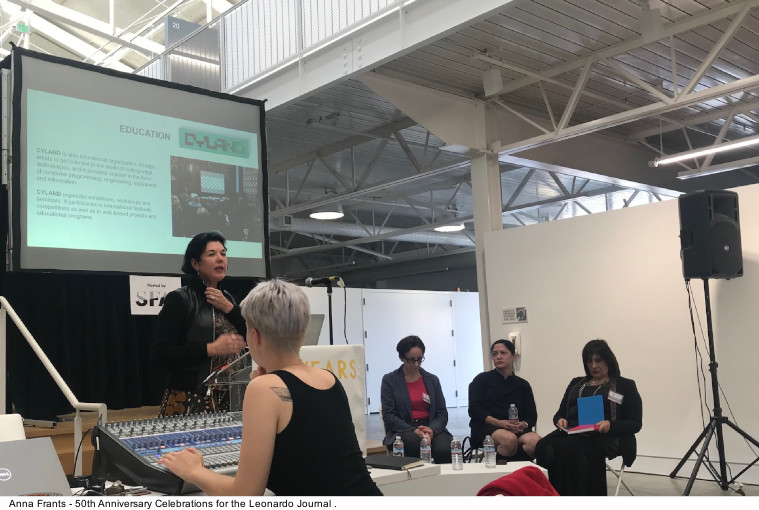 The Convening’s most important message was a surprise ending: Malina’s ‘soft announcement’ that Leonardo will partner with Arizona State University’s Herberger Institute for Design and the Arts and the School for the Future of Innovation in Society, which will expand resources, leadership and programming. Leonardo’s headquarters is expected to remain in Oakland, but a new position Executive Director will be established, and based at ASU. Roger Malina will remain Executive Editor of Leonardo. Further information will be forthcoming in the first quarter of 2019, but the Leonardo team is excited about the news. So, as Roger Malina had initially announced at Ars Electronica (and he re-stated at The Convening): Leonardo may still plan its 100thAnniversary in 2068! But there remains the serious question about whether the Centennial will be held on the Moon, in collaboration with the Mexican Space Collective, or if it will be held in a green grotto yet to be located. Which will prevail? The most interesting place for next generation to come together for the next significant birthday, will most likely be on the agenda for the next 50 years.