Sonic Acts 2019: discovering the controversy of the hereafter between the past and future

The 25th Anniversary of the Sonic Acts happens the last weekend of February with a three days event across Amsterdam. Combining art, science and research, the bottom line of the festival’s themes is the explorative and unpredictable element at the core of the scientific and artistic research.

Since 1994, Sonic Acts brings together different disciplines focussing on historical and contemporary developments to portrait the transformations, and contradictions, of the world. The combination of art and research becomes the ground to speculate on new ways to live and face the fast progress of contemporary society. 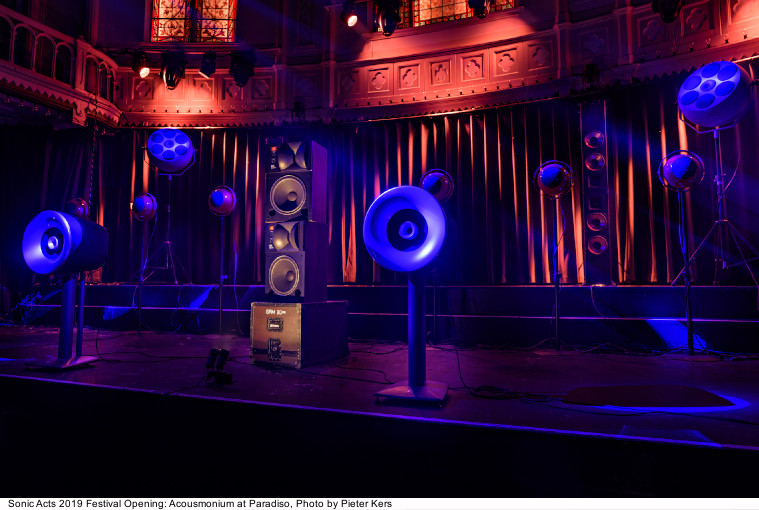 Rather than looking back to draw a comparison with the past, however, the Festival celebrates the quarter-of-a-century looking at the concrete hereafter to understand this unstable and changing world. Blurring the line between art and science, research and society, the Sonic Acts offers a gaze on the present to learn from its contradictions and transformations instead of looking back to find guidance or a direction to follow.

For this edition, the diverse locations hosting the Festival were also invoking this multiplicity of perspectives. Combining live performances and electronic experimentations, immersive installations and art exhibitions, the festival played with diverse settings to blend perspectives and points of view. Sonic Acts celebrated its 25th birthday engaging the audience on multiple levels to speculate on possible futures starting from the present.

The Festival officially started on Thursday night in Paradiso. After 11 years, the 80-speakers orchestra the Acousmonium comes back to Amsterdam featuring works by Okkyung Lee and BJ Nilsen, Thomas Ankersmit and many others. In a suggestive and immersive environment, the performance surprised the audience taking over space experimenting sounds and lights. 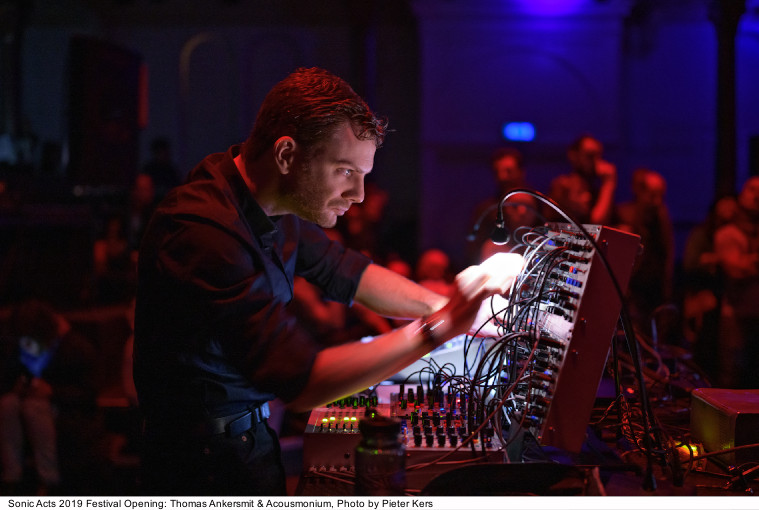 The following night with Progress Bar, Paradiso completely transformed to give a new experience to the visitors. Becoming a stage for DJs and performers, one of the three rooms captured the dance floor with the hybridised performance by Charm Mone or the vibrant sounds by SUUTO; upstairs, Oxhy played with sounds and words, while Matale closed the night in the last room. 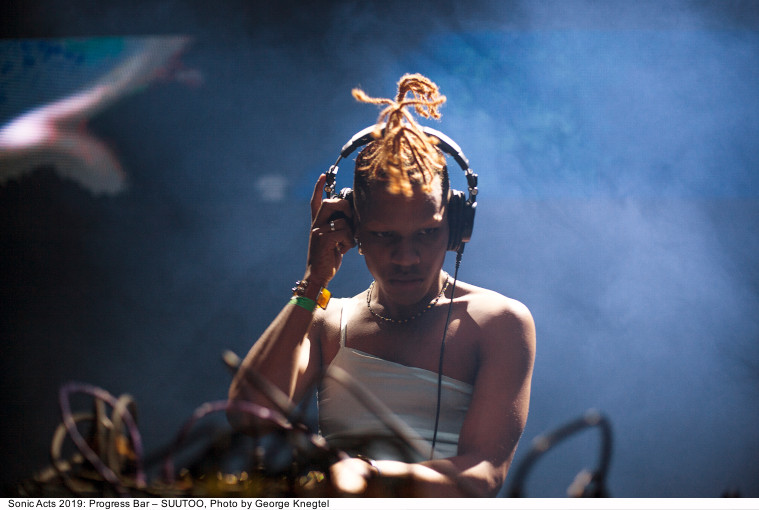 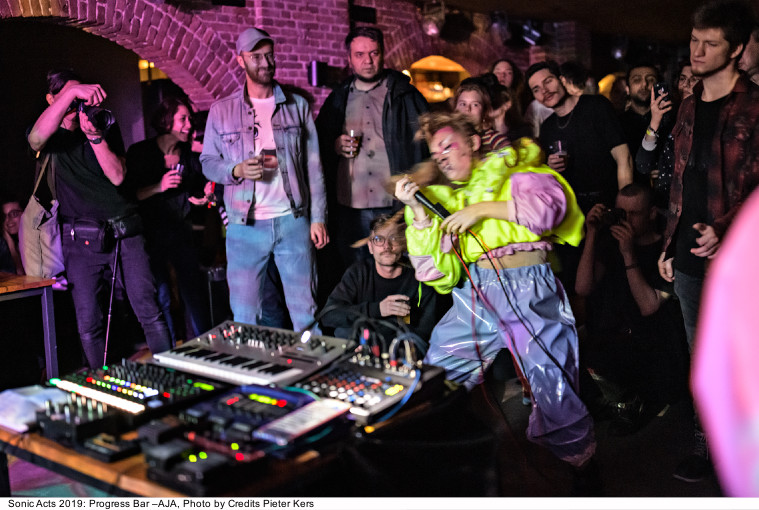 With Expanded Experience, Paradiso transforms again to celebrate the core of Sonic Acts’ research on sound. In the room upstairs, the kinetic and sound installation SPINVERSION by Pierce Warnecke took in the audience in a plume of smoke and lights tricks, followed by EVOL’s combinations of laser and sound. Meantime, in the first room artists and performers switched with disturbing and contorted sonic and visual games; Drone Operatør and Mette Rasmussen duetted with a saxophone and a drone; Polina Madvedeva and Andreas Kühne broke the atmosphere with a semi-autobiographical work on life in North Russia.

In addition to these interactive and live performances, Sonic Acts engaged visual art and digital media with an exhibition in Three-Acts across Amsterdam. Playing with the diverse vibes of the three locations, the exhibitions combined several media to propose more points of discussion on the current crisis of our society. In the Stedelijk Museum, the four hands performance of The Otolith with two pianos offered a composition celebrating the aesthetic of minorities. In collaboration with Sonic Acts to support sound art’s pioneers, the museum dedicated the space to a selection of video works by Tony Cokes questioning the concrete implications of capitalism on individual life and existing social structures. 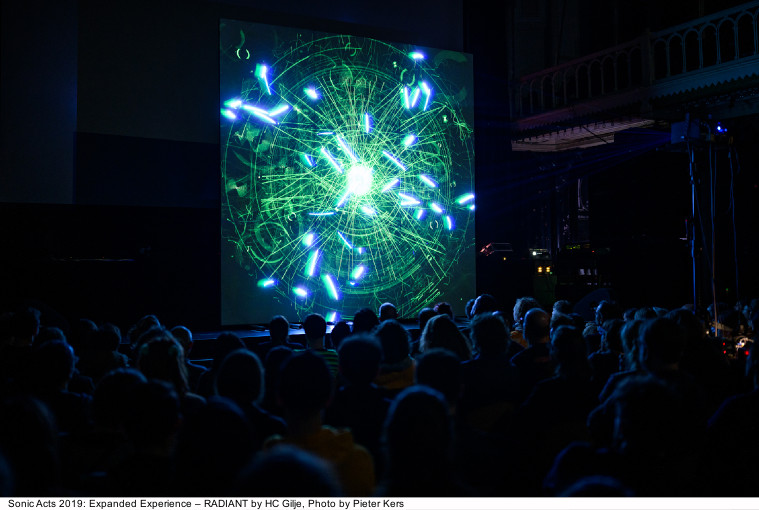 Moving to Arti et Amicitiae in the centre of Amsterdam, the exhibition examined the inequalities in society through power structures. The immersive 3D video Nightlife by Cyprien Gaillard, a dance of “natural” and urban landscape revealing crucial historical events on the loop of the lyric “I was a looser”; Emma Wolukau-Wanambwa called into question colonialism and language through the alphabet; Louis Henderson and João Polido, with The Living and The Dead Ensemble, invoked Haitian Revolution of 1791.

In De Brakke Ground, the exhibition focused on the relationship between men and nature in its diverse manifestation across the world. If Imperial Valley by Lukas Marxt was a reflection on the human impact of man on California’s cultivable lands, Ana Vaz collaborated with the Japanese author Yoko Hayasuke to explore how the body transforms after the toxic contamination of Fukushima. This exhibition suggested how the impact of humans on the planet is now turning around, forcing us to face the earth not as a separate entity but as an essential part of our habits and social interactions.

In De Brakke Ground, talks and conferences offered the background to connect artworks, films and live performances across the city. The round of conferences opened with a reflection on the notion of death from the philosophical perspective of Rosi Braidotti and Rick Dolphijn; in combination, the artist Susanne M. Winterling and the philosopher Didier Debaise investigated ways to rethink life through the eyes of nature and invisible bacteria. 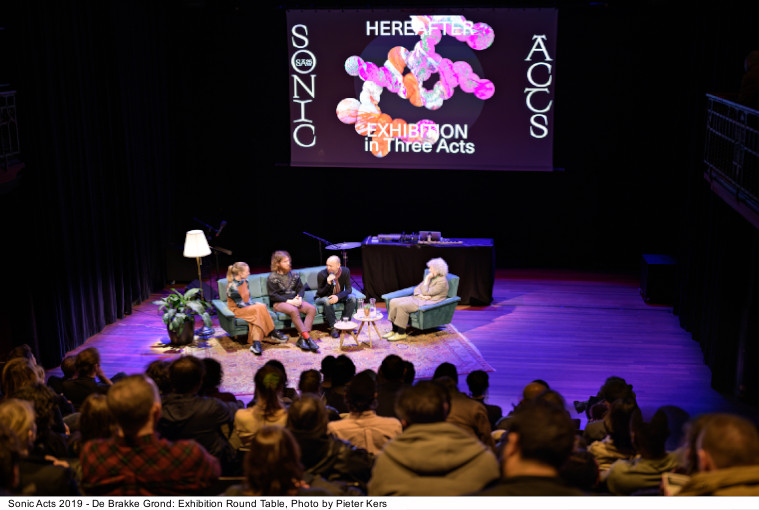 Expanding the research on contemporary developments, the following conferences explored how algorithms and data collection can become a tool of racism and colonialism; or the relationship between arts and politics with the artists Annie Fletcher from The Otolith Group, Emma Wolukau-Wanambwa and Tony Cokes; or how fiction stories can make sense of our times with the researcher Stoffel Debuysere. Combing several research and fields, talks and Q&As became the shared ground to discuss the themes at the core of this festival edition.

For the closing night, the location was the Muziekgebouw on the canal nearby Amsterdam central station. At the entrance, the audience could pick up a small fossil connecting the performance’s temporal journey to the auditorium. The set opened with the performers on stage sitting behind plain tables, starting the show with voice and electronics. On the screen in the background, a small circle evolved in a flow of images and videos as the performance goes, while Áine O’Dwyer jointed with voice and harp. Lee Patterson guided the electronics and sounds, while the other musicians spread between the balcony and the audience. 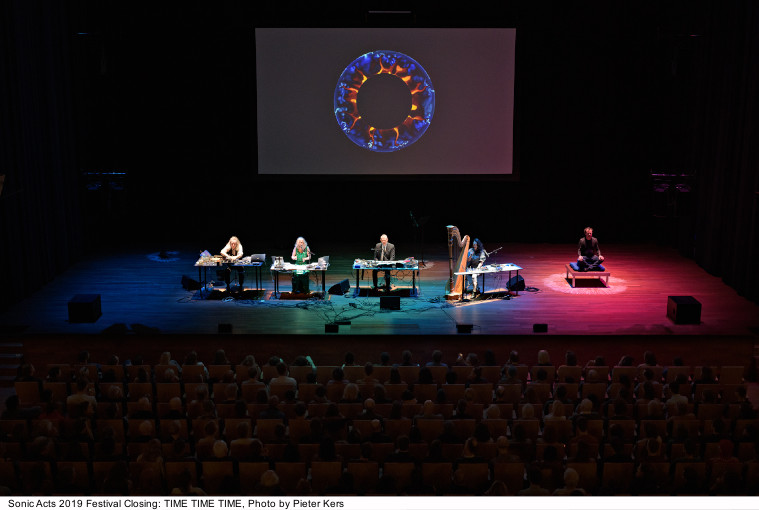 The game of time contraction and expansion captured the audience, which became part of the show. The different stimulations of visual and sonic kept the attention on different levels, playing with time as evolution, from AI to dinosaurs; and fragmenting it in a multiplicity of perspectives, from fertility clocks to black holes. In this combination of sounds, words and images deconstructing and melting time and space, Timothy Morton sat on the side of the stage facing the audience the whole time.

The closing performance by the philosopher and the Irish composer Jennifer Walshe summarised the intentions of this 25th anniversary. As the performance broke the concept of time in terms of evolution and change, the festival busted the present to reveal its contradictions in constant transformation. 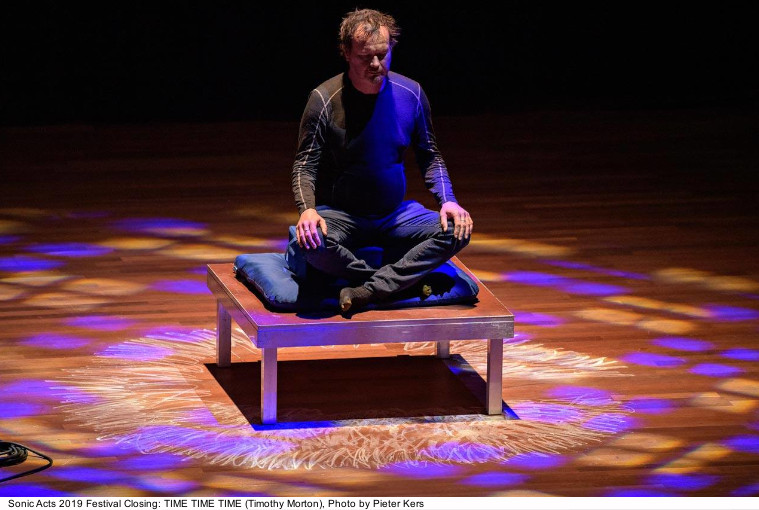 Blurring the lines between disciplines and engaging the audience in different locations, Sonic Acts speculated on the multiplicity and the complexity of our current times to find new interpretations for the hereafter. If it is impossible to provide a full picture of the global situation leading to a single answer, the festival reminded us how art can open a conversation between diversities, guiding our minds to new possible perspectives on the controversy of our times.