The municipality of Fermo presents the FermHAmente Science Festival

Some autonomous solar-powered micromachines, capable of capturing the intensity of radiation, transfer it graphically onto a sheet of paper into terms of intensity of the radiation itself. Vox Solis, an exhibition curated by Davide Vercelli, through the transformation of energies (solar, electromagnetic and mechanical light) invites the observer to dwell on these concepts and become aware of them spontaneously and simply. We are in the Piazza del Popolo of Fermo and every “work” is a photograph of the solar activity of that day. These are the signatures and the voices of the sun, in this case, of the “Science and Image” edition of the FermHAmente Science Festival, held from 17 to 20 October 2019, with more than 70 popular events and a crowd of up to 10,000 visitors among students of all ages and many families. 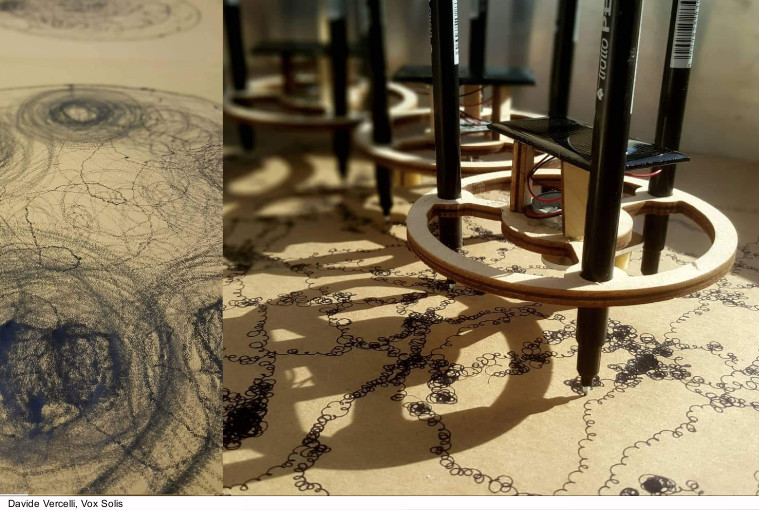 Fermo, province of Marche in 2004 with about 40,000 inhabitants, it is one of the richest Italian natural and architectural heritages and since 2018 it has entered the UNESCO “Learning Cities” network. In particular, FermHAmente offers the opportunity to enjoy cultural heritage in an unusual way, with a view to mutual enhancement of scientific excellence and historical-artistic heritage. Organized by Labilia, it has scientific direction Andrea Capozucca. Professor of Mathematics and Scientific Communication Techniques, with a PhD in Complexity Science, Capozucca has been working for over ten years in the field of scientific communcation, public engagement and science outreach with mathematics and technology, and is a member of the National Scientific Council of “Matematita ”, Inter-university center for communication and informal learning of mathematics, and he is a collaborator of the Pristem center.

Giada Totaro: What does FermHAmente mean? Can you tell us about the theme of this edition?

Andrea Capozucca: When we thought about the name of the Festival, we wanted it to summarize the focus (science), place (Fermo) and purpose (communication and democratization of science). Those who do science have a firm mind, just as those who participate want to get involved, to discover, to learn and to build tools to read and interpret the reality that surrounds them more carefully. The name of the host city, Fermo, lent itself to the game and this is how the name was born. The choice of the theme “Science and Image” was born from the observation of society and of the particular historical period we are experiencing and has opened up countless paths: from the use of the image as an indispensable tool of research and scientific communication to contamination and connections of Science with the world of Schools of Arts; from the interdisciplinary approach of STEAM in teaching to the new frontiers of virtual and augmented reality; from the image that society has of science to the image that science wants to give of itself. By their nature, Art and Science are connected fields, they intertwine and influence each other and the dialogue between them is one of the most interesting frontiers of contemporary culture. A dialogue that has the aspiration to explain the complex plot, to make the real known through reason and experience, to stimulate curiosity, to present two apparently distant worlds as faces of the same medal.” 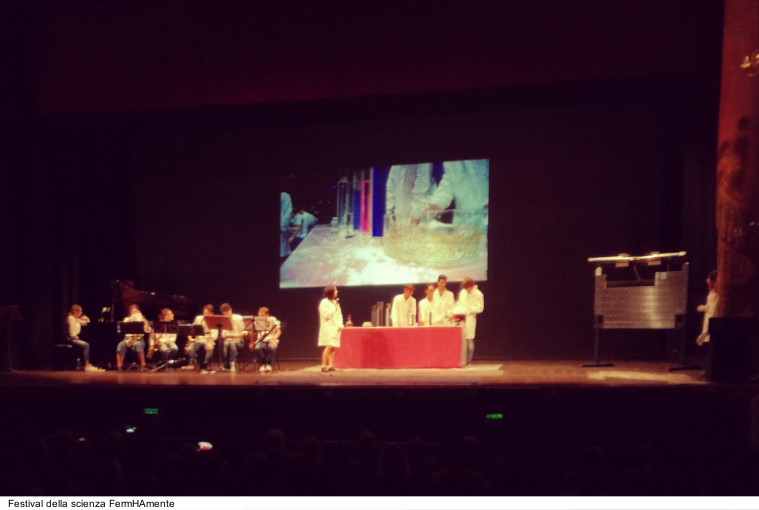 Giada Totaro: The discovery of the program has gone hand in hand with that of the environmental and historical heritage of the place, allowing (everyone!) to approach interdisciplinary workshops, shows and conferences, while taking long walks, listening to the soundscape and breathing clean air. With the laboratory “Train yourself to save yourself with virtual reality” I learned how to behave in earthquake conditions, thanks to the research project developed by the Department of Civil Engineering, Construction and Architecture of the Polytechnic University of Marche. In the Church of San Filippo, immersed in precious decorations and extraordinary artistic works, the company Talent taught how to make augmented videos and with the technique of the Stop Motion LEGO, while the audience of prof. Gianni Monti has created interactive installations with Arduino through the laboratory “STEAM da Vinci: Leonardo’s animated drawings”. And then the numerous conference shows, including “The colors between physics and art: a mystery to be solved” where viewers were asked to perform some physics and robotics and cryptography experiments, and “Little Red Riding Hood and the scientific experiments” where Chemistry, Physics, Mathematics and optical illusions have been explained and carried out by children on the basis of the known fable. Finally, I myself made a contribution with a scientific coffee where I wore one of the prototypes of “HAELLO_wearable bio interface for the performance” and with the “Open your Art <3″ a laboratory by STEAM Atelier, where boys and girls created small interactive digital works with the use of heart rate sensors and their emotions! The entire festival acted as a re-signification and appropriation, not only of the relationship between Art and Science, but of citizenship, guests, the environment and the history of the place. Can you tell us about the highlights of these three days? ”

Andrea Capozucca: Surely the first important moment of the Festival was the Unesco opening day on Thursday which hosted the first official meeting of the three Italian Unesco Learning Cities (Turin, Fermo and Palermo) during which the foundations were laid for a future collaboration on common learning-related projects of which FermHAmente will be an integral part and will offer scientific supervision. Another highlight was the Friday panel discussion with members of the Festival’s scientific committee entitled “Science communication: the role of the image and the imaginary”: a space for reflection and sharing enriched by interventions that have presented the variety and richness of the different points of view within the national scientific panorama. Other noteworthy events were the musical laboratories of Jurij Gianluca Ricotti, internationally renowned professional sound designer and arranger, the Innwork project that unites the world of school and entrepreneurship, the show between chemistry and music created on the occasion of the 150th anniversary anniversary of the birth of the Mendeleev table and the intervention of the Cicap on the scientific approach to hearsay. But I would not forget all the other activities which, with their quality, have substantiated FermHAmente’s offer. 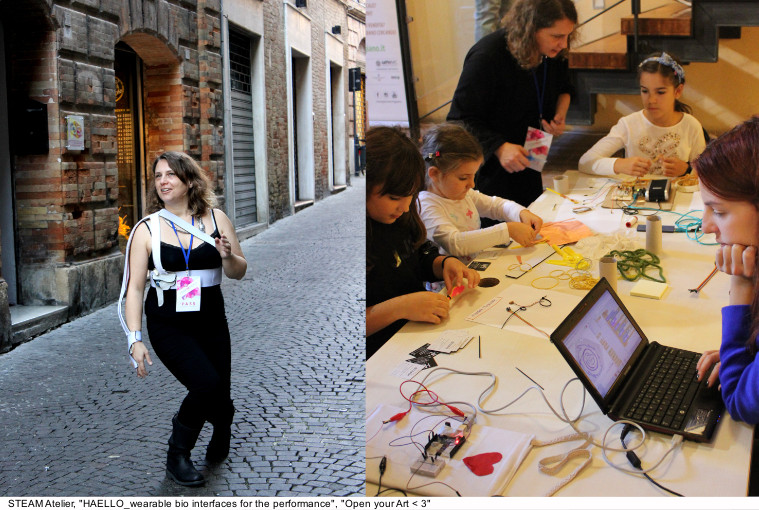 International partner of the festival and among the world leaders of the STEAM movement is Experice Workshop. It is founded by Kristóf Fenyvesi: researcher at the University of Jyväskylä in Finland, among the authors of the manual Aesthetics of Interdisciplinarity: Art and Mathematics, among the promoters of The Bridges Organization / Conference founded in the United States in 1998 and of MATHS in MOTION, a European project born a couple of years ago and dedicated to the teaching of mathematics through dance and movement.

Giada Totaro: Kristóf, tell us about your work and your relationship with Italy.

Kristóf Fenyvesi: Experience Workshop Global STEAM Network has started in 2008 and currently we have a Central-European Coordination Unit, located in Hungary, and a Nordic Coordination Unit, which is in Finland. In addition to our activities in Europe, we have several projects running in Asia, Africa and in the American continent and recently we have been very fortunate to get involved in Australian networks of STEAM education specialists. We have supporters and active collaborators in all these continents, a couple of hundreds of creative mathematicians, scientifically engaged artists, open-minded teachers, many parents who want smarter education for their children what they got, and amazing children, who want to make the world a better place, based on more sustainable solutions. Our strongest links to Italy are based on many devoted individuals and communities, mainly who are also involved in FermHAmente. Let me name Andrea Capozucca, Mauro Labellarte, Giada Totaro and their communities, like devoted teachers, such as Luisa Lenta and her pioneering team, who believe that together we are more. Who know that connecting Science, Technology, Engineering, Arts and Mathematics (STEAM) in education can take children much beyond the limits of these separate study fields. Integrative and engaging approach, which is based on the children’s own questions and own life can boost their imagination and prove that everyone’s special knowledge and sensitivities are needed to create a new idea or find a new solution. Sharing and learning both in local and global communities are the only chances to find several ways to cope with global and complex challenges, and also to become better and happier in our own life and share these positive feelings and the love of learning for life with the younger generations. 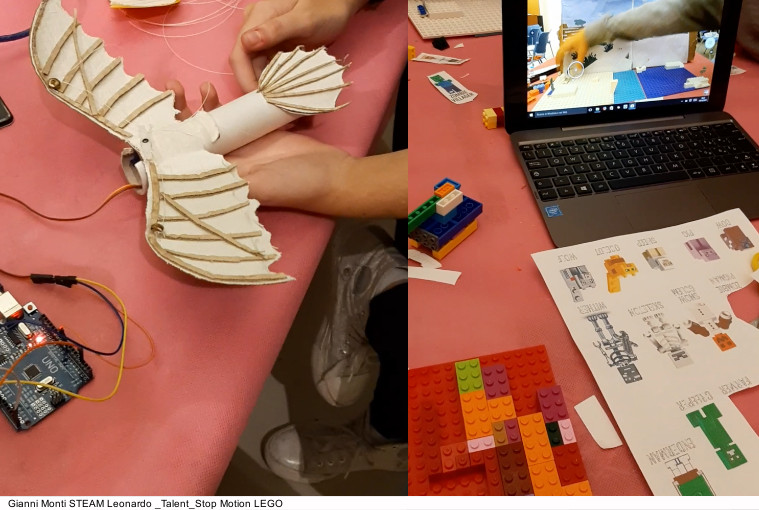 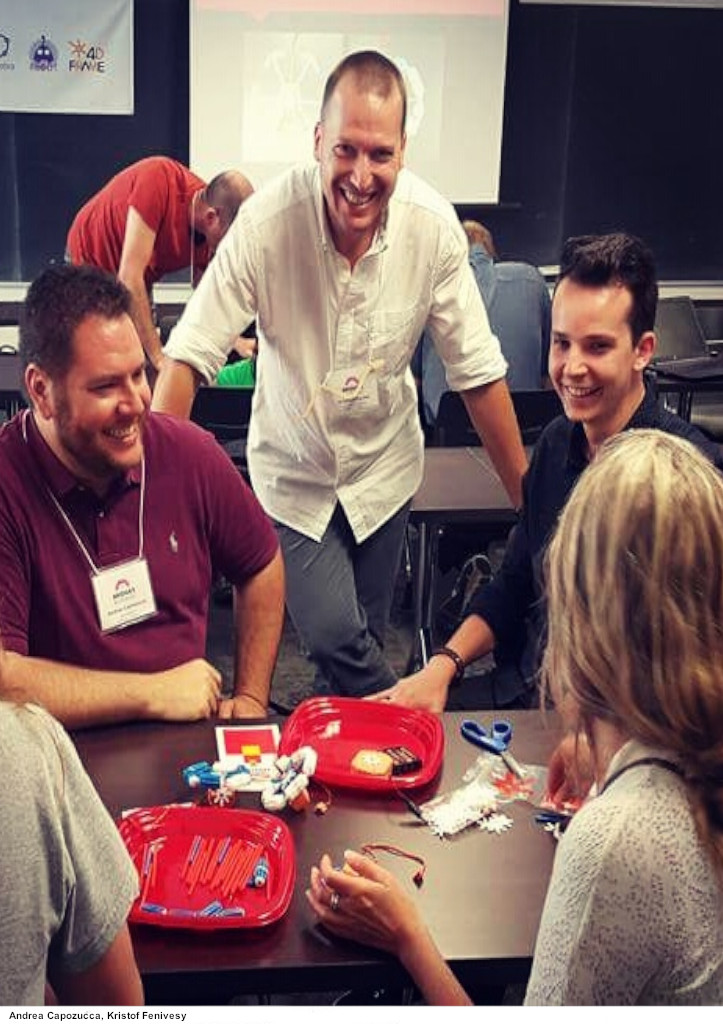 Compared to formats located in fair-type warehouses and with important noise pollution, given by the incessant succession of stimuli and products, without having time to reflect and act in one’s own time and with one’s body, FermHAmente is an absolutely concrete and virtuous example of how STEAM applied to the context of everyday life and combined with the values of history and civil life, can improve the well-being of an entire community. It would be interesting to see it realized in other cities and historic centers of Italy.