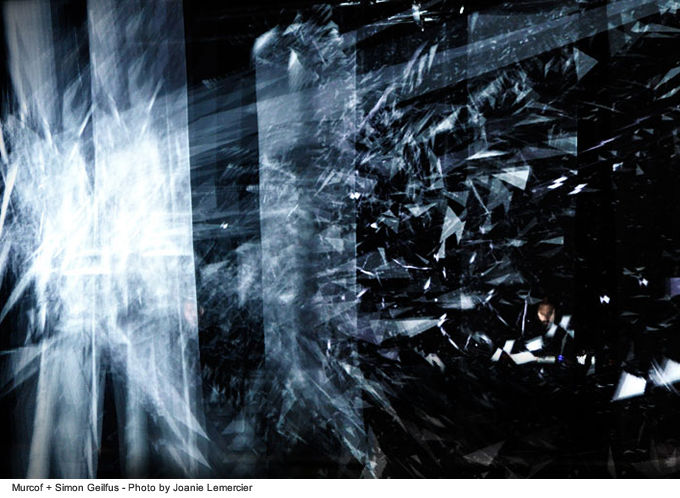 We have met the mexican artist Fernando Corona, also know as Murcof, the last 25th of July in the impressive frame of Maschio Angioino in Naples where, after a very long absence from the city, he exhibited with an extraordinary live show.

During the years (and with four albums with the prestigious English label Leaf) Murcof has gradually moved and opened his strongly digital horizons, dating back to his first debuts, towards evermore innovative and diagonal paths, in which he was able to sense the minimalist influence of the European classic contemporary music and the German kosmische musik, landing on an ambient and visionary sound.

Many are the collaborations and events, in which Murcof took part in recent years: the concerts at the Peter Harrison Planetarium in Greenwich, performances with the ensemble Mousique Nouvelle of Jean-Paul Dessy in the cathedrals of Bourges and Brussels, the Montreaux Jazz Festival (a trio with Talvin Singh and trumpeter Erik Truffaz), the live soundtrack for “Metropolis” by Fritz Lang at the Cinematheque in Paris, the Sonar Festival in Barcelona with pianist Francesco Tristano, the presence to Bios, Mutek, the performances in the Auditorium in Rome, that of July 2010 at the Ravenna Festival with the collective AntiVJ and that of September 2011 at the festival MiTo. 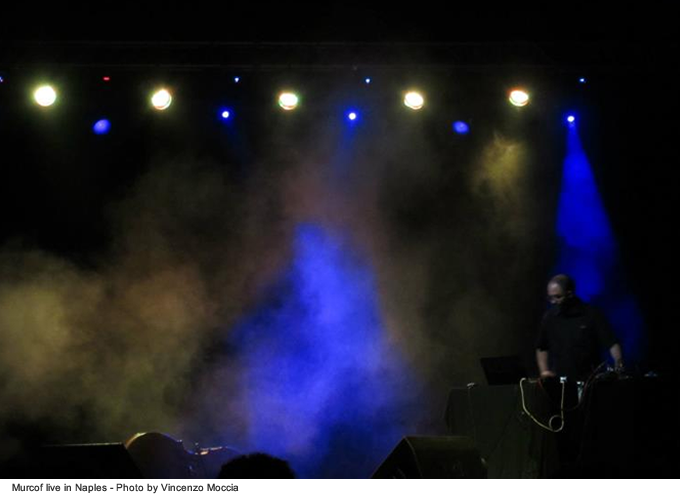 Murcof also composed the soundtrack for three films (“Amores Perros”, “Nicotina” and “La Sangre Iluminada”) and recently has experienced fruitful collaborations with the dance world and visual art (the mentioned collective AntiVJ and the artist from Bologna, Saul Saguatti). At the Maschio Angioino Murcof proposed new songs scheduled on the next album, which is likely to be released in late 2012. In this “canonical” appearance, the musician gived the best of himself, proposing a very essential set, where beats and atmospheres are mixed with great depth and clear attention to the sound.

In a second part of the performance he was joined by the bassist of the Teatro San Carlo, Giovanni Giuliano:  the two artists proposed a completely new set, the result of days of practice leading up to the concert, but also from environmental stimuli collected by Murcof in the city. Here, the performance becomes a little more frayed, less balanced, but it also represented a significant moment in giving the impression of a restless artist who strives, disorderly, in search of new ways to exit from the bulky cliché that traps him between the great characters of electronic music tout court. It is especially of these new roads, these new lines of research still in progress, that we have discussed in the fortified courtyard overlooking the Mediterranean Sea.

Pasquale Napolitano: To begin, I’d like to ask you about your relationship with the image, which in the latest stages of your career seems to me a crucial aspect. How has your work developed, in line with the relationship between music and image?

Murcof: I’ve always concentrated on the sounds and that’s what I still do, but I had the good fortune to meet on my way excellent video-artists, who have been able to interpret my work. This is the case of the Anti-Vj, of which I have always loved imagination and aesthetic universe. 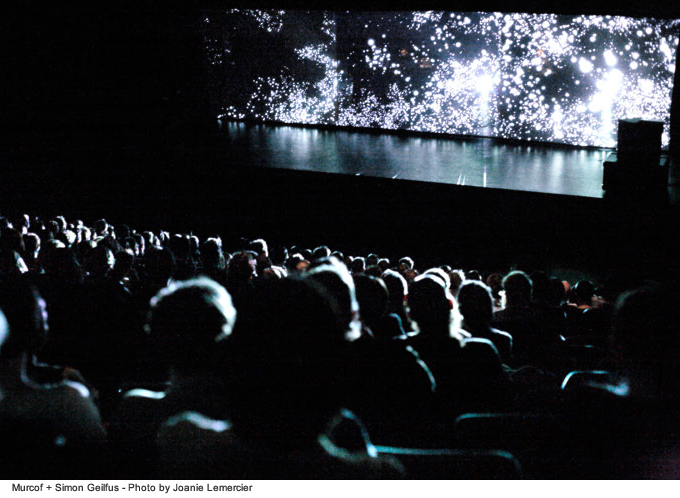 Pasquale Napolitano: How does the collaboration with the collective Anti-Vj start?

Murcof: A fruitful collaboration has started with them and it goes on since two and a half years, very positive and horizontally. The first time we worked together was in Manchester in 2009 and from then on we increased our collaborations, soon leading to numerous opportunities of exhibitions in museums, to build new productions from the start, in which image and sound develop and affect each other.

But, except for this type of experiments, born in total synergy and sharing, often there is a risk that the images cover the sound, too strongly orienting the spectator’s imagination.

Fortunately this does not happen with Anti-VJ, this is also why I am really happy to work with them. They are a team of 7-8 people, always open to listening to other ideas and able to find an agreement, even on technical requirements. For me it is a chance to give my music a “different way”. 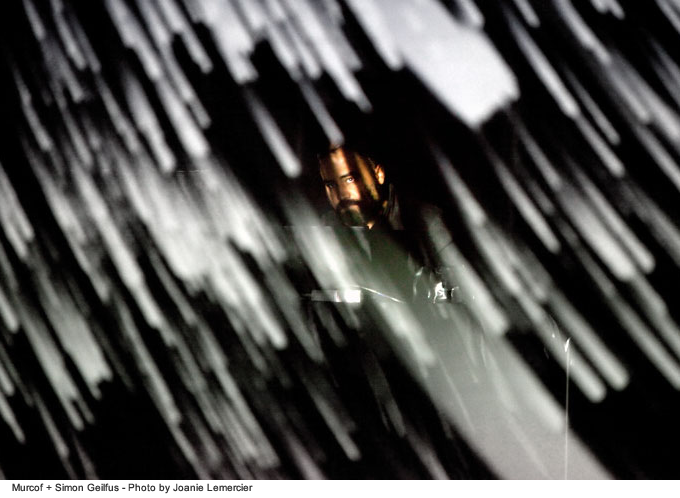 Pasquale Napolitano: You said you don’t want to limit the viewer’s immagination, suggesting prepackaged images. Does this means that with your music you want to evoke an a specific imaginary?

Murcof: No objects in particular. Rather, what I try to evoke in the audience is the sense of space. For example, using reverb to evoke large spaces, spaces that everyone can resemble in their imagination, or memories, its own world. I’m really influenced by these great spaces, which are not so present here in Europe, those where you can not see anything for miles and miles, for hours and hours. For example the desert in Northern Mexico, physical and mental space that has influenced me more than any other.

Pasquale Napolitano: And how was born the passion (or, if you prefer, the study) for Baroque Music? How did this particular combination appear? The combination of acoustic instruments with Baroque influences and electronic sounds?

Murcof: My growth as a musician is full of classical music as well as electronic music, and I want my music to be a synthesis between these two universes. I would like to be able to use the acoustic sound as an excuse to explore new electronic textures, as through the sound of strings (inserted into the computer) new tones and new compositions can be discovered. As new tools, which may be involved by providing new insights to the melody, to the harmony, and above all, for me, to the texture and timbre.

Pasquale Napolitano: So we could define this new phase of your job as a rewrite, in electronic key, but with the same modality of Baroque music, as a music that is completely combinatorial, made up of layers, in which new elements are present to dialectically alter the composition…

Murcof: My father was a musician, a blues-man, but he loved classical music, especially Bach: there is a lot of Bach in my formation. And I was very influenced by experiences such as those of William Orbit or Wendy Carlos of classical interpretations through electronic synthesis, in particular the interpretation of John Santos of Bach’s heritage. I think that this has entered the “core” of my sense of music [he laughs]. However there is an intentionality in the approach, not that I sit down and say, “ok, now I do Baroque music” or something like that…

Pasquale Napolitano: After everything we said, would you consider yourself an electronic musician?

Murcof: Well… i would say yes, because thanks to electronic music i can find new sounds and create other ones. It is an instrument with which I try to create a new language.

Pasquale Napolitano: Would you also define yourself as a sound designer?

Murcof: Yes, sound designer, engineer, musician and much more…but the sound design is really an essential aspect, in order to build the sound in an analytical way and know how to intervene on the timbre, on the harmonics, the layering of sound. Many times I want a melody and I find anything else, thanks to technology. 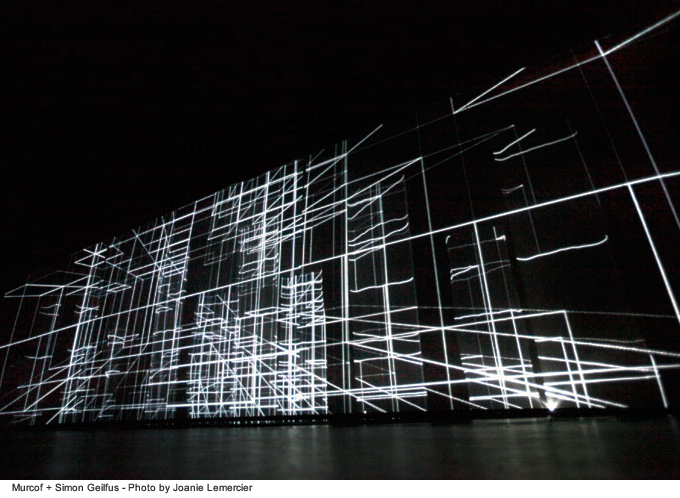 Murcof: Firstly working with Anti-Vj, between October and December we will create a ten-days residence where we intend to condense everything done in the last two years of working together. Another project, on the same line to what has been presented here in Naples, will be next winter with Vanessa Wagner, a French pianist. We are preparing for two concerts in Paris about the re-interpretation of the classic-contemporary heritage: Ligeti, Paart, Satie, Feldman, Cage, Adams. She has a deeply academic setting and we will try to find a common ground in the direction to give to the interpretation.

There is another “radical” project with some musician friends from Tijuana, and two French composers Eric Trufazz and Dominique Mahut, with which we do a study on traditional Mexican music recordings, in particular those of shaman tradition, based on voice, violin and guitar. We have already tested the new compositions on a tour last year in France, and now we are creating the album.

And finally I have new ideas for the project Murcof…