Palms Palms Palms brings together twelve years of research on a large scale for the first time. From the mining of minerals in the Democratic Republic of Congo to the political reality of the casinos in Macau, and from an exhibition rehearsal to the dance of conveyor belt work, Cohen and Van Balen’s works of art are preceded by years of research. In their work, Cohen and Van Balen interrogate infrastructures of globalized production and supply chains through the prisms of culture, personal histories, and geopolitics. The show displays objects, installations, and films produced in factories and workshops in China, biochemical laboratories in Japan, hospitals in England and Belgium, and coltan mines in the Democratic Republic of Congo. Their latest body of work considers gambling as a contemporary condition and investigates its political and cultural dimension within the frameworks of labour and neoliberalism. Through the layered narratives, the collection of video and sculptural elements establishes links between actual, albeit distant, charged realities on a geopolitical stage. 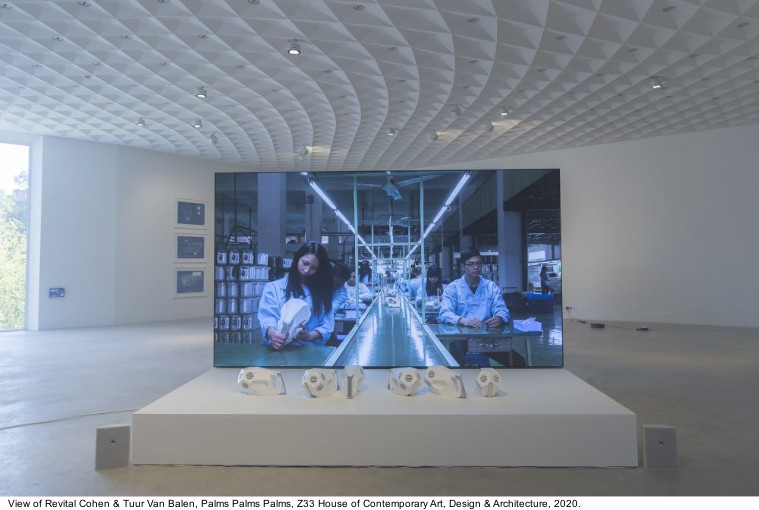 In a world where everything is networked, the artists challenge cultural, political and economic stratification. They seek out boundaries, test and question logic, turn the prevailing system on its head. This makes their sculptures, installations and films as layered as reality itself. Every detail tells a larger story and as artists, they are right in the midst of it all. No work stands “We question who and what is produced in a process.” Revital Cohen & Tuur Van Balen Revital Cohen & Tuur Van Balen 6 alone. The artists do not take a stand or offer solutions to social problems. Rather, they uncover the glitches in the structures and in our way of thinking. This exhibition is not the artist duo’s first appearance in Z33. After graduating from the Royal College of Art in London, they had an exhibition at the Hasselt beguinage in 2011 with an alternative vision of nature. A selection of their works are included in the collections of the MoMA and M+ Hong Kong, among others. At the invitation of Z33 and Vlaams Cultuurhuis De Brakke Grond, the artists joined forces with curator Christina Li in 2017. In the theatre rooms of this Amsterdam venue, the duo reflected on the production process of their first retrospective exhibition. It turned out to be a presurvey for Palms Palms Palms, the exhibition you are about to enter.

A selection of works at Z33
Palms Palms Palms arranges works and research from 2008 until the present in constellations allowing for new relationships to emerge. The Immortal (2012) is an installation composed of life support machines connected to each other, while 75 Watt (2013) revolves around an object whose sole purpose is to choreograph the movements of its own assembly. For Sterile (2014), the artists worked with a Japanese biologist to create a goldfish without reproductive organs. A collection of prints and sculptures titled Heart Lines (2016) are derived from X-ray images of taxidermy animals from the Africa Museum in Tervuren. A series of works culminating in the film Trapped in the Dream of the Other (2017) revolve around Congolese minerals, gunpowder and conflict geologies. 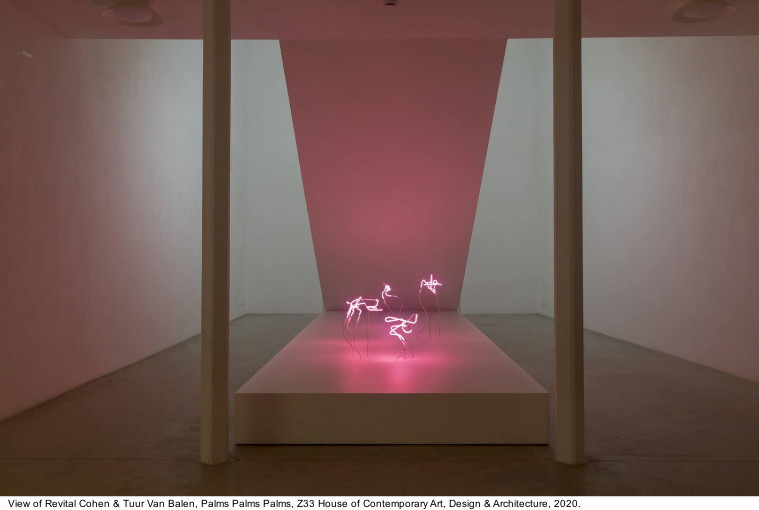 From 2012 to 2017, Cohen and Van Balen investigated the ‘treasure’ hunt in the Democratic Republic of Congo. The Congolese mining industry extracts coltan, a mineral that can be found in almost every mobile phone and gaming computer. In the former Belgian colony, other countries are still in charge. Where there is money to be made, battles are fought. For the story behind our electronic devices, we are groping in the dark. In fact, we simply don’t give it much thought. Congo is in your pocket and on your laptop. With our digital devices, we unwittingly maintain the system of economic colonization. The artists turn this system on its head and dig the minerals and their stories out of our electronic devices. In D/AlCuNdAu (2015), for example, in front of you lies a mountain of distorted objects from computers: 25 hard disks from an Icelandic data center. Cohen and Van Balen transformed the hard disks back into their original mineral form. An artificial ore consisting of Aluminium (Al), Copper (Cu), Neodymium (Nd) Gold (Au) and Icelandic volcanic stone appear out of the geopo – litical landscape. The aluminium (Al) hard disks – still full of ones and zeros – are melted and recast in sand moulds.

The recent video work on gambling, The Odds (part 1), weaves together racehorses anaesthetised and collapsed on ketamine in a knockdown box, showgirls from a casino in Macau belonging to the world’s largest political donor and Steve Ignorant from anarcho-punk band Crass performing in a bingo hall originally built as a cinema designed to look like a church. Made specifically for a large LED screen, the footage is overlaid with pulsating light formations inspired by Vegas techniques of visual seduction.