Artists and robots at Grand Palais in Paris

This exhibition is an opportunity to experience works of art produced with the help of increasingly sophisticated robots.  Featuring works by some forty artists, it offers a gateway to an immersive and interactive digital world – an augmented body sensory experience that subverts our notions of space and time.

In an ever more robotic society, these artists explore new technologies, including Artificial Intelligence, which is potentially revolutionising human lives and even the conditions in which artworks are produced, presented, disseminated, conserved and received. These works contain a warning. Although Artificial Intelligence can help us, it also threatens to make itself our master by reducing humans to simple slaves to performance.

Artists have extensive experience of this dangerous game: from the first prehistoric cave paintings, they have used technology to achieve a goal and then subjected it to their questions and imaginations. Even more sophisticated software has given rise to increasingly autonomous works, an ability to generate infinite forms, and interactivity with audiences who permanently modify this game. 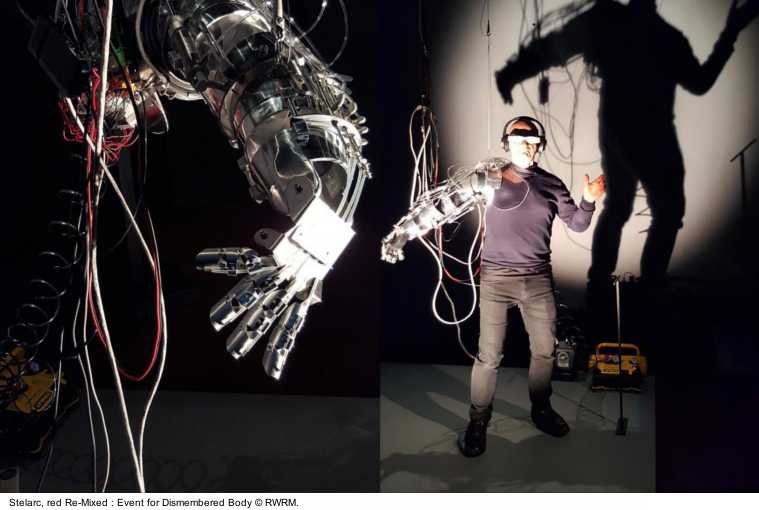 This selection of works explores the questions raised by artists, which are also questions we ask ourselves : What can a robot do that an artist cannot? If it has an artificial intelligence, does a robot have an imagination? Who decides: the artist, the engineer, the robot, the spectators or everyone together? What is a work of art? Should we fear robots? Artists? Artist-robots?

Artists and fiction writers have long dreamed of artificial creatures capable of replacing or even surpassing human beings. In the 19th century, Mary Shelley created the first science fiction hero, Frankenstein, the inventor of a monster that eventually threatened to destroy humanity. The word “robot” was used for the first time on stage in Prague, in 1920, in a play by Karel Čapek, about the revolt of slave machines.

From the 1950s, artists began to put together robots to create, paint, dance and compose music. Following in the footsteps of pioneers Schöffer, Tinguely and Paik, creators in every discipline are now working in the field of digital technology, using tools that are making robots increasingly autonomous. 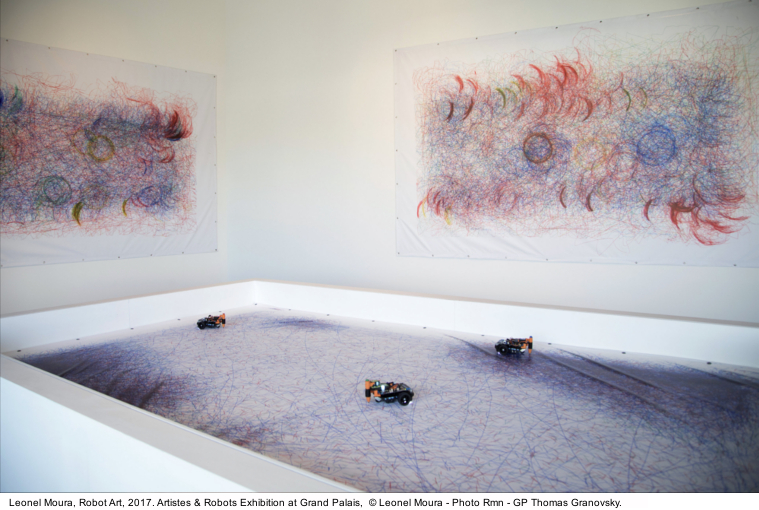 Ever more independent, these machines move in ways that are sometimes so physical that we attribute them with an almost animal, human or even psychological dimension. Robots are becoming invisible. Powered by computer programs and algorithms, technology is disappearing in favour of infinitely generated forms that can change according to our physical movements.

Rather than moving from reality to dreams, or from the material to the virtual, artists are experimenting with new technologies. Their palette is a canvas with numbers in unlimited combinations. The issue of tempo is fundamental, and everything moves very fast, with thought immediately followed by action.

Forms emerge from the computer in real time; images proliferate, fade away and give way to others, which metamorphose in turn. In fact, robots are becoming so autonomous that they appear to challenge the authority of the artist who delegates part of their power to the machine. We know how the work begins but not when or how it will end. 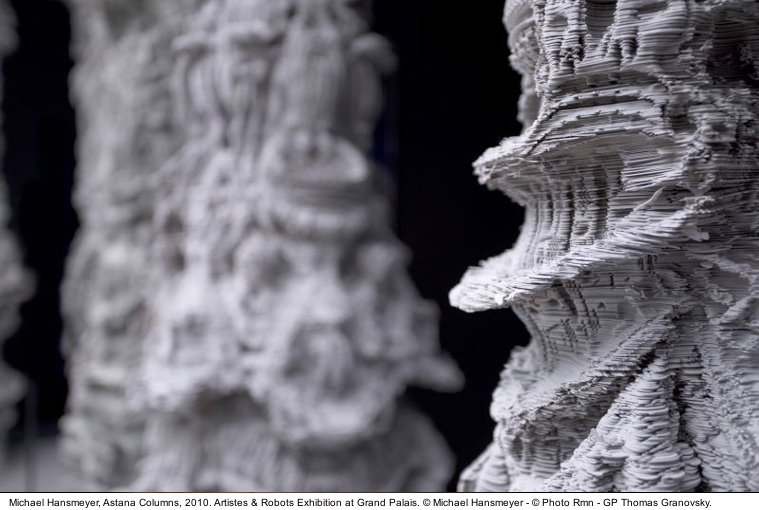 In 1951, mathematician Alan Turing wondered whether a digital calculator could think. Taking this thought a step further, the controversial pioneer of transhumanism, Ray Kurzweil, has predicted the emergence of an absolute form of Artificial Intelligence applicable to all social and personal fields in the near future.

He suggests that we understand and dominate the functioning of the human brain, to allow us to evolve and become more efficient, immortal and downloadable. Contrary to this new kind of prophecy, pundits remind us that there is no scientific evidence for such a future. Artists are grasping the atmosphere of these new explorations using Deep Learning (advanced machine learning), and even parodying or deflecting it.

As our lives become increasingly connected and managed by artificial systems, their works of art lead us to think, feel, and laugh at robots. The works that descend from robots, just as we descend from monkeys, speak of poetry, politics and philosophy.

They force us to reconsider how we measure what it means to be human. They are the object of a joint work involving the artist, the engineer, the robot and we, who modify interactive works in passing. Robots thus become co-originators. Will it make us more human, more like artists, or more like robots?