La Molleindustria, When The Goin’ Gets Tough 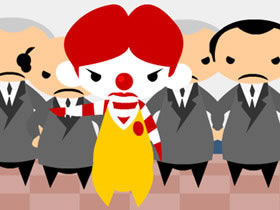 A process of creative deconstruction has been assaulting one of the most representative “mass entertainment” commercial product: videogame. Groups as Molleindustria, Newsgaming , Antiwargame, Metapet deconstruct schemes and contents of videogame language changing videogames from entertainment instruments into soft stings to kindle lethargic brains.

These kind of games which are often realized in Macromedia Flash and called politicalgames or subvergames  are online detonators for our critical sense.

Molleindustria represents one of the most interesting laboratories of vivacious experiments of creative contra-information. They create software art, media activism and net art products far from the market of digital entertainment; they reinvent one of the pop culture language sabotaging mass thematic and rules. Their hyper-coloured and gummy 2D graphics is used to “softly” combat, to mordaciously and transversally critic temporary jobs ( Tamatipico ), information censorship and control ( Enduring Indymedia ), the stereotypes of macho sexual culture ( Orgasms Simulator ), and the filthy actions of multinationals ( Mc Donald’s Videogame ).

Claudia D’Alonzo: How did you chose to kindle lethargic brains and critic sense through videogames?

Paolo Pedercini: last years videogames have frequently passed over the limits they have been clogged for years. Commercial videogames, shooter videogames commissioned by the pentagon to enlist young people, and religious videogames were created. Entertainment industry context is connected to cultural production: we talk about infotainement and edutainement, there are videogames based on movies and movies based on videogames, “pokemon” or “star wars” brands mark huge consume subcultures, not a series of homogeneous products.

At the same period the huge world movement that criticized the neo-liberalist order started to interact with mass communication means in a different way. We thought about videogames as means of communication and cultural confrontation. Even designer artists and academic people turned over in their mind the same thing. It was going to happen.

Claudia D’Alonzo: Your works are called ethic videogames, politicalgames, subvergames and they represent a convergence between software art and media activism. How do you connect in your works the communicational aspect and stylistic choices? For example, from the visual point of view, you follow an easy graphics: little details, puppet characters and sounds, a cartoon-like aesthetic. How this style is functional to social and political contents?

Paolo Pedercini: a lot of these stylistic choices are made up to react to some stereotypes. The dirty and bad imaginary of underground cultural production and antagonist communication is good for adolescents products only. On the other hand new media art aesthetics are uniquely adopted to differ from the mass cultural production.

“Traditional” artists were protected by a rigid compartmenting: a painting or a sculpture beyond their value  is always perceived as a work of art. On the contrary, artists manipulating less exclusive materials as video and software risk to have their production labelled as popular or commercial production. So they compulsively choose low tech, glitch, graphic minimalism to differ themselves from the mainstream visual culture. These expedients are metabolized in a few years, (think of “pixeled” H&M walls).

This systematic withdrawal, this formal research to be used by the mode system is very sad. This is why we prefer to accept the deal of pop culture. In a sense this is the culture jammer approach that re-elaborates some mainstream elements, and the indie-pop music player approach that adopts radio phonic sounds and structures.

Claudia D’Alonzo: You use videogames as a language and you sabotaged some fundamental elements: one of the most evident is the impossibility  in some of them  to win. What are the aspects of classic videogame are you interested in deconstruct or exploit?

Paolo Pedercini: It depends on the message you want to pass on. Don’t forget the meaning of a videogame is  mainly  in its gameplay, its mechanism. This is where you have to operate. Replacing Bush with an alien is not enough to criticize neo-cons administration. This way the player won’t receive any information and the intrinsically warmonger and “rambist” aspects of that kind of videogames will be untouched.

Claudia D’Alonzo: Are you planning to create interactive online videogames?

Paolo Pedercini: We don’t know yet. Multiplayer games have great potentialities because they are real social environments where you can create rich and unpredictable interpersonal relationships. But the risk is the game mechanism imprisons these relationships completely excluding bodies. I’m thinking about MMORPG I wrote a reportage on last year: They are a very interesting phenomenon but they are sinisterly in line with the general trend of isolation and atomization of the individual.

I prefer to trust social networks that exploit web potentialities in an opposite way. They don’t create machine-related relationships (i.e. payment services), they put people in contact.

Paolo Pedercini: Apart from the fact all videogames are political; we have to say that casual gamers (online game users) are more interesting than typical video gamers because they are a more heterogeneous group. For example there is the same percentage of males and females. The situation where the fruition occurs is more interesting; if you want a commercial game you have to pay and install it, you have to be more motivated.

Claudia D’Alonzo: You are among the most interesting exponents of digital art scene and you took part at some exhibitions such as the Radical Software Show at the Piemonte Share Festival in Turin . How do you conciliate these expositive situations with your immaterial nature related to the online spreading of your works? What kind of dressing do you chose? Do you give promoters some suggestions?

Paolo Pedercini: Yes, sometimes someone mistakes us for artists and wants to expose things everyone can see from home. Software art is cheap to expose, it’s enough to place a pair of computers; you don’t have to pay authors to set up complex installations. That’s why there are more digital art critics than digital artists.

No, we don’t give any suggestions on the set up.

Claudia D’Alonzo: I’d like to know your impressions on the Meet The Media Guru 2006 Conference dedicated to one of the cyber culture guru Geert Lovink. What do you think about the decision to place Lovink in an institutional context like Santa Teresa’s Mediateca in front of a public made up of people who were not lovers of new media and its most activist forms.

Paolo Pedercini: I think the contra-cultures and radical and critical components role in the development of the Net is now accepted.

As relate to Lovink’s conference, I agree with his net-criticism concept. We use the same approach with our videogames, these hateful and wonderful objects. I found interesting his opinion on blogs phenomenon as a cynical reaction to the crisis of new economy. The blog is a collective means to look for verity.

But I had the impression he gave a too enthusiastic judgement to “blogsphere”. Now there are editorial groups controlling the most important blogs. Blogger has now become a profession and a commercial instrument to perfectly join information, on-demand entertainment and a non-invasive commercial purpose. It’s hard not to think capitals will soon invested on this means.