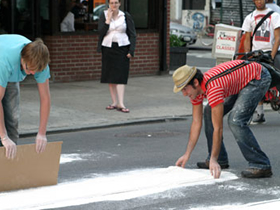 Christina Ray lives in Brooklyn, New York. She’s an artist and a curator focusing her efforts on psychogeography, the creative investigation of physical and psychological spaces inside the cities, she founded Glowlab, an initiative which produces art linked to the fruition and interpretation of urban spaces, as well as the Conflux Festival.

A walk with her turns into a parallel journey to discover the city which lays before our eyes every single day, but to which we never really pay attention. A city artists are free to use and transform, before offering it back  for free and without making any money on it. Through their intervention, the environment which surrounds us becomes something familiar and unusual at the same time, an active response to the visual hammering of commercials and messages from the powers that be. In this way, the same building can host layers of graffiti on one side and the sterile sign of a restaurant on the other, a street sign can hide a peace message, on the walls there are indications for the “sailors” and window displays include affectionate homages to New York. All this in an area of just a few blocks…These single interventions become a collective and coordinated action during the Conflux Festival, welcoming every kind of artistic expression which may contribute to the active exploration of urban spaces – from maps to digital technology.

We interviewed Christina inside Glowlab’s operative space – a mixture of house, studio and gallery – in occasion of the opening of a personal exhibition by Steve Lambert, a multimedia artist from San Francisco now living in Brooklyn. Steve is the founder of Anti-Advertising Agency, co-founder of Budget Gallery and collaborator of Eyebeam’s Openlab, a cultural centre dedicated to digital arts. His works range from performance to videos, from public art to Net art, also including more traditional media such as drawings and prints. In his latest project, commissioned by the San Francisco Art Commission and produced in collaboration with another artist, Packard Jennings, private citizens as well as well-known personalities have told the two artists how they pictured San Francisco if all barriers, constrictions and rules (from the laws of physics to those of politics or economics) were to be abolished. The artists then produced drawings and poster of this ideal San Francisco – from cableway-streetcars to floating buildings – and presented them to the citizens. An example of how art can contribute in changing the urban landscape in a psychogeographic sense…

Monica Ponzini: Christina, your main expertise is psychogeography and its relation to contemporary arts: can you explain this term and its applications to our cities?

Christina Ray: Psychogeography started in the late 1950s among groups of intellectuals and writers. It didn’t really start out as an art movement, but involved looking at the city, looking at how we explore it, what we enjoy about it, what we don’t enjoy about it, what we might want to change, but also really valuing the unique moments that you find in cities that involve chance and randomness, accidents, those kind of things, and really becoming more aware of cities and how we live in them. Since the late 1950s when it started, there have been many things that have followed that are falling in a similar category. Artists like Vito Acconci, Sophie Calle, other performance artists have used public space to do experimental artwork and performance projects. Today there are artists that are using similar techniques, a lot of time we have artists using more technology involved in their project  a sort of a new development- , but still the idea is to look at cities – what do they mean, how do we want them to be and how do we fix the things that we perceive as problematic in cities.

Monica Ponzini: New York and other cities around the world: can you talk about their differences, from a psychogeographical point of view?

Christina Ray: I was recently in Rome and one thing that struck me there was the scale of the city  that was my first trip and I found myself just looking at things at a more “eye level”. Even a simple thing like “where do your eyes go when you’re looking around” was more of a simple scale, fewer advertisements  we have lots of signage and billboard all over our cities in the US  I also have lived in Japan , and there it’s even more pronounced the amount of signage and visual clutter and advertising that you have But some artists like to use that as a jumping off point for their work. A lot of artist would respond to that There are these differences in every city, sometimes is a question of density  what is the density of the visual environment, what you’re seeing around you, density of people I live in Brooklyn for example and it’s much less crowded than just a quick trip across the river to Manhattan . I think all these things can serve as starting points for looking at creating new artwork, and we have a lot of artists that do that, looking at the patterns of traffic, people, signage, those kind of things to really get their ideas going for how to make artwork.

Monica Ponzini: What influence have new technologies over psychogeography and its applications to art?

Christina Ray: I run an event called the Conflux Festival, which is a 4-day event, that takes place every year in New York , and we have a lot of projects that deal with psychogeography in new ways. People experimenting and asking what psychogeography really means today, and a lot of these artists are using new tools. We have people doing podcast and mobile video, projecting video, but also using video as a tool of exploring, we have cellphone applications  lots of different projects that are taking the tools of technology and applying them to experimental artwork on the streets.

Monica Ponzini: Glowlab and the Conflux Festival are the two main projects that you developed. Can you talk about them?

Christina Ray: Glowlab is the project that I started about 5 years ago, really to act as an umbrella for other projects. It contains a lot of smaller projects, mostly collaborative work that I do with other artists. It involves art projects, but also bigger events like exhibitions and curated events that happened on the streets Those turned into a Festival, basically. In 2003 with some other artists and friends we asked some people, through online channels: “would you like to come to New York and have a weekend where we all can make this work together, and see what happens?” They said yes and we had our first event on the Lower East Side of New York in 2003, where we had about 30 or 40 artists come and do these kind of explorations throughout the weekend, and since then, that’s grown and that’s actually now my biggest project. Glowlab still does exhibitions and we’re working with a lot of artists that have come out from the Conflux Festival. So artists who have performance projects may also make drawings or paintings and we’re kind of keeping it all together in a way that includes both street-based works but also work that can go in galleries as well.

Monica Ponzini: Your next projects?

Christina Ray: We have an exhibition and an art fair coming up, both in March. The first is an exhibition of Glowlab artists, at the Leo Kesting Gallery in Manhattan, and opens on March 20th . The following week we’re doing an art fair that I help produce  it’s called the Fountain Art Fair and it coincides with the Armory show. It includes mostly Brooklyn-based galleries, it’s more artist-oriented, more like a group show than an art fair, and we have a lot of performances and special events. We then have other events, but our bigger event is the Conflux Festival in September, throughout New York City.

Monica Ponzini: Our concept of “space” has dramatically changed in recent years  we live not only in a physical space, but also in a virtual one. How do virtual space (and the Internet) affects our way of living and interpreting the space that surrounds us?

Christina Ray: Just from the point of view of the artwork that has been produced these days, the only reason that the Conflux Festival was able to start, was because the people who came to it, found out what everybody else was doing through mailing lists, forums – through the Internet basically. I knew artists in the Netherland and in London and in other countries, that I thought were doing very interesting work, we weren’t really connected in physical space, but we were online. So it was through these online media that we were able to say: “Hey, let’s get together in real space!”. It’s a good bridge and it helps bring the people together. Also, there are sort of similar concepts  I think a lot of artists that are using the streets are using them as an open platform, in a sense – this is a place where you can experiment, explore, try new things, make changes, just as people are doing with net art or other types of online media. Digital media are very flexible and allow you to get your work out through different channels, where the general public can see it.

Monica Ponzini: As you said, open fruition of public spaces can be compared to open source technologies: in your opinion, what’s the situation of these two aspects nowadays? Do you see any differences between the US and Europe or Asia ?

Christina Ray: I think I can speak mostly for what I see happening at the Conflux Festival, because that’s a time when people are coming together. I found that the atmosphere is very collaborative and open and we have artists that are really interested in sharing  sharing their techniques, sharing their projects, but also they ask each other for help, and it’s a very open environment when we actually get together. And I think that goes along with people interested in using open source tools for digital projects  there’s a lot of sharing going on, there is sort of a vibe at Conflux , it’s not really so much about the individual artist, it’s really about “What’s the best way to communicate with the community and with the people in the city”. So it’s often the case that you need more people to make those things happen, just as if you’re building a new software and you need the help of a developer community – I think there’s that open kind of sharing sensibility.