Koan01+ootchio: Landscapes From A Past Future 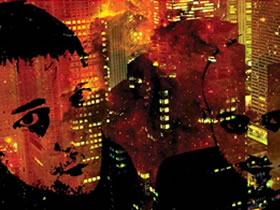 After three editions dedicated to great masters such as Cunningham, Glass and Bertolucci, the fourth edition of FUTURO PRESENTE festival opens up to the broader theme of the links between arts and new technologies: the legacy of the great experimenters, the dreams and utopias of the greatest twentieth-century protagonists revised and developed by artists who employ the latest technologies as lenses through which to observe and shape the world.

Around the MART and its striking dome, the festival gathered together many names of undisputed importance, what with artists and critics: from Derrick De Kerckhove to Maria Grazia Mattei, from Studio Azzurro to Joshua Davis, from Forsythe to Fennesz and Mouse on Mars  just to mention a few. The festival is an undoubted opportunity to reflect and sum up the situation of contemporary culture linked to new media.

A specific space was reserved to audio-video performances, with the overt intent to open a dialogue with experimental and avant-garde cinema. Thus, there was a whole series of site-specific works, as the one by Mouse on Mars, based on the images of Herzog’s Fata Morgana or the one by Christian Fennesz, whose performance rotated around Walter Ruttmann’s Berlin: Die Sinfonie der Großstadt , one of the greatest masterpieces in the history of cinema. In the wake of these artworks was also the young Italian duo koan01+ootchio (aka Massimo Vicentini and Salvatore Arangio) that, during the last evening of the festival, presented Sci-fi Landscapes , a live media tribute to sci-fi cinema and its ability to forcefully enter our imagination.

I interviewed them to have a report on how they welcomed the invitation to the festival and how they worked on the project, which is their first work together.

Giulia Simi: Sci-fi Landscapes  which was specifically developed for FUTURO PRESENTE  helped you starting a dialogue with sci-fi cinema. This dialogue gave life to an audio-visual performance of great emotional impact. How was your idea born and how did you work?

koan01: We can easily say that the creation of Sci-fi Landscapes has been quite hard, from the point of view of concept and, most of all, of development. As you were saying, this work was born as a production for FUTURO PRESENTE that, after the original idea of an elaboration of Lang’s Metropolis , took the form of a more extensive project on sci-fi cinema. The difficulty in managing a varied and boundless corpus such as sci-fi cinema forced us to delimit the field of research somehow by identifying a specific theme. The “future landscapes” theme (views, sceneries, glimpses) always fascinated me. While at the school of fine arts, I attended a media course, held by Carlo Branzaglia, focusing on how sci-fi cinema  and above all futurology  had influenced the techno-sociological development of contemporary society. This main theme developed in two strands, ‘interstellar space’ and ‘the city of the future’. The in-depth analysis of these two ideas generated real antithetical polarities (city: syncopated, rhythmic, pyrotechnic, neurotic, noisy//space: absorbing, dilated, melodic, droning) that later gave life to our live performance.

As for the realisation modalities, we divided the research on sources for areas of competence, meaning that Salvatore (aka ootchio, Editor’s Note ) screened sound materials and I dealt with video materials. We constantly discussed the results of our researches and ideas on how to put them together slowly started to come out. At the same time, we carried out the more specifically technological research, pursuing the creation of a very strict relationship between the unrecorded soundtrack and the real-time video, so as to obtain a whole series of situations where the video reacted precisely to audio impulses. As the first results from both researches started to arrive and ideas turned into blocks, we started rehearsing them daily. After a month of work or so, the first complete outline came to light and, after many changes and second thoughts, it took the finished form of the performance you saw.

Giulia Simi: Avant-gardes open and close your show, which is totally based, as far as images are concerned, on editing and live re-editing of movie excerpts that have forcefully entered our imagination. May we look at this as at a tribute to the utopias of the seventh art, born well before technological means allowed the hyperrealism perspectives that sci-fi cinema have broadly employed?

koan01: The idea of setting the show within Le voyage dans la Lune and Metropolis was an apt as well as obvious choice, meaning that many relations generated almost spontaneously. The first relation concerns dates: even though Le voyage dans la Lune can not precisely be placed within what we call ‘Historical Avant-Gardes’, its dating (1902) collocates it ideally at the beginning of the history of avant-garde cinema. Metropolis (1927), instead, is placed at the end of this period, a short time before the lights of nascent Hollywood and the politics of the Third Reich caused the expatriation of the majority of directors who gave life to this art movement.

The tribute to these two directors was unavoidable and due: Méliès is remembered as the pioneer in special effects and Le voyage dans la Lune is the first sci-fi film; on the other hand, Lang’s Metropolis inaugurated some of the main themes in science fiction (the automaton, the social control, the city of the future), which constantly return both in literature (Orwell, Dick, Sterling, just to mention a few) and in cinema ( Blade Runner , Brazil , etc.). Besides, the subjects of these two masterpieces are exactly the same we decided to deal with in Sci-fi Landscapes , i.e. ‘the exploration of interstellar space’ and ‘the city of the future’. By setting the whole show within these two movies, we want to say that the progresses sci-fi cinema made in the last hundred years or so were already potentially present at the beginning of the twentieth century.

Giulia Simi: We can find a tribute to avant-gardes in sound too, since there are references to great music experimenters of the twentieth century, from Berio to Xenakis. Therefore, from a crossmedial point of view, new technologies can be seen as tools to develop the dream of new modalities of perception and fruition of imagination?

ootchio: They are chief works in the evolution of musical science and taste, but they are also mostly unknown to general public, remaining prerogative of some “educated” elite. Recently, there has been a growing demand for this kind of music (by an ever wider and younger public), where the use of new technologies has overcome the traditional sound production systems. With the introduction of increasingly sophisticated devices (we passed from the phonograph to new-generation computers), new composers generated a very complex and unpredictable musical aesthetics, reaching amazing sound results. It was easy then to find a combination with the world of sci-fi cinema, for those very characters of complexity and unpredictability. Moreover, we had to express ourselves within an edition of the festival conceived around the relation between arts and new technologies.

The tribute to those composers who entrusted large part of their aesthetics to technological devices was almost due. More specifically, I sampled many fragments with different length, taken from the works of many contemporary composers and I overlapped them, making them unintelligible and often obtaining a musicality totally different from the primitive concept. I feel the urge to say that the tribute to these composers was paid not only through the quotations of pieces from different compositions, but also, and mainly, by means of the instrumentation and the performance practices I used in my electroacoustic live-set.