On Tino Sehgal: May a new ground flourish again?

During the conversation with the curator of the exhibition Luca Cerizza, he pretends to observe all of us, but the light is pointed on the stage and overshadow the audience. The eyes are concentrated and he waits for the questions to arrive, with the attitude of the top of the class. He opens his mouth and his English is easy and clear. Terms are adequately chosen and phrases are thought to be understood. He tries to explain himself with confidence, as a person fully conscious of what to say and careful, in order to not be misunderstood, to transmit the message.

At the expense of his clarity, behind his shoulders, is placed a fixed maxi-screen, where in real time, a bot translates from English to Italian. During the conversation sometimes he turns, halting his speech, just to look at it; the automatic translator approximately interprets, more than translate, his thoughts. It should be really frustrating -I think- for Tino Seghal, who pays attention to the oral message both in his life and his work, to see his dialog described in such a poor way by a disembodied mediator. Both bothered and entertained, he makes fun of the situation and tries to make sure that the names of the mentioned people and the most important steps have been reported on the screen.

The cubital pixelated letters create a discrepancy in the auditory experience, they bring the written background in front of the speaker, the artist’s contours fade while the eye loses its focus, trying to read the written words behind Sehgal. The artist takes advantage of the dynamic, he reveals it and makes fun of the screen integrating it into the discourse flow through physical gesture. He creates a tripartite boundary with the audience. The talk ends with one question from the public about the nature of the translator: human or robotic? 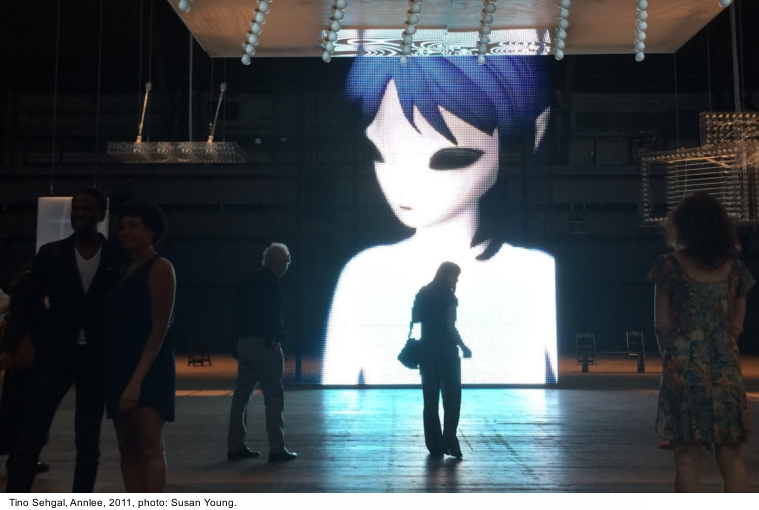 I rewind my thoughts. Two days before, during the exhibition conceived by Sehgal for the OGR of Turin, an “elven” appearance dancer strays from the group and start to speak: she tells of herself in the first person. She interprets Annlee, the manga feature bought by Philippe Parreno and Pierre Huyghe for the project No Ghost, Just a Shell (1999) and loaned to other artists, among them Sehgal, as empty “sign” to fill with new narratives. The interpreter, with a voice that imitates the digital one, explains that she is finally incorporated. Now she has a consistency in the real word, she can relate in a three-dimensional relationship with humans, as she always desired. «I just want to be an individual» she affirms.

Annlee (2011) is placed within the constructed situation, as a double experience entity, the one of immateriality and then of materiality, a passage we live on a daily basis when we log in our virtual self. The choice to give a physical body and not only a voice to the famous manga, may represent the faith the artist still has in human body, which double nature, pulsing meat and soul, is still half unknown in his mechanism, unlike the codex of virtual bodies.

The artist’s attitude towards the network and the new social technologies is not apocalyptic at all. In fact he moves his practice between the critic of the material production of art and transformation of behaviours through the immateriality of ideas. He appreciates the airborne, widespread and intangible form of virtual communication, he understands its driving force to connect the past to the present.

The decision to introduce Annlee inside the tangle of stories and bodies, defined by the artist as “swarm”, apparently humans, leaves the doubt about the identity of other interpreters. We could think that Sehgal’s bodies are posthuman, quoting N. Katherine Hayles (“How we become posthuman. Virtual Bodies in Cybernetics, Literature, and Informatics”, 1999): “In the posthuman, there are no essential differences or absolute demarcations between bodily existence and computer simulation, cybernetic mechanism and biological organism, robot teleology and human goals”. 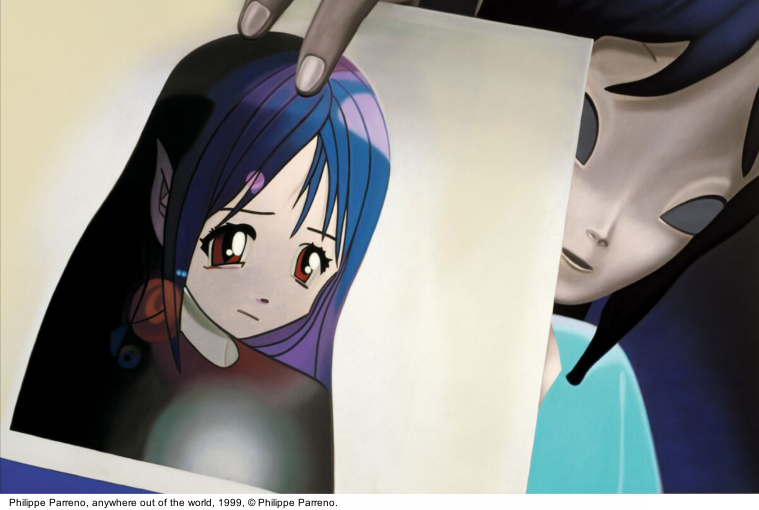 The question of information and consciousness disembodied, of their transplant from human to virtual matter, seems bypassed through the approach of digital form to the human imaginary. All the new technological achievements and the Holos are resolved in the divine “image and likeness”, data becomes flesh or takes on its appearance.

The Annlee of Seghal made me think about Sophia, artificial intelligence presented for the first time in occasion of the Web Summit of 2017 in Lisbon. It’s capable to process, has memory and reactive capacity. It’s the first robot, with shimmering eyes, to receive the United Arab Emirates citizenship. As planned, the Sophia phenomenon, rises numerous controversies about its ontological and social statute, principally about its resemblance, genre and function.

The young interpreter who personifies the neo-incarnation, just like Sophia, is genuinely happy to be surrounded by human beings, as if she was seeing them for the first time. She’s just born, in fact, before singing her song, she says she spent an afternoon with Sehgal’s son, who was less busy than his father and with whom she accidentally came across a book, the text is “Discourse on Thinking” (1959) by Martin Heidegger.

The German philosopher is aware of the loss of meditative thought, which made the man a being bound to a certain type of authority and morality. This kind of thinking has now been supplanted by the calculative one, part of the modern revolution, but able to free new energies and force from nature, of a different kind, compared to the resources we set ourselves as parasites. Calculative thinking has radically revolutionized our way of living compared to that of a century ago. 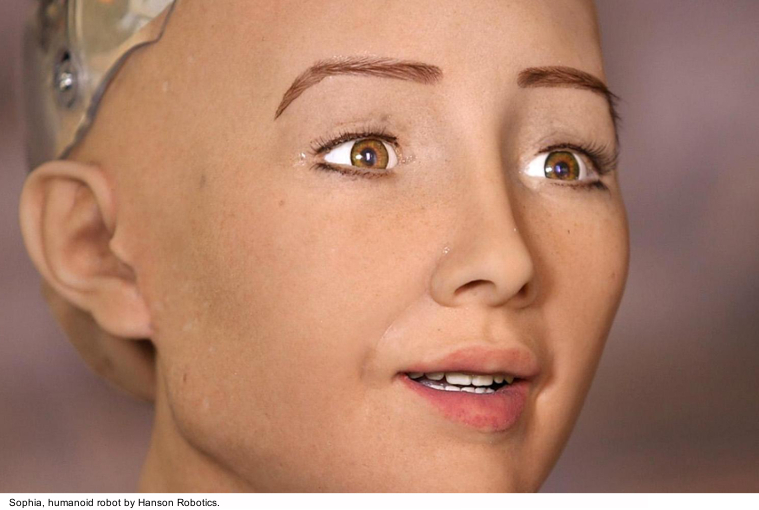 Roots, basic certainties, models and life goals have been completely eradicated. A global information system, a global economy, an increase in the demand to move and adapt to these changes at an ever-increasing pace, make it, according to Heiddeger, an expansion of the problem of rootlessness. The twentieth century sees computer thinking as an advent of the information age. Annlee quotes what was written: «So we ask now: if the old rootedness is being lost in this age, may not be a new foundation of the foundation and all of its works can flourish even in the technological age».

Sehgal tries to answer the question through his artwork. Annlee instead seems to invoke her necessity of dialog, contact and need to come back to the roots of oral communication, in order to create a sense of belonging for a new and hybrid generation used to the double experience of embodiment and disembodiment. The interpreters, fixed in a silent bubble during the monolog of Annlee, invited by the melodious tone of her voice, tune her same words in a harmonic polyphony.

The protagonists, of the time-based action conceived by Sehgal, narrate their stories by fragments, childhood or not so far in time memories, introducing a foreign scenario inside the amazed spectator’s imagination. They speak in order to become real and to verify the existence of their emotions and living nature. This sharing practice of bringing back memory as lively necessity should be in a certain sense the last purpose of art.

Interpreters chosen by Sehgal, march, collide, swirl lightly touching each other. They seem dancing or fighting in a loving courtship, they move air masses inside Binario 1, they communicate to each other by the gaze, sometimes are clumsy and they act like children still unaware of their body. Communication as a visceral necessity, sprouts spontaneously. The voices and the song insinuate, like a luminous trail, in the empty space which divides them. The voices and the singing invade the public, filling it. 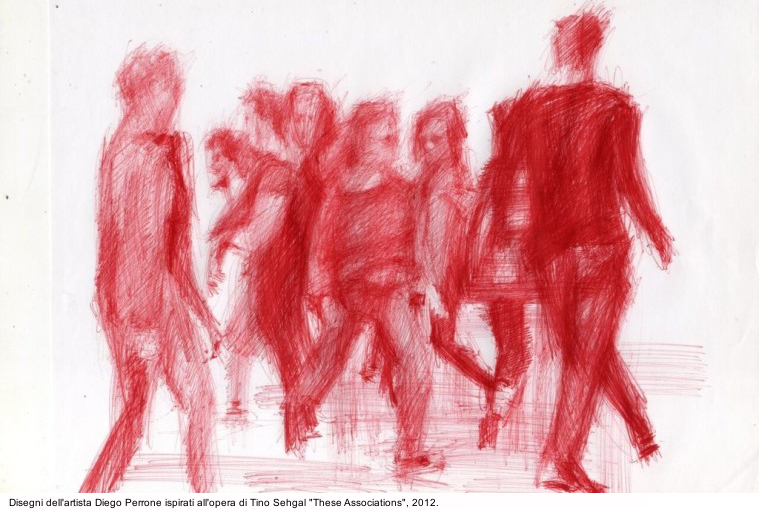 “Electric, electric, electricity” they suddenly invoke, coordinating the turning on and the turning off of spotlights that illuminate the axle room. I think about Marshall McLuhan (“Understanding Mass Media”, 1964), he thought electricity as the medium that brings back the oral and primitive communication through the use of telegraphs, radios, televisions, telephones. More precisely electric light was seen as a true element of change in the mechanisms of social coexistence.

Between lights and darkness, I keep in my mind a phrase: «Welcome to the cathedral of singing», I observe and I get involved with an overflowing emotionality. I mean cathedral as an ideological institution, secular place of aggregation, where people reunite to preserve a rite, the one of oral communication. The exhibition expresses the realization of a new one rooted in the archaic.

Bruce Chatwin, in his “The Songlines” (1987), narrate about the aboriginal population, who conceived the singing as map and nature’s élan vital “A song discloses the country […] it brings out it faster […] the earth formerly needs to exist as a mental concept. Then it needs to be sing. Only then we can affirm it exists“. The singing is a real landmark, but invisible to whom does not bring its heritage, it shines in silent nights.

Inside Binario 1 the bodies sing not just codify language, but they articulate beatbox sounds and animal verses. The sensation – to me – is to be absorbed in a temple where whale songs entangle the machine noise; artificial and biologic life coexist in order to spasmodically research a new place on the earth. The new contemporary human being, to understand himself, needs to sink in an earthy and electric soil, an amalgamation, a collection of heterogeneous elements, material and informal entity, which limits are moving in a continuous process of renegotiation. 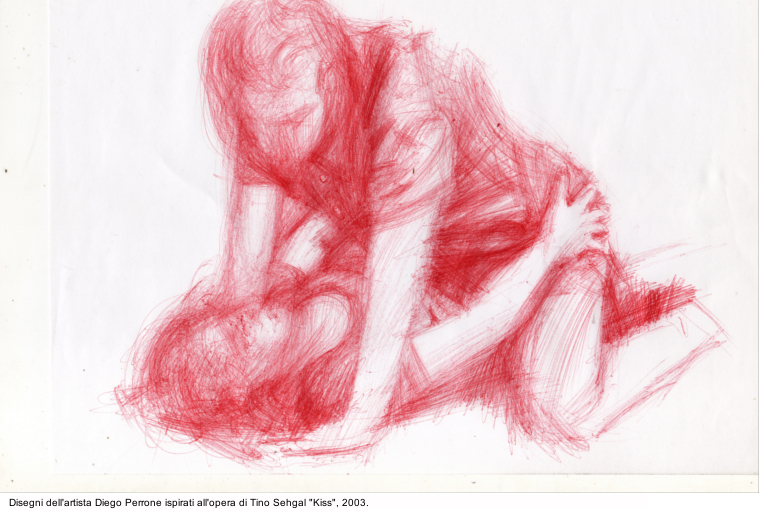 The posthuman human, in fact, doesn’t necessarily imply a cyborg or artificial graft, but the construction of a new type of subjectivity, whose freedom is alike to others wills of freedom. Highlighting this, I understood the indulgence of Tino Sehgal towards the disembodied translator, himself too new-born from contemporary technologies, needs to learn and interact with the human, and the human with him, trying to tell in his own way a brand new story.