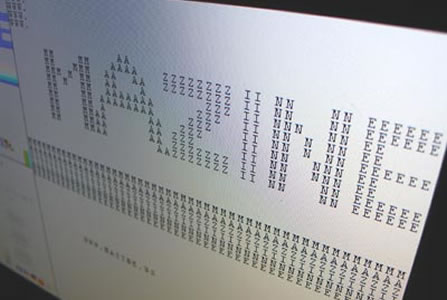 Political and activist art is the theme for the first exhibition in the autumn of 2006 at Mejan Labs. In a collaboration with the British organization Furtherfield we present a number of artists and organizations using technology to communicate a political message. The participating artists are Heath Bunting, C6, Kate Rich, Andy Deck and 0100101110101101.ORG.

Heath Bunting was one of the pioneers within net art but has lately more been working with different social and political based projects in Bristol. As a pioneer within net art among other things he sent out emails with false reviews, press releases etc. We will show a number of these early pieces in the exhibitions. For further Heath Bunting reading see www.irational.org

The artists group C6 will show their project Want & Need, a project where the audience can SMS their wants and needs, which will be screened in the gallery. They question if people in general aren’t mixing up they actual needs with what they want to have.

Kate Rich shows Feral Trade where she trades coffee over social networks. Andy Deck shows Glyphiti where the audience participate through drawing and interacting with the software over Internet. Eva and Franco Mattes (0100101110101101.ORG) shows their project vaticano.org where they published a new version of the official Vatican web site.

To the exhibition Furtherfield produced the film 5+5=5 which will contribute to the context of the exhibition. Participating artists and film makers are Mongrel, David Valentine, Chris Dooks, Furtherfield, Michael Szpakowski, Simon Poulter, Anya Lewin, C6.