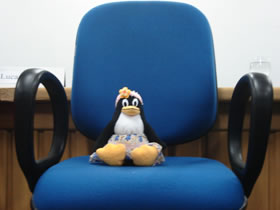 One of the innovations brought about by the digital world is the restructuring of the process of creation/production according to an open system whose functionality is represented by free software. Free software is the basis of the first free and widespread non-property net in history. Thanks to the overcoming of the binomial producer/consumer and the transformation of the product into process, an open and interactive relation between developer and user is created, with its potential of infinite new opportunities of production and creation.

Those are some of the concrete and theoretical concepts of ‘Estúdio Livre‘, a Brasilian network of artists and developers of instruments and works based on knowledge sharing and open source. The project’s structure is a network of people sharing the same goals and methods for creative work and its development.

Their logic goes beyond rationalism, rather than being dualistic, it is diffused. Their reasoning reflects the approximate and inexact realities we experience. Though there are hacklabs and labs scattered around Brasil which are a tangible manifestation of the project, it is important to remember that Estúdio Livre is neither a real place, nor a group of places; rather, it is an applied philosophy, a conceptual and political attitude realized through an active and revolutionary way of working. Freedom and independence from property is achieved through the positive re-appropriation of technologies. Thus the idea to create a virtual structure that can give both concrete and technical support to artists and facilitate their gathering into communities.

Estúdio Livre offers a web site based on the CMS (Content Management System) TikiWiki extended with custom Php modules to ease publishing from the web and backing up to local servers. The site is easy to use and offers sections and tools for self-publishing: blogs and homepages; chat systems included in the browser; documents and shared databases for example ‘acervo’ (which means quantity) where media are published and shared; also manuals, translations, patches, scripts and various softwares . The platform supports dialogue and discussion and provides available materials within the group. Anyone can create their own account, provided they are responsible for the contents and respect EL principles according to a clear editorial policy. Beside gathering resources and dealing with communication online, EL organizes a series of events called ‘ Encontro de Conhecimentos Livres ‘ involving the network of hacklabs, laboratories and workshops spread over the Brasilian territory. During those events both experts and newcomers to digital creation meet for approximately a week to improve their skills and produce, by experimenting, new free content, with a particular attention to recycling and the intelligent use of what is called obsolete technology (materials and documents about those meetings are available on the site).

EL has been supported and financed both by state or semipublic organizations such as ‘ Pontos de Cultura’ and ‘Cultura Digital‘, according to a Brasilian policy which firmly supports and promotes free software.Today, after three years, with the decrease of public funding, this group of people has decided to meet and discuss, not only to make up new strategies and common prospects, but first of all to find out similarities and differences and to wonder about possible crises. In order to define their identity and find a clear common line, in spite of the risk of loosing their cohesion, ‘Estúdio Livre’ network decided to meet and think, so that the abstract assumption can be incisive and crucial and can define and modify the real world as well as the common and cooperational methods.

On 6th, 7th and 8th September the first Estúdio Livre plenary meeting took place at Taina culture house, in Campinas, São Paulo. During the meeting the following common concepts took shape according to a division into values, principles and lines of action: the values are freedom, cooperation and difference; the principles are the free software philosophy, the diffusion of knowledge and learning and the compound relationship between art and technology, artists and programmers. The lines of action are interconnection, research, production and workshops.

Estúdio Livre decided to reorganize its structure and take on a strong social responsibility in the so-called “phase 2”, deciding to become a sort of licence (also because of not being very convinced by Creative Commons). The group will keep a cohesive identity and a legal entity, but will no longer accept nonspecific funding as Estúdio Livre or similar names unless an effective plan for distribution and decentralization is drawn up. The access to the list is public but initially moderated; an mail introducing oneself is appreciated. The group is willing to set down plans for self-sustenance independent of possible financial helps.

An interesting proposal in that direction is, for example, the idea of opening the code, in case the software is sold, after the purchaser has paid a small sum to reward the programmer and finance the free community. Thus the awareness, and intuition, that FLOSS software is more convenient and manageable even if considered inside commercial dynamics.