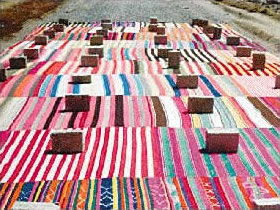 Brumaria is a six-monthly magazine that was founded in Madrid in 2002. It is an artists’ project, a militant editorial project that reflects on the fertile boundary ground among artistic, social and political practices, with an engagé and maybe old-fashioned view, which in a period of post-post cultural and political relativism really makes a big impression.

It is enough to read the tagline of the magazine to be taken back to some decades ago: ” our objective is to circulate theoretical/practical materials relative to artistic and aesthetic ideas and their relation to the inherent social and political structures “. In ten publications, Brumaria has talked about globalisation, spectacularisation of the information, net art and artistic practices connected with networking, art and revolution, art and “radical political imagination”, video art, chainworkers, Avant-garde. After three issues dealing with more general topics, Brumaria started to publish thematic editions, each of which is focused on a specific topic and edited by a specific editor.

Above all, Brumaria has given space and voice to theorists, critics, sociologists and artists who are not only from Europe and Spain , but who come also from different countries in Latin America . They form nearly an unicum in a context where the postcolonial theorists have found editorial space, since the Nineties, only in the most institutional field of Art with a capital A (it is enough to think about projects like “Third text” or “Atlantica”) or they have been totally ignored in the context  nearer to us  of media, activism, mailing lists, which have always been containers of practices and studies that are, however experimental, Eurocentric or USA-centric with sporadic and disorganised forays into non-western fields.

The issue 10 of this magazine, which came out some weeks ago, was entitled “Video en Latinoamérica. Una historia crítica” and was edited by Laura Baigorri, a Video lecturer and Media Arts and Net Art curator in Barcelona . The publication is a survey that is very near to the academic research and to the creative writing on video art in Latin America, and it includes some texts of artists, editors, theorists and writers coming from a different country in Latin America and dealing with the history of video art in their country.

Argentina, Mexico, Venezuela, Cuba, Central America, Ecuador, Peru, Brazil, Bolivia, the diaspora in the USA. Each essay restores the ranks of a context of experimentation that is poised among cinema, video, documentation and media, dating back to the Sixties and arriving at the most contemporary practices.

As Baigorri explains in the introductory text, Latin America has been widely forgotten by European and North American historiography, above all as far as the history of the Video and the experimentations after the Second World War are concerned. There are several partial histories that were written in a militant way in various Latin countries, but there is not any complete general reflection that takes stock of the situation and legitimates a history that is parallel and certainly not a copy of the European and US-research in a rumba/salsa/cha-cha version, written by the poorer and less lucky brothers.

Therefore, this history is completely shapeless, incoherent, wide, probably written in a partial way by people that are, at the same time, producers, authors, experimenters and they have lived a part of this history. However, it is exactly this width and this search aiming not at giving an abstract and univocal, but a rather branched, diversified and non-homogeneous line that makes this work a real attempt to create a realistic panorama of conceptual differences and distinctive features of the creative processes of the continent.

However, to build a synopsis that reveals one “Latin” soul is a naïve utopia of western people, who often think that they can do the same thing with a bit exotic continents, like Africa or Asia , for example. However, is not trying to give a definition that joints all the different European histories and cultures as much naïve?

Exactly the will not to segregate oneself causes the work to play on the “diversity” of the Latin American video in comparison with the western one. In fact, the stories that Rodrigo Alonso, Graciela Taquini, Lucas Bambozzi, Raul Moarquech Ferrera Balanquet, Fernando Llanos, José Calros Marategui and others narrate show that Latin America is unique because of its relationship with Europe and the USA, of its colonial history, of its postcolonial history, marked by violence, exploitation and military dictatorships, imposed by external political powers.

Therefore, far from looking for a local uniqueness, however non-existent, the book shows how in each country in Latin America the history of artistic practices was marked by the constant awareness of what happened, at the same time, in the rest of the world (a feeling that is totally unknown to western people) and by a continuous attempt to build an interior and local network that gave voice to the urgent need of communication of that place at that particular moment.

It is a comparative study of contemporaneity that always refers from the interior to the exterior and vice versa, that was carried out throughout the twentieth century by artists and intellectuals in Latin America and that was thus traced by the protagonists of the history of the video art on which Brumaria focuses. Such way of conceiving the present, which always focuses on keeping the awareness of what is happening locally and around the world, as we can see, is something innate in Latin American culture and it arrived only a few years ago in the European and North American academies and research spaces as a form of theoretical avant-garde in the way of conceiving and narrating the history of modernity again.

At the end of the book there is a very rich and precious bibliographical study including a list of websites, an essential instrument for finding out something more about names, exhibitions, movements and spaces.

It is important not to forget “Iberoamérica Act”, a Latin American mailing list for the discussion on art and the media, a space around which the relationships among the many contributors of this work has formed.