A Collective Resounding Body. Aiming Towards An Auditory Tactility 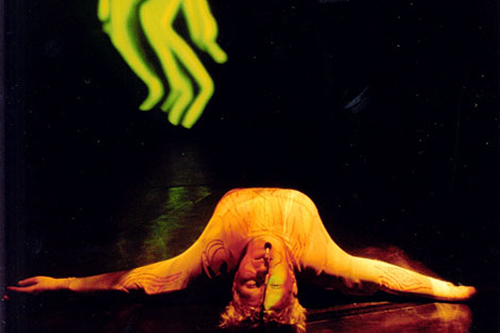 Among the more interesting figures on the international circuit, the choreographer Isabelle Choinière has been developing a journey connected to sound qualities in movement for many years. She founded and currently directs the Corps Indice of Montréal (Canada) company with which she develops research projects on the relationships between dance and technologies.

From 1995 her creations have been present in many international festivals: in France, Germany, Denmark, Brazil and the USA. Among her main bodies of work are Le Partage des peaux I (1994), Communion (Le Partage des peaux II) (1995-1996)  La Démence des Anges (2002). Alongside her work as a choreographer she also works intensely in research: her texts have been published in 2008 at the University of Applied Arts in Vienna. In 2009 one of her contributions appeared in the book Point of being by Derrick de Kerckhove, director of the McLuhan Program of the University of Toronto. In 2006 she began developing a new project called Meat Paradoxe dedicated to the concept of a collective resounding body, working in collaboration with the French composer Dominique Besson.

We are currently in an epistemological passage point which marks a real movement in the scenic arts and that primarily regards the role of the performer favouring other  plural  manifestations of their physicality.

This break passes through a relationship that the contemporary scene has initiated with technology: here we will look at a particular aspect, specifically interrogating the definition of scenic soundscape derived from the movement of the performer in the work of the Canadian choreographer Isabelle Choinière.

It is here that the concept of “resounding body”, which is at the centre of this intervention, takes on meaning as an audible expression and manifestation of the relationship that movement and perception create with sound. The resounding body does not look to something that is simply anthropomorphic, the sound reconstruction of the shape of the body is not an issue: the investigation of the issue of “resounding body” – a voluntarily ambiguous term  means to penetrate into the matter of sound and at the same time, of the body. It means to operate inside a fine limit where the shape of the body and sound are dissolved leaving a plot made up of different intensities that operate within it: we will therefore speak of a “molecularised” form of the body and sound that resonate with each other. In other words, it means to work on a series of internal tensions that allow the shape of the body and of sound to be in constant mutation.

II. Toward a collective resounding body

To come close to an initial manifestation of this relationship between body and sound, we will cite the work La démance des anges (2002) by Canadian choreographer Isabelle Choinière where thanks to technological means, the presence of the body is extended to a different place to where the performance is physically taking place. Two different spaces and two different bodies live in these two different spaces. Two dimensions of presence are in relation with each other inside the same physical space: a physical body of the performer and a “synthesis” body that is “present” as a projection. This way the dancer who is physically present sees her performance replicated in the image and the sound track of a second dancer (spatially collocated in another place, even in a different continent, if necessary) transmitted by a MIDI data system via the internet. Therefore in this case the resounding body is the result of an encounter between physical and material bodies, spatially distant with reciprocal projections.

In other words the voices and gestures of the performers are captured by a series of microphones and sensors that are positioned on their bodies, and this data is transferred simultaneously into the space of the performance and on the net to form what could be defined a long distance duo. It’s as if the two performers generate and exchange sound and images in real time, which come from the composition of movements producing a sort of net-like persistence of their image in the spectator. We can therefore see and hear every performer, present in the space of the other. This process is an invitation to a reconfiguration of the perception of the performer in relation to action and creates an overlapping and confusion of real dimensions.

In order to create this aspect of the performance, the two dancers have captors capable of capturing the sound qualities of gestures that are executed and attribute an equivalent to these on a sound level through a synthesizer.

In order to create this, the choreographer had to develop a series of particular sensors to be applied to the body. The need was to elaborate captors that restored the possibility of composing and capturing a movement in a decisively more subtle and slow way, and at the same time allowed to intervene on the opposite diametrical quality, in other words according to a dynamic of acceleration or fragmentation of the flux of movement, so as to compose  in the space of the scene  a real auditory space that interrogated the perceptive asset of the performer in action and the audience’s method of perception.

The resounding body that transpires from this is something that comes from the real body, but is not a double of the body, but rather a manifestation of it, a new sensorial organisation of the perception developed from a technological integration. Technology becomes a way to interrogate the potential of the body in this work, to develop a kind of depth of perception of physical knowledge in order to act on it so as to modify the score of movement constantly (and it’s sound declination). It’s evident that, in this case, we are beyond the pure instrumental use of technology. Technology becomes a way to investigate the body and expand its potential (1). Thanks to this particular use of technology  where technology becomes a way of thinking about the body  the choreographer works by integrating the sound dimension.

III. Placement of the resounding body

By pushing this process of work connected to sound, it is in the Meat Paradoxe (2008/10) project that Isabelle Choinière developed a concrete and radical vision of the concept of the resounding body. Thanks to the collaboration with the French composer Dominique Besson  among the figures who generated software of sound specialisation of movement called Ring  the choreographer developed an organised system around the capturing of the sound of five different dancers that  composing their movement in the space of action like a real sound mass  produced what we could define a collective resounding body, inside which the dancers could feel a shared sensorial experience, on the level of movement and on the level of sound production in real time. The elaboration of a soundscape responds to the mass-movement of the performer on stage, of an intense graininess that seems like a cloud of sound, a dense and articulated atmosphere of sound particles.

In this sense the “resounding body” recalls a dimension of the body (or of movement) that originates in real time starting from the movement of the dancers on the scene and it is inscribed in a context of broadened choreography that the choreographer has been developing for some years now. The “resounding body” is, in other words, an emanation, a dilation of the real body into the shape of sound; it is a vibration. The body becomes an eardrum, a resonator of sensorial dimensions that becomes scenic sonority. Therefore the body is almost molecularised, subdivided into elementary particles and recomposed in the shape of sound. Once again we are outside a purely logical formality of gazing at the body; the intensities  its articulation in movement-particles  are at the same time part of the choreographic and research work on sound thanks to the alteration and modification of different frequencies.

What is extremely interesting, in this perspective, is that by working on the resounding body it is possible to intervene  to renovate it  on sensorial aspects and the perceptive arrangement of the performer. This leads to the abandonment of ways of composition that have already been experimented with and opens up to a gesture that is in continuous transformation and, therefore, to a scenic sonority enriched and redefined each time. It is here that the sensorial aspect is reorganised and the internal part of the body becomes a medium. It’s as if sound, in this project, plays the role of an added dancer: it participates in the organisation of the “collective resounding body”. Just as Dominique Besson underlined when speaking of Ring software used in this process of the work: “The Ring is oriented toward a direction of open system of specialisation in real time of functions of gradual memorisation of the signal and its trajectory. Interfaced as entries in the Ring system, the sources of sound generated from the dancers become manipulable in space and time”(2).

Thanks to the placement of sound obtained via a device consisting of 8 speakers in the hall, the spectator is projected inside the body of the performer, and at the same time, is induced into a radical rethinking of his or her sensorial arrangement. In other words the spectator is very close to the body of the performer, in a proximity that induces him or her to a “tactile vision” of their bodies in movement. The spectator is immersed in this living form. He or she is inside the form, in contact with the intensities that animate and sustain it; inside the flesh thanks to the sound that moves around him or her, that crosses and ploughs through the space. Therefore there are two forms that his or her perception is not used to and that must be redefined.

IV. Toward an auditory-tactile perception of reception

We can speak therefore of a tactile aspect of the working of sound. The sound elaborated according to the strategy of moleculerisation and spatial disposition operates with very high and very low frequencies and tends to articulate itself through a continuous wavelength that installs a constant relationship with the bodies that are listening. This proximity between the body of the performer (visibly or auditorily) does not however take the audience into a situation of extreme sound: the communication passes because of the different chromatic levels of sound, different levels of vibration. The spectator is therefore immersed in the continuous vibration, of a segment of sound as a gesture, and it is on this scale of variations that the attention must fall. What is being affirmed is that the parameters that the spectator must put into action are not simply optical-visual or auditory-sound, but the process of composition of the choreographer Isabelle Choinière requires a synaesthetic glance and mode of listening, an active and contemporary relationship of the senses. It’s necessary to configure the bodies in another way in order to receive these signals. It isn’t enough to have eyes to see the invisible or to have ears to ear the inaudible.