The Archimedes Project Insists On The Net 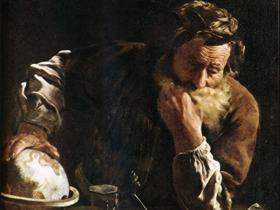 It’s singular how often the real experiences of the net are neglected from the public to the prejudice of intangible theories which predict whatever paradise in internet and in its social sublimation.

One of the cases of unjustified inobservance is the Archimedes Project a part of the Digital Libraries Initiative Phase 2, a National science Foundation program, supported also from the Classic Department of the Harvard University , form the Max Planck Institute für die Wissenschftsgeschichte of Berlin and many other American and English departments. An institutional net combined with the academic network of the Program International de Cooperation Scientifique (PICS) makes the digital initiative very important in the international scenery.

He project is an open digital library which picks up the most important and popular works of the mechanics. The mechanics is now a part of the physics, it was born from philosophical intuitions and speculation already among the Mesopotamian, it has a mathematical basis in Archimedes and in some theories of Aristotle, and it become the major protagonist of the scientific thought with the fundamental laws of the physics which studies the body movements and the actions of the forces thanks to Galileo and Newton. The Max Planck Institute for the history of Science puts disposable a great range of texts which go from the II millennium B.C. (the prehistory of the mechanics) to the Renaissance Aristotelianism. But it is foreseen an enlargement of the classical mechanics with the new coming of the quantum mechanics and of the theory of the relativity.

The temporal subdivision focuses on science as a practical knowledge rather than on the culture as an identikit of old civilities such as the Mesopotamian, Ancient Greek and Chinese civilities, the Arabic and the ancient Latin world. Many innovations were discovered during this period and their practical applications are inestimable: from the navigation to the armaments, from the building to music instruments.

The great digital corpus will remain an inactive subject if it would not be submitted to a new empirical validation. This is possible thanks to “an open system of consultation” which makes the same texts productive again by the made research. At first the informatics model MPIWG (a software used by projects such as European Cultural heritage Online, ECHO) records the researched words taking from historical vocabulary, encyclopaedias, memories etcthe potentiality of the search engine (Donatus XML-RPCI interface) is in the opportunity of making a morphological research: there’s no need therefore of complete scientific words, but the etymological roots are enough in their variations. In this way the great linguistic problem created when we connect classic western texts with the Arabic one is limited (this is an essential source for works with a different system of writing and for the rediscovery of the Greek originals, because they are often the last translated left works).

The results of the research are only a starting point for a next revision. The project, in fact, beyond the already hinted database and search engines, offers a great user agent of organization; that is an application for the notes of XML texts, which allows the users to work with parallel versions of texts (supported with Latin, Greece, Arab, Chinese alphabets, written also in cuneiform) in order to redefine the path of the searched scientific concept for priority, similarity, deviances or parallelisms; we can do it simply entering some metatags to better identify some links in comparison with others.

So new conceptual maps are created each time (the so-called Archimedes Bundle) which in their sedimentation (there are primary bundles with a more durance to the reconfiguration and secondary bundles with a more flexible structure) they are able to reflect the mind models of the mechanics history by theories and scientific practice which accompanied the work of the classics. These technologically redesigned structures of thought can explain better how some forerunner phenomena of the scientific theories and discoveries were possible, for example the atomism, already discussed in the Ancient Greece still before there was the certainty of the existence of the atoms. At the same time the conceptual maps could also explain how the mechanics became a key element of the social productivity thanks to the production of complex architectonical works or machines also without the current scientific and technological knowledge.

The tasks of using such a model of digital library are simply and noble: the humanistic students above all of history of science should work with the flexible and accessible interfaces. The taken way is the linguistic middleware, metasoftware (or user agent) which is able to make different software communicate with each other to exploit the potentialities of different applications which have to deal with a mixed property of linguistic data.

But the results don’t limit only to the development of the interfaces. The research, the diffusion and the increasing of the knowledge remain the first aim: in the same way we try to go on working in that collaborative way of the scientific practice in the web and that is possible thanks to the realization of a communicative system of texts, which allow multiple semantic links (and not unidirectional as the traditional one) the contemporary creation and consultation of contents (and not a rigid separation as in the current website) and an exchange method of more fluid ideas, where every students can communicate with the others who work at a similar project.