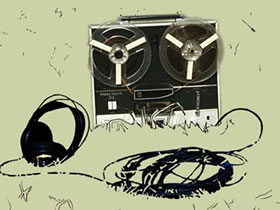 The night from 6 th to 7 th May 2001, Kenneth Kirschner, an American composer popular for his experiments of random-infinite reproduction of the sound, hangs around in the districts of New York with his equipment for the audio reprise searching new inspirations for his works.

From the gained material, which contains also an important document of the places of the Manhattan Financial district, was born a new cd titled May 6,2001. The work contains 5 tracks for as many interpretations, all obtained by the same material. It was published the last September by And/Oar, a label founded in 2002 and famous for the field recording lovers. This label focuses its productions on audio-reportages documentations, environmental recordings and sound minimalism with a particular attention to the aesthetic and documentary implications found in these techniques of audio reprises.

The acquisition of the sound exteriors (but also internal, we can think to medicine) can use different equipment, more or less professional, used for example in the journalism and in the cinema, from putting together of microphone, headsets, portable recorder (or computer) to the use of particular contact microphone (for example on walls or for the interceptions) and auriculars, and up to the choose of instruments for the scientific research such as hydrophone, geophone and so on.

The concept is very simple: to obtain the sound. We can do it like we want and according to the quantity of delight we have: if we digit on Google the word “belch”, for example, we have immediately access to a large library of recordings, which document the digestive activity of unknowns. The range of products for the environmental recordings is very wide and the fantasy with which these can be combined together is almost infinite. It is demonstrated also by the spreading of the field recording in Italy , which is often played with common instruments such as portable minidisk, walkman, digital cameras etc..

Leaving aside the concrete music or the use of the tape in the so-called cultured music, where the use of the without artistry produced audio material is rather clear, we consider the electronic pop musical productions of the last years.

Here the field recording is often used as a material, which needs digital processes with a software and in the most part thought as a particular sound effect: a type of background or indiscriminate complaint, which, mixed with other media, is able to create random and unexpected connections which make a composition, a track, a song more rich.

So many disks, which made the history of the pop or folk music, can come in again as of rights in these categories; it’s enough to think effortless to the presence of the environmental recordings in the first and then in almost all the works of the Pink Floyd (motorcycles starting in Atom heart Mother, birds of the paradise in Ummagumma, breakfasts in Los Angeles, up to the crowded cellars in The Final Cut). It is often a descriptive use of the recordings in order to create an effect of almost visible identifying of the listener in an established context.

Thinking, instead, to labels as Folkways, engaged from decades to document and collect the changes of the sound in the natural and urban settings, we notice moreover that there is a restricted art of the field recording: to go out from home, travel, listen, and capture sounds. But this is only an issue of method and at the end what matters is that in the music, since there were invented instruments to obtain the sound, nothing is never new, in comparison with authority and with records. By luck!

If we combine the field recording with the right philosophy of the Open Source then the trick is done! As Blanchot would hope, we could see the disappearance or better the depletion of the author, that is the subject which perceives the work (his object) as a product of any original, intellectual activities (I’ve made it!) rather than as the revision of a material already given. And this is also worth for the instrumental music if we consider the idea of type.

In each case And/Oar proposes interesting works both for music lovers and for the simply snoopers who want to let themselves with the ears into geographical differences. An example is the Marc Behrens and Paulo Raposo‘s work released in October, who shot Lisbon (sound city already evoked by Wim Venders in his film Lisbon Story) travelling on ferry boats and creating a very suggestive portrait of 23 minutes.

May 6, 2001 contains five interpretations which start from the same starting field recording. Beyond the Kirschner’s one: Taylor Deupree, Tomas Korber, Ralph Steinbruekel and Aaron Ximm. Each interpretation seems particularly inspired in the intentions and suggestive reflections merge also helped by the use of musical instruments, refined equalizations, cuts, overlapping or juxtapositions of simple and manipulated parts.

It’ s possible to download from the website of And/Oar the mp3 with the simple version of 46 minutes at low resolution and the editing (according to me it’s very beautiful) realized by Kirschner based on that material: the resulting portrait is a deaf and devastated urban landscape, made with far and deep echoes and marked with little sprays of stream which unveils the geometries of the buildings.

The street, the offices, the great metropolitan spaces are in a strange atmosphere; it is uncommon in comparison with the comings and goings and the industry which animate the Financial district at that time: it’s normal that the American critics were stroke by the similarities of that silence with the current silence in Ground Zero.