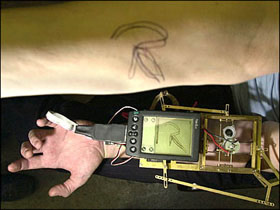 What is natural and what is artificial? What characteristic does this distinction take on today, if there be one possible? What can Man do facing a nature that is escaping the reductionism model and in which Man appears more and more of an exception?

Set to find an ample definition of these two terms seems to be laborious and risky task and perhaps sterile if abstracted from the awareness of a universe in progress that does not lose its mystery in the typical attempt of our scientific and humanistic discipline to dominate or to understand. This seems to be the conclusion reached by Riccardo Notte, in the light of a fascinating study conducted on one of the biggest ultramodern myths with the provocative title: You, Robot, antropologia della vita artificiale (You, Robot, anthropology of artificial life), in which the origins of a contradictory archetype are faced with shrewdness and scientific rigour, at times unnerving, passing from robotic artificial intelligence, with an acute glance that joins scientific research and philosophical vision, anthropological analysis and sociological study.

“The robot in fact is an image full of connotations which are not always unequivocal. Its shiny steel skin, its super human electric “blood”, its striking mental ability not polluted by vices, by passion or by intentionality, that orientates actions into good and bad, display a way of being comparable to semi divine conditions. In a more than a century of imaginary robotic history it has gone from the “substitution machine” to “the pre-figuration of a new evolutionary stage of humanity”.

A due reflection, in an epoch that inherits a technological make-believe populated by cyborgs, humanoids, mutants. and from which translates in part the results without however being able to foresee the consequences. A truly real metamorphosis, a promise or a threat having in any case epochal traits. The future robotised humanity is, when all’s said and done, a diffused perception, and there are those who with authority take such a transition for granted, while robots proliferate in factories, in toy shops, in laboratories, in homes, in the streets and in the media. Biorobot, gel-robot, mini -robot and insect-shaped robots that swarm; all this lets us suppose that the twenty-first century will be a time of integration between man and robot. But not without doubts.

In You, Robot the author moves from the analysis of the cybernetic program to demonstrate that it aims at redefining the fundamental laws of the human being. The expansion of the artificial seems in fact unreasonable without a preventive “artificialisation” of human relations. But what about the purpose of alteration of pre-existent cognitive and behaviour patterns? And what about the social and ethical effects? And why, have, for some time now, writers, philosophers and artists that are set in the myth of the artificial man, been sending worried messages, that deny the intense ideological activism of the techno-culture?

A well known school of thought states for example that organic and technological life are forming a new and superior synthesis. Even though the evidence of facts demonstrates the contrary: ontological discontinuity of the artificial is insinuated in the network of living beings and it shatters its connections. The only compatible relation, if any, is the artificial network, widespread around Man as a concrete psycho sensorial habitat, thrown into an impassable deep future. Also in this case the separation from the natural planetary network is the announced destiny, already in part put into practise and paid for at a high price.

Actually, part of the charm of the robotic simulacrum, punctually amplified by popular cultural products, comes from the myth of escaping from the ephemeral chain of existence; it is the project of a singular, ambiguous “dynamic stasis”. The robot, anthropomorphic emblem of artificialisation, can seduce because it promises a new strategy of immortality. Science fiction literature (but not only), and then comics, the theatre, the cinema and the arts have modelled for more than a century the various senses in which this original intuition was articulated. Many unaware projections classified by the author, illuminate expectations and fears that come from the progressive artificialisation of the human: the contemporary form and future of dehumanisation.

In conclusion, the robot synthesises a peculiar escape from “earthliness”, but governed by technology. Furthermore, robotisation of human relations promises a new paradise, a new utopia, an aspiration that would eliminate instability, incoherence, uncertainty, undecidebility and the togetherness of fluctuations to which the present-day is subordinate, on the point of shipwrecking in limitless human marginalization .

The artificial man, is the oneiric image of a half human being, virtually stable, whose presence becomes a new centre and a new circumference in the world multiplied by the more or less infinitive capacity to expand itself, to probe, to decentralise the work of the sciences. Artificialisation expresses all the strength of this tangible utopia, and acquires its own indefinable but unnerving charm every day that goes by.

The author: Riccardo Notte (Napoli, 1958) teacher of cultural Anthropology at the Academy of Brera , in Milano. Moving from his first research into logics and epistemology, under the guide of Michele Malatesta, at the University “Federico II” of Naples , since the end of the eighties he has been investigating into social, political and cultural falls of new technology in communication. Between 1988 and 1995 he was writer for the two-monthly “Mass Media”, and he has collaborated with various Italian and foreign periodicals. Intense, at the same time parallel, his experience as art critic and art historian and numerous collaborations in the organisation of exhibitions, among which XIV Quadriennale of Roma. And author, among other things, of ( Millennio virtuale ) (Roma, 1996), La razza stellare (Roma, 1999), La condizione connettiva (Roma, 2002) e di You, Robot. Antropologia della vita artificiale (Firenze, 2005).