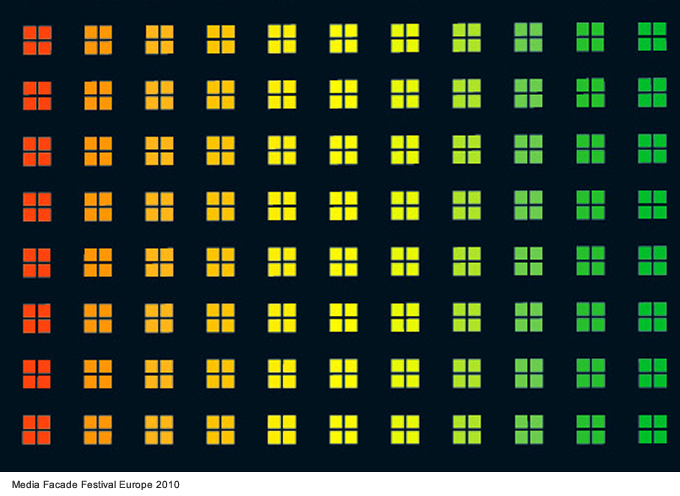 In September and October 2010 the first edition of MFFE (Media Facade Festival) began, a European pilot project featuring the participation of different digital artists and designers. The festival is organised by the Berlin Public Art Lab, in collaboration with the artistic centers of other six European cities: Liverpool, Brussels, Helsinki, Linz, Madrid and Budapest.

The festival represents an opportunity to create a network of “Urban Screens” in the various European cities, linked among them through the use of new technologies and the internet. Its primary goal was to investigate the communicative function of the urban spaces, despite any commercial exploitation, through the creation of digital facilities, inside the cities’ public spaces, on which visual and creative elements are projected. Digital image and public space play a key role here.

The artistic events hosted by the seven cities were then simultaneously broadcast on the Web, in order to create a virtual creative space in common to the different locations, where one can share thoughts and creative projects. 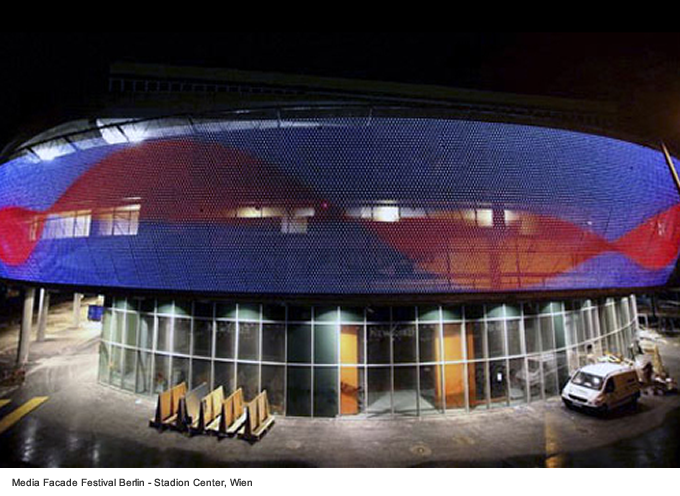 The video images projected within the cities are capable of turning urban elements into screens as well, such as windows or public and private buildings facades, thus making the public space artistic. Thanks to online streaming, the events become up-to date in every location.

The idea of connecting seven cities utilizing the “Urban Screens” was selected by the European Commission among the best German projects of the 2007-2013 cultural program. The festival was therefore meant to create a structure-community where artists, artistic centers, cultural operators, governmental authorities and private companies had the chance to interface each other with the public in a communicative and creative way, thus producing a new media format of cultural communication in the public space.

During the first European edition of Media Facade Festival (MFFE), which took was born out of Media Facade Festival Berlin 2008 organized by Susa Pop (Public Art Lab) and Mirjiam Struppel (International Urban Screens Association) from Berlin, we have interviewed Susa Pop herself, the artistic director of the Festival, who is also currently the Managing Director of the Berlin Public Art Lab. She has always been interested in the production of creative communities through projects of networking art within a urban context, exploiting the virtual advantages offered by digital arts and new media. 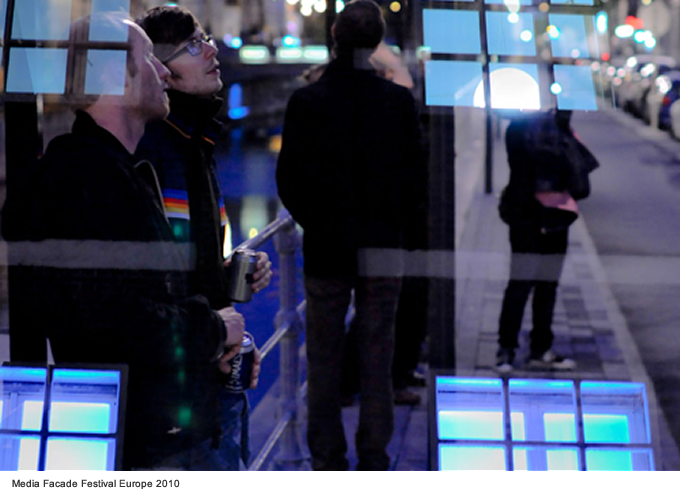 Silvia Bertolotti: How did the idea of MFFE come up? Was it linked to your past personal experience or rather to your current work activity at the Public Art Lab?

Susa Pop: The idea of “Connected Cities” of the Media Facades Festival Europe 2010 originated from the experience with the Media Facades Festival Berlin 2008 for which we invited artists and media designers to explore the cultural and communicative potential of Urban Screens by developing site-specific projects with public participation for mainly commercially used media facades in Berlin. We found that all digital screens had been operated through the internet which brought up the idea of interconnecting European cities with the medium of urban screens.

Silvia Bertolotti: What is your vision of the current situation of digital art in Europe? Is there a privileged or emerging scene?

Susa Pop: In my opinion there is a new emerging scene of urban media artists who demonstrate a social responsibility, leaning towards the public sphere and environment by using new technologies to give visibility to these social processes: an urban activsm to reclaim the streets (and the screens)

Silvia Bertolotti: How did the collaboration with the other European art centers start? Is it an experience that you would like to repeat in the future?

Susa Pop: We found the partners through our network and workshops to which we had been invited to beforehand. It was a really great experience to work with the partners of MFF2010 (Marie-Laure from iMAL, Brussels / Minna Tarkka from m-cult, Helsinki / Stefan Mittlboeck from Ars Electronica Futurelab, Linz / Nerea Calvillo from Medialab-Prado, Madrid, Ezster Bircsak from Kitchen Budapest). On one hand they were very professional which is important for a pilot project like MFFE and on the other hand it functioned very well from an energetic point of view. We have been working with a method called ‘Action Research’: planning  intervention  evaluation. From the very beginning we organised workshops, round tables, test screenings to develop the project in a collaborative process. It was an enriching exprience as we all worked for the common goal of realising the European Media Facades Festival but were also based in our local cities which shaped different conditions of political, cultural and regulative issues of public authorities and business models of the screensholders  it was a kind of comparative study. 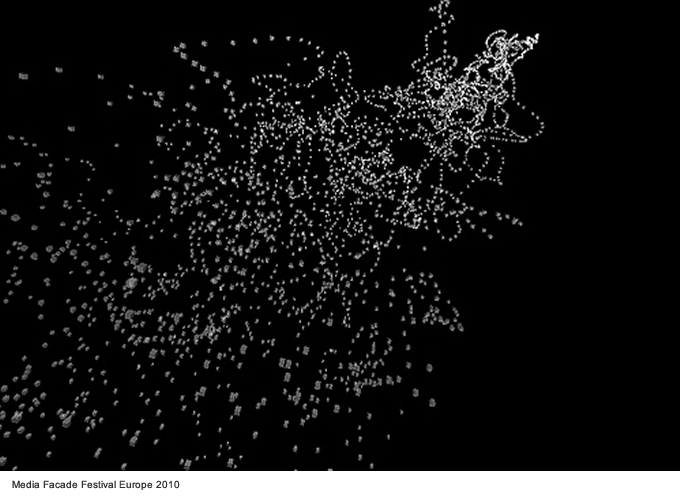 Silvia Bertolotti: Could you explain further the idea of “Human screens”, one of the central and most interesting themes of the Festival?

Susa Pop: ‘Human Screens’ was one curatorial topic which makes visible the processes of the human body in interaction with the media facade. One good example is Air Hunger by Hanna Haaslahti: people could participate in the projection by wearing a wireless breath rate-monitoring belt around their chest. The belt was given to one person at a time and he/she could walk freely in front of the projection area, while producing an undulating landscape in real time via the Bluetooth modem. The principle of visualisation of the breathing pattern is simple. Inhaling creates rising contours and exhaling descending contours ontop of the landscape. The breath-generated landscape carried a lonely character that moved along the slopes and hills created through the inhale/exhale pattern. Instead of being identified with the character, the participant created the condition for his journey.

Silvia Bertolotti: Why is the idea of “connected cities” so important in this project, beyond the technical use of joint broadcasting events?

Susa Pop: The main questions have been how to create site-specific content to connect the local public virtually with other European places. What are new artistic communication forms that function in a local and networked community and can contribute to intercultural exchange?

Silvia Bertolotti: Another theme of the MFFE is the building of communities, urban activism and the public interaction (a sort of 2.0 audience). What is the role of both technology and urban development in all this??

Susa Pop:Technologies like motion tracking cameras, mobile devices, software development set up interfaces / access with the media facades and the screens and create an interactionfield and communication platform for the public audience. Through the participatory process people start to communicate with each other. In the best case it contributes to community building and identification with the public place and its local scenes. 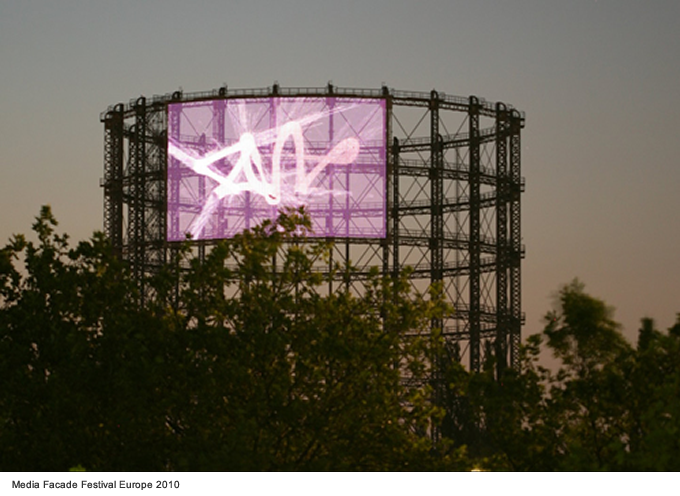 Silvia Bertolotti: I’d like to approach one of the key-elements of the MFFE: “Media Facades and Screens”. What is its importance and challenge in contemporary culture? Is it something, in you opinion, more related to new communications, digital arts or rather urbanism?

Susa Pop: Media Facades and Urban Screens is a new communication medium that lies between the spheres of public space and the digital worlds. The public audience acts on several medial levels: in the public space, as an actor on the digital stages of the media facades, in the internet and on the media facades of the networked infrastructure: Urban Screens are an interface format of new communications, digital arts and urbanism.