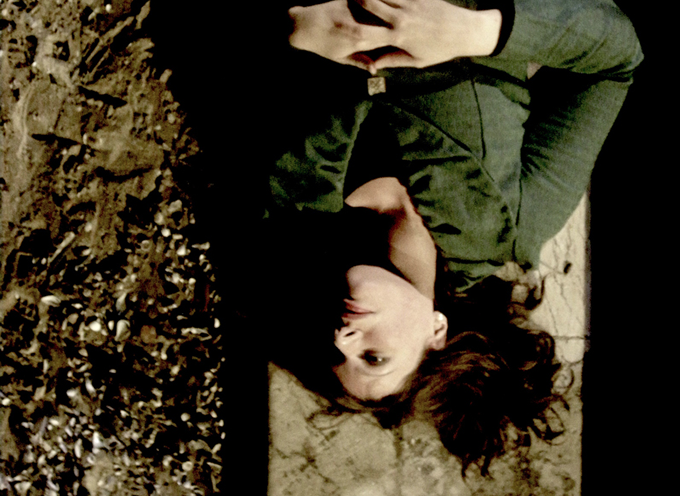 Maile Colbert is an american intermedia artist working between New York and Lisbon. She is director of Cross the Pond, an organization based on arts and cultural exchange between the U.S. and Portugal, works in collaboration with the organization Binaural [1] and contributes regularly with her articles on Acoustic Ecology and Sound Studies at “Sounding Out” [2].

Maile Colbert’s audiovisual projects also include dance, opera, text and other media. She is currently in production on an epic Interdisciplinary and Intermedia performance of a fictionalized and personalized Portuguese Maritime history grasping towards the definition of “home”; Passageira em Casa/The Passenger at Home, co-produced by Binaural and Cross the Pond, that is running 2012-2014 in Portugal, New York, Japan, Australia, and Brasil. For the artist “Intermedia” is a system, informed by sound, connected to other media in a complementary way. This intermediality affects also the technique of connecting media, often with sound and image coming together, live and in realtime and as response to a concept.

Maile Colbert has had multiple screenings, exhibits, and shows, including The New York Film Festival, The Ear to Earth Festival for Electronic Music Foundation in NY, LACE Gallery in Los Angeles, MOMA New York, Los Angeles County Museum of Art, Serralves em Festa in Porto, the REDCAT Theater in Los Angeles, The Portland International Documentary and Experimental Film Festival, Sons d’Hiver Festival in Paris, the Future Places Festival in Oporto, HOERENSEHEN 2.0 in Berlin, Activating the Medium Festival in San Frncisco, The Exchange in Cornwall, UK, the Störung Festival in Barcelona, the Teatro Municipal in Guarda, the Observitori Festival in Valencia, and has performed and screened widely in Japan, Europe, Mexico, and the States.  She was a part of a featured installation at the 2009 UN Climate Conference, and recently had an audio-visual installation premiere as one of the selected feature artworks at an exhibit in Guimarães, Portugal for the 2012 European Capital of Culture. 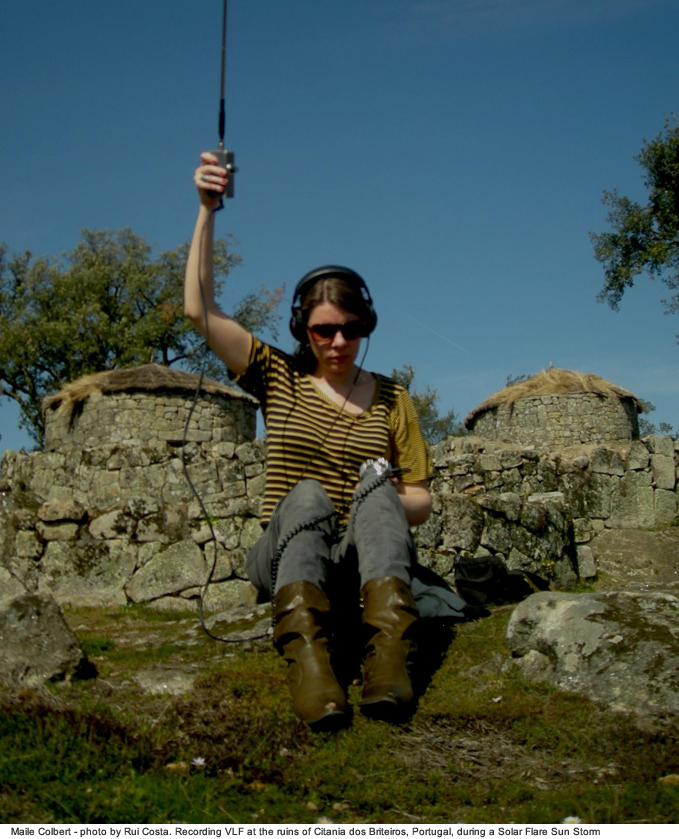 This interview departs from her recently launched album titled Come Kingdom Come, an experimental opera on millennialism and apocalyptic thought and theory. This album is one of the outcomes of a collaborative and complex process of media weaving.

Maile Colbert: I often describe my intermedia work as a “mish-mash”, or woven. To me,  working with different media or disciplines, each part is one part of a whole… like a system, or a composition. This stems out of my background in sound design for films, where you are weaving the audio with the visual. There is a Robert Bresson’s quote I love, that comes to mind when thinking about this: “Not to use two violins when one is enough”. There is a balance to be had within what is woven, a give and take between the elements.

Ana Carvalho: Conceptually, your projects are a (woven) result of personal experiences of the world, history and thought upon the world. The project Come Kingdom Come, for example, combines references to biblical apocalypse, to natural disasters and to the passage of the millennium. All of these are conveyed through text, sound and image. How would you relate the media used in this project with its content and come to this very peculiar as beautiful experimental opera?

Maile Colbert: Come Kingdom Come was originally intended to be a live performance highly collaborative and interdisciplinary in its production. The idea was to have many different perspectives and influences affecting the project, which felt important to the concept. For various reasons, this became impossible at the time, and instead of just placing the project on hold I decided to scale it down to an album. I loved the intimacy of the album as a format, and feel that as the project speaks also to the “personal apocalypse”, this gives room for people to put themselves into it while experiencing. 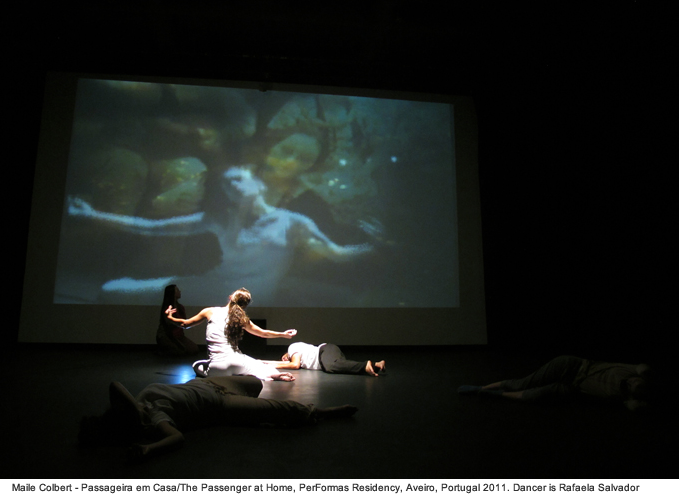 When the opportunity presented itself for the project to be a live production again, I didn’t want it to lose this personal and intimate space, so I decided for the images to be within a three-screen triptych, and for the sound to be in surround, live, and site-specific. I wanted for the dancer, Rafaela Salvador, to be live and working with the video artist I collaborated with on third screen: Jesse Gilbert. For a few years now I have been collaborating with Jesse, using a visual instrument he built that is MaxMSP based called SpectralGL [3]. I’ve used and worked with other platforms before, using various live video techniques that take audio information to process visuals, but this was one of the most beautiful and flowing systems I have experienced [4].

The “cheep cheep” sound you hear around minute 9:30 is the call of a single endangered bird in Brazil… those line movements are in sync, in realtime creations from the spectrogram of that sound. The same happens with the dancer a bit later, only with a live feed from a camera. She is moving to the sound while the image of her movement is being processed (by the same sound) and projected in-studio and in realtime so she is also influenced by the image, creating this way a truly intermedia feedback loop. I am obsessed with this woven quality of the media and that is very important to a project where, in its concept, interconnectivity is a major theme.

I think we all naturally gravitate to what’s in our tool box. I try to fight this, to a certain extent, at the initial stage of thinking and envisioning a project, as you don’t want limitations in that stage. In this sense, technology is not a focus until the planning stage, which occurs right before production. But it’s true, it depends on the project and sometimes technology is actually part of the concept. 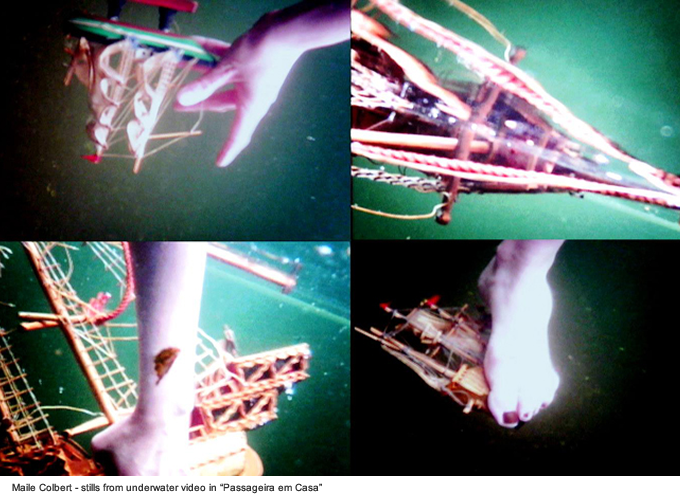 On the performance, there is a problem with the documentation. The video doesn’t show the beginning and ending where I move around the audience taking a live VLF feed and incorporating it into the initial sound. You also can’t hear the breath and chant that is happening throughout. I’m very actively working live on the sound. At certain moments (triggered by when I get nervous…as I still get nervous!) I go into a breathing and chant cycle that is audible to the audience.

With this project, there is no clear answer in the end, as it’s not meant to pose a clear question. The project developed as I incorporated more of an ecological perspective including recordings of endangered species and seismic activity. This happened when thinking about how we are one species of many and on our specific perspective as to what is The End. Life would continue, of course…meanwhile we are taking so much, too much with us. I think the project is more a contemplation than a question looking for an answer. Regardless of the opera being somewhat initially inspired by The Book of Revelations (amongst many other religious “endings” as well as scientific), I myself cannot claim a specific religion but something I do like about many old religions is the embracing of mystery. You don’t pose a specific question and you don’t expect a clear answer: you contemplate. The project is meant to put us in that space with its experience.

Ana Carvalho: The development of your projects, throughout each stage of development, results often from collaborative dynamics. How do you relate collaboration with intermediality?

Maile Colbert: That’s where things can get really interesting. By nature, I admit to being a bit of a control freak. The practice of collaboration did not come naturally to me at first, and I learned so much from working with others who I would consider masters at it, such as the Los Angeles based artist Carole Kim, whom I worked with often when I lived there. There is such an alchemy to art already and when you broaden the palate and add other media, other disciplines, other artists, you are letting in things like chance and challenge to your pre-conception of how a work will turn out and what it needs to get there. I embrace and love this now, and the in-between result that can come up with multiple minds or systems working together, whether in contrast or cohesion. Of course, it depends on the project and what the specific project is demanding. Unless I go into something with others from the very start, a project idea usually reveals which artists or what disciplines it needs to become complete. Collaborations can arise from a practical need as well, of course, and that is often the case with filmmaking, though my experimental works in this field tend to be more of a solo production. Again, collaboration always comes down to the particular needs of each project. 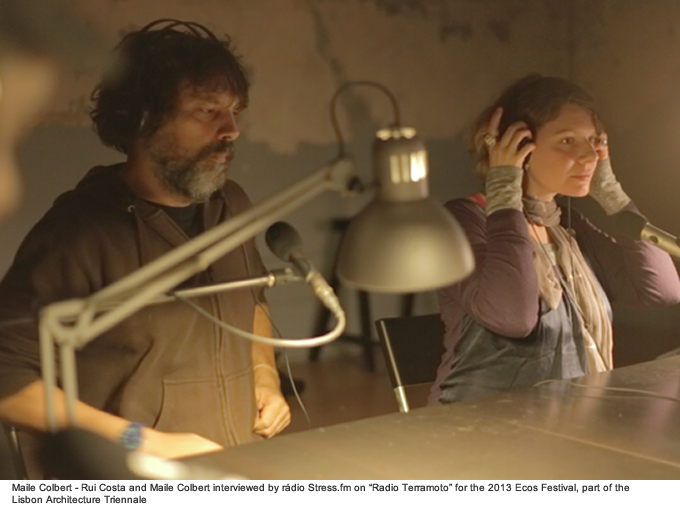 Ana Carvalho: Which intermedia artists (individuals and collectives) did influence your work as it is today (either contemporary or historical)?

Maile Colbert: What I think happens with intermedia work is that your influences tend to often come from outside the art world, from other disciplines.  But specifically intermedia and interdisciplinary work, Bill Viola, Joseph Cornell, Andy Warhol, and Maya Deren were my earliest and strongest influences. I went to high school in a small coastal town in Maine, United States, so I wasn’t exposed to fields such as video art, experimental film or sound art. I used to go to the town garbage dump and grab discarded pieces of wood, furniture, window frames, etc, and put them together in these large painting/sculptures. My first “experimental sound project” involved a small cassette recorder and the recording of sound of insects within one of these works. There are many artists I would say now really inspire me, but the great thing about working in collaborations are being inspired from within, by the people you work with.  That’s what has been strongest for me as far as influences of the past decade, whether writers or vocalists or electronic musicians or filmmakers. Each person I have had the honor and opportunity to work with has left a mark on and me, and I love to keep myself open to this.

Sounding Out!: The Sound Studies Blog

[2] Sounding Out is an online magazine about sound studies: http://soundstudiesblog.com