Meeting at the makerspace with fashion tech designer Anouk Wipprecht

In “The Diamond Age, A Young Lady’s Illustrated Primer”, a cyberpunk novel by Neal Stephenson, where a near-future world is revolutionised by nanotechnology, Constable – the protagonist’s adoptive father – asks her daughter Nell which path she wants to take: “conformity or rebellion?”. Nell’s goes: “Neither one. Both ways are simple-minded — they are only for people who cannot cope with contradiction and ambiguity.”

Somehow the path Anouk Wipprecht took in her life had to deal with some of the challenges which reminded me of Nell and, like her, she didn’t allow creativity to be sacrificed for conformity. Back in September I spent with Anouk a day wandering from location to location here in Milan, in order to meet all the appointments of her schedule and then perform at Meet the Media Guru, a series of events featuring international leaders in digital culture discussing a variety of topics from science to fashion and environment.

Her work as a fashion tech designer brings her all over the world, especially in the US, where a diverse range of companies like Intel, Samsung and Swarovski commissioned her installations and products mixing the futuristic aesthetics of digital fabrication design, with the most innovative components of wearable tech. Since she started working in this field 12 years ago, she’s been developing 37 projects mainly transforming dresses into interfaces: through the use of robotics and open hardware finally fashion starts talking to us.

During our conversation and her keynotes, it’s clear how for Anouk Wipprecht that fashion means mainly dealing with expressiveness and communication. Born in the Netherlands she studied fashion since age 14 even if her family, not having a wealthy background, would have preferred she’d chosen something more oriented to a “real job”, like being a lawyer or a doctor. In those days Anouk was into drawing and the act of sketching garments became a way to express herself and overcome her introvert attitude.

After a couple of years into studying, she realized fashion training was missing something, it was too analog to experiment in a more radical way. Her father worked with computers and coding but Anouk’s interest fell on robotics because it was more physical: “a robot could have a heart and a brain because as they are shaped like humans.  Putting a  robot on the body could allow my garments to become a better mean of expression of the identity and moods of the wearer”, she explains.

As interdisciplinarity and contamination was not yet a trend in those years, therefore her experiments with technology were not appreciated in the fashion school and she got kicked out. “I those days I was a bit lost”, she continues – “Then I visited some classes of one of my friend who was studying interaction design and discovered Arduino. It was during the first years of the Arduino project born at the Interaction Design Institute in Ivrea (Italy) and also fostered by a guy in Malmö, which then I realized it was David Cuartielles, one of the initial co-founders. 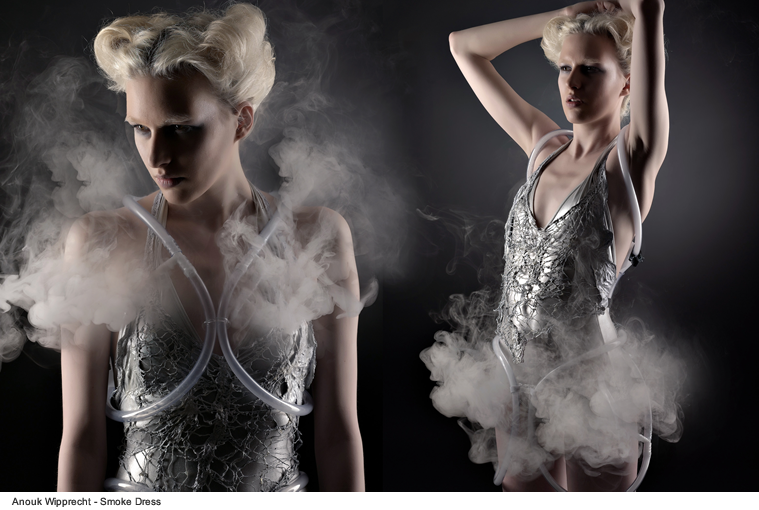 I decided to go to Sweden and participate in a workshop focused on understanding what people wanted to do with the open source microcontroller. I soon discovered how useful was to be in touch with an open source community, sharing projects, code and lowering the barriers to interaction design for people without an engineering background. And also how interdisciplinarity was key to my projects”.

“Back then Interaction design school didn’t know anything about fashion and conversely fashion schools didn’t have a clue about technology. And I soon realized that more conflicts you have, more interesting ideas come about.” she tells me in the middle of our conversation while on a taxi we rush to another location.

Eventually, Anouk went back to the fashion school, at least one of her teacher accepted her tech approach, and she was able to focus on the aesthetics of her practice because she became more confident around embedding technology. Her journey could keep going but it was not always so smooth. 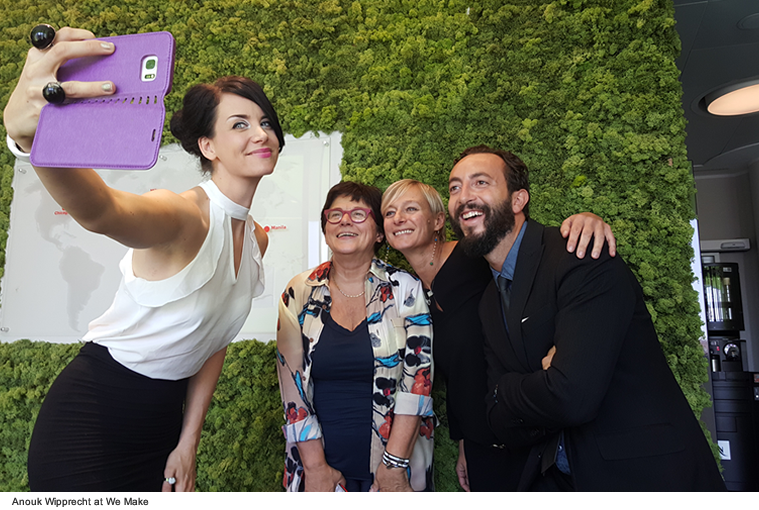 “If you’re not an engineer you’re often belittled both if you are a boy or a girl, but female feel more affected because tech is mostly a ‘bro culture’. Ten years ago, it was one of the first time I was going on stage to talk about my projects, and when I was in the crowd, composed mostly by men, I realized they supposed I was going to talk about marketing or something not technical.

I wish they were less judgemental. But now it’s weird because the situation is just the opposite. As I’m a girl dealing with technology I get invited a lot, sometimes just because I’m a female. It has become extreme again because it creates awkward moments as you think you’ve been chosen just because you’re a girl.”

Anouk’s early works like Smoke Dress and Spider Dress are mostly dealing with creating a higher state of connectivity with people around us in a nonverbal way. While the first, a fully 3D-printed dress, automatically creates a veil of smoke whenever someone enters the personal space of the wearer, the second made of the animatronic limbs which move up to an attacking position when someone approaches the wearer too aggressively and create smooth gestures to welcome the calm visitors. 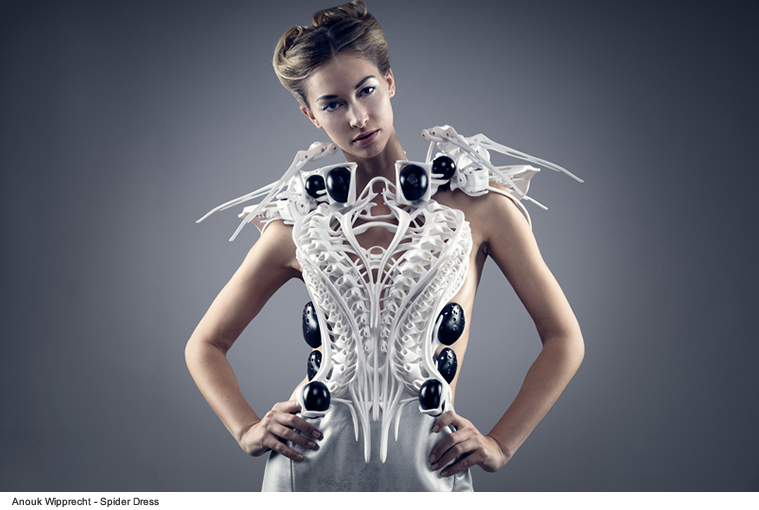 Wearing these dresses makes it easier to show when the person feels uncomfortable and expressing the feeling without saying a word. One of her recent projects is focusing more on health. “Mental health has not been researched enough. The projects I do could be an inspiration to look at some issues in a different perspective.  The Agent Unicorn project for example explores the behaviour of children with ADHD, kids who are a little more busy than other people and specialists tend to say they have a disease, and I believe it’s wrong.

If your child is more engaged and curious about the world compared to others, doesn’t mean you need to give him medication, but that’s what’s happening in the United States. The Agent Unicorn project is a device I created to show to kids how their brain works because for me, in the long run, creating a learning system is better than dumbing them down with pills”

Agent Unicorn is a 3D printed hairband shaped like a horn and equipped with a camera and EEG (Electroencephalography) sensor. It’s playful and comfortable at the same time so kids are happy to wear it. When the EEG sensor gets a strong signal, the camera turns on to record the child’s view in the real time experience. In this way the device can give a better understanding of what excites or distracts the child in different experiences. The project was developed during her stay at Ars Electronica Futurelab where she teamed up with a group of neuroscientists and technologist to explore  a  way  for  children  to  wear  medical  devices  with a different state of mind thanks to a  fashionable  esthetic  and their involvement in the exploration of their attention span during the day. 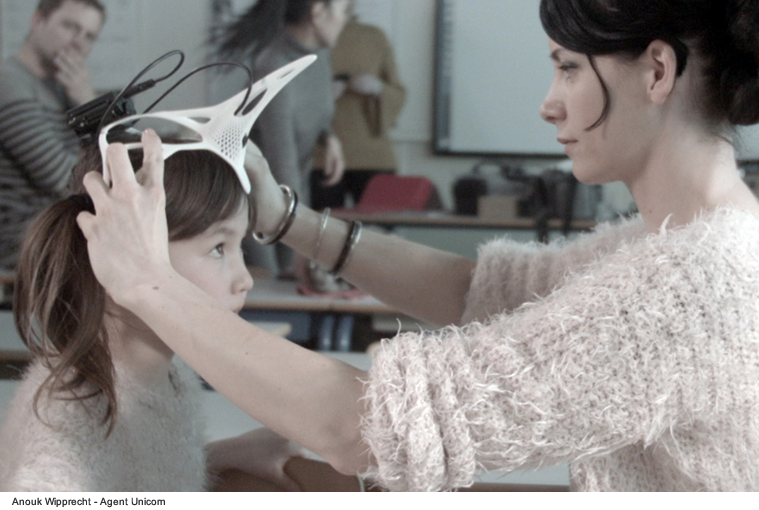 Like other projects, also Agent Unicorn will be open sourced and documentation released online: “I often open source my projects to allow the community to make their own and give me feedback, as it’s especially important when working on medical-grade devices which has accurate measurements.

The sharing aspect is a very important part of my work because I wouldn’t be like what I am today if I could not access a lot of open source knowledge. I also like to explore more radical ideas and, as an artist, I can have some effects on the healthcare industry if I make more projects like this. It also allows me to make some sensible topics open to discussion.”

Our conversation goes on reflecting on how quite often innovation happens when you look at things in a different perspective. A problem that has not yet been solved, an innovation we are still waiting for, for example, is how to wash garments when they embed electronics. If you try to solve it just looking at the electronic components and how to make them washing-machine-resistant, probably we’ll never solve it. 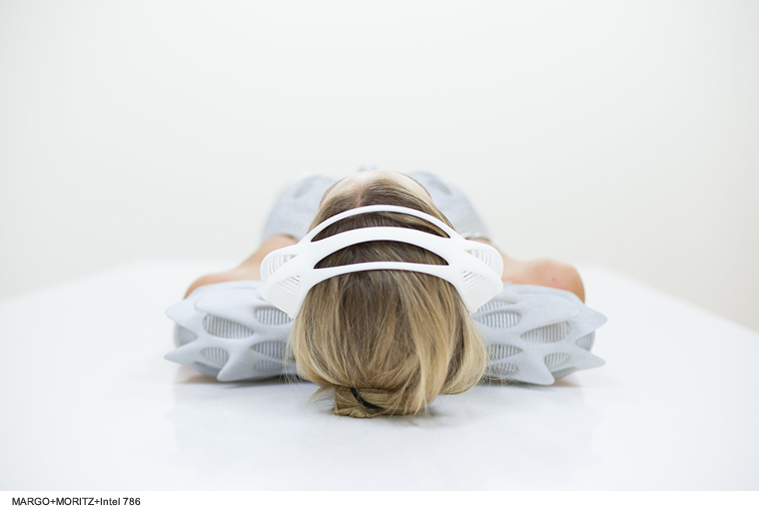 But what about designing a new type of washing machine with the ability to clean without water? Wearables still face a lot of limitations to become real consumer products because of issues like energy consumption, maintenance and washability but maybe it gets easier if we just imagine a washing machine suited for electronics.

“Just imagine you come back home and you put your garment in a closet where it gets charged and dry-washed” says Anouk. And that’s a good point: we should start asking the questions to the right industries and build a collaboration between different sectors if we really want wearables to become widespread and involve the community  to create an ecosystem of devices which are open source, customisable and fixable by a network of local makers in hackerspaces, makerspaces and fablabs.

Otherwise, wearable dresses and devices are going to just inhabit the territory of exclusivity and luxury:“The area of fashion technology started to attract interest firstly of tech companies – explains Anouk – Fashion companies have been raising attention later, only since 3-4 years ago. But right now the business model of fashion is based on a fast In&Out process so it’s pretty hard to introduce technology in it because you need much more time to make a tech garment and it would be economically unsustainable to induce obsolescence at the end of the season. 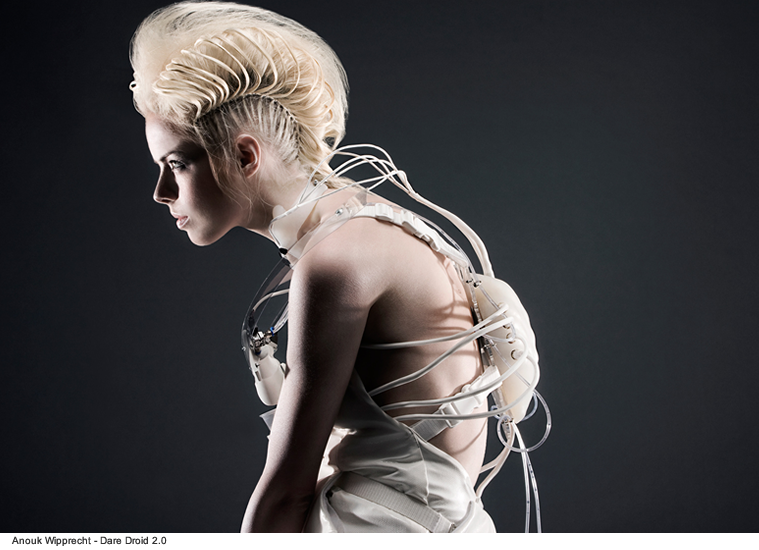 With high-end garments and couture fashion audience, it could be easier because the focus is mostly on the artisanship and craft applied on a garment, and you can add up also the value of interaction and embedded technology. But I’m not so focused on creating luxury garments for wealthy people which can afford them.

I’m more interested in experimenting with people with special needs and create projects that are more accessible to a wider audience. How can my projects help kids with ADHD or adults with dementia or depression? I think that reflecting on how to make wearables commercial and consumer-proof rather than exclusive it’s a better conversation to have.”