Paolo Cirio created a database with 4000 faces of French police officers to crowdsource their identification with Facial Recognition technology and through the platform https://Capture-Police.com

Cirio also printed the officers’ headshots as street art posters and posted them throughout Paris.

The project Capture comments on the potential uses and misuses of Facial Recognition and Artificial Intelligence by questioning the asymmetry of power at play. The lack of privacy regulations of such technology can eventually turn against the same authorities that urge the use of it. With this artistic provocation, Cirio shows how the technological power of Facial Recognition is excessively dangerous for society and even for the police.

With this action, Paolo Cirio introduces a campaign to ban Facial Recognition technology in all of Europe in collaboration with privacy organizations and policy makers. Cirio researched this legal matter and wrote a petition to mobilize citizens, organizations, and the press to lobby against it and ultimately ban Facial Recognition in all of Europe. This technology is already in use in several countries without transparency and accountability. Join the campaign here. 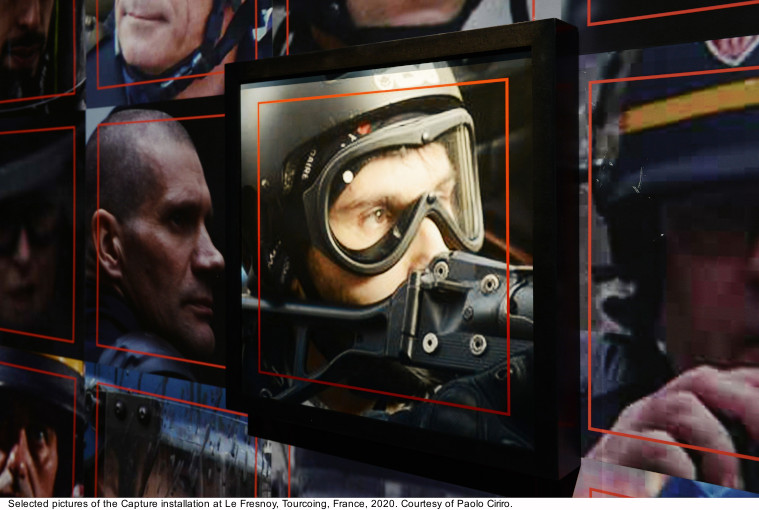 The police call for the use of Facial Recognition on protesters, minorities, and civilians, while they make themselves unidentifiable in public confrontations. In this project Facial Recognition turns against the same public authorities and law enforcement looking to justify the necessity of it. Cirio collected 1000 public photos of police officers taken during the protests in France and processed them with Facial Recognition software to profile over 4000 faces of officers. All the pictures were taken in the public space, either found on the public Internet or acquired from members of the press. This is something similar to Clearview AI, an American company that scrapes images from the Internet and profiles faces and sell such data to law enforcement agencies. 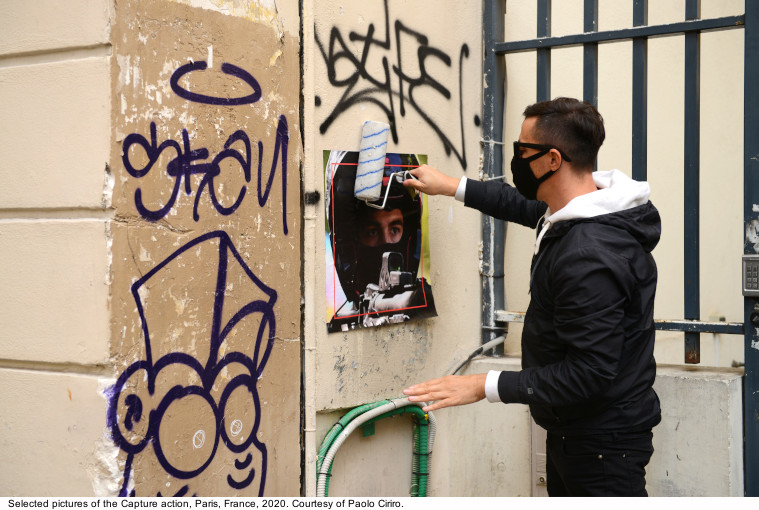 The ethics, politics, and aesthetics of the technology, intervention, and photography in this art project aim to resolve the perplexity concerning the notions of transparency, privacy, and the autonomy of citizens and officers. The paradigm of the powerful watching and the powerless being watched is reversed. Cirio questions the boundaries of this act, beyond the provocation and the intervention, he works for regulations and ethical debates on power imbalances, accountability, and social justice.

Ultimately, for this project, Cirio produced a short video documentary about Facial Recognition and Artificial Intelligence with the youth journalism agency Labo 148, featuring the action for the campaign along with interviews of experts and activists.

For the art installation, Cirio selected 150 faces to compose a matrix of prints on a 15 meters wall. Over this background, seven fine art prints feature unidentified officers in the act of shooting at protesters. The audience find themselves in front of a firing squad and a ferocious crowd of police officers. This large-scale installation will be presented for the first time at Le Fresnoy from October 15th.

For this project, Cirio created partnerships with La Quadrature du Net, We Sign It, Labo 148, and collaborations with several other privacy organizations.

More with the hashtag #BanFacialRecognitionEU