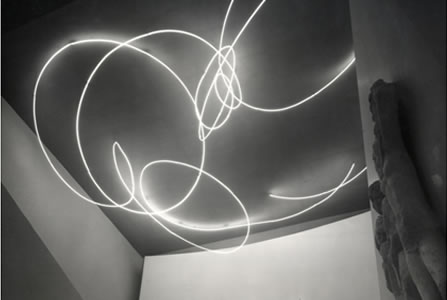 An exhibition inspired by the writings of Lucio Fontana and the Academia Altamira
Including works by Mel Bochner, R. Luke DuBois, Michael Joaquin Grey, Yael Kanarek and Matthew Ritchie.
Curated by Laura Blereau

Bitforms gallery is pleased to announce Spazialismo, a group exhibition that examines Lucio Fontana’s concepts in the 1940s and 50s about how we consider structures of space in the modern, yet natural, world. The exhibit is also intended to serve as a vehicle for contemporary review of Spatialist texts – such as “Manifesto Blanco” (1946), “Movinetto Spazialle”(1948), “Manifesto tecnico della Spazialismo” (1951) and the enthusiastic “Television Manifesto” (1952).

In 1946 Fontana founded the Academia Altamira in Buenos Aries. An avant-garde art school, its aim was to promote the idea that a new art was necessary to reflect the modern world as revealed by science. Aligned with the Baroque tradition of depicting dynamic spaces of plastic movement, Fontana’s ideas were also concerned with phenomenology and continued dimensional discovery of Nature, of which man is a part. 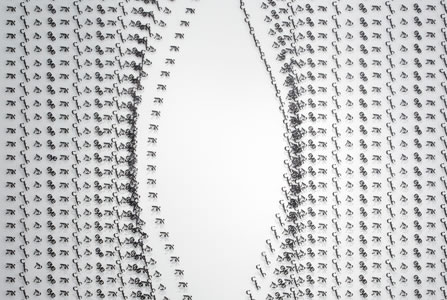 The triumph of film… is a definitive evidence of the direction that the spirit has taken toward the dynamic. In praise of this transformation in the nature of man, we abandon the use of the known forms of art and move toward development of an art based upon the unity of space and time. Movement – the property of evolution and development – is the basic condition of matter. Matter exists in movement and in no other form; its development is eternal. The simultaneous development of the phenomena of color and sound are what integrate the new art.

The subconscious – which houses all of the images perceived by intelligence – adopts the essence and the form of these images and accepts notions that give form to the nature of man. The subconscious shapes, completes, and transforms the individual. It gives him the orientation that he received from the world and that the individual adopts when necessary. Society tends to suppress the separation of these two forces in order to unite th em into a single and greater form; modern science bases itself upon the progressive unification of its branches. This new state of consciousness gives rise to an integral art in which being functions and manifests itself in its totality.