Art and the Mobile Phone 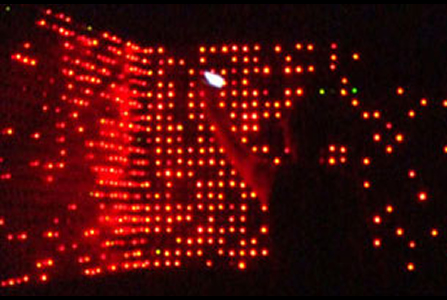 Cell Phone: Art and the Mobile Phone explores some of the groundbreaking works that are being created by artists today using cell phone technologies. These works engage such features and technologies as camera phones, video phones, global positioning systems, Bluetooth technology, ring tone sounds, and messaging.

Artistic interest in mobile phone technology lies not only in producing artworks for individual handheld devices, but in the potential of mobile phone technologies to create works that can be performative and participatory. Often created without the traditional systems of art world distribution or exhibition in mind, these works look beyond the walls of a gallery and move art into the dynamic realm of mobility, interaction, and global connectivity.

Cell Phone features an international group of over 30 artists and artist collectives representing the range of artworks being created with and for a mobile phone device. Some of the works in Cell Phone take the form of a sculptural object, like Beatrice Valentine Amrhein’s Videos Lustre (2006) which features dozens of cell phones hanging from the ceiling like a chandelier, each running a short film on the cell phone¹s screen.

Other works, like TXTual Healing (2002-2007) by Paul Notzold, or cell:block (2007) by the artist collective URBANtells, invite the audience to contribute content to a work through text messages or photos sent from their cell phones. Another category of works in the exhibition include those that involve downloading a program, a video, or an image to your mobile device. Angie Waller¹s clip.fm, for example, expands the communicative possibilities of cell phones through a series of narrative animations that can be downloaded and sent to friends instead of a text message. Other works like Mark Shepard¹s Tactical Sound Garden (2004-2006) or Blast Theory’s Uncle Roy All Around You (2003) introduce software to a mobile device that allows audience members to participate with others in an interactive performance. Making a call from a cell phone will connect visitors with yet another group of works in the exhibition.

Talking on a cell phone while walking through Informationlab¹s room-sized installation Cell Phone Disco (2006), for example, will make visible the aura of an active cell phone’s signal by creating a trace of blinking lights on the gallery walls. In other works, a phone number will be given to access pieces such as Steve Bradley’s Call & Response: HydroSistrum which will invite visitors to dial a number to listen to data related to the ecology of the Chesapeake Bay, including information about water quality, currents, and temperature. Cell Phone: Art and the Mobile Phone is accompanied by an audio guided tour accessible via cell phone.